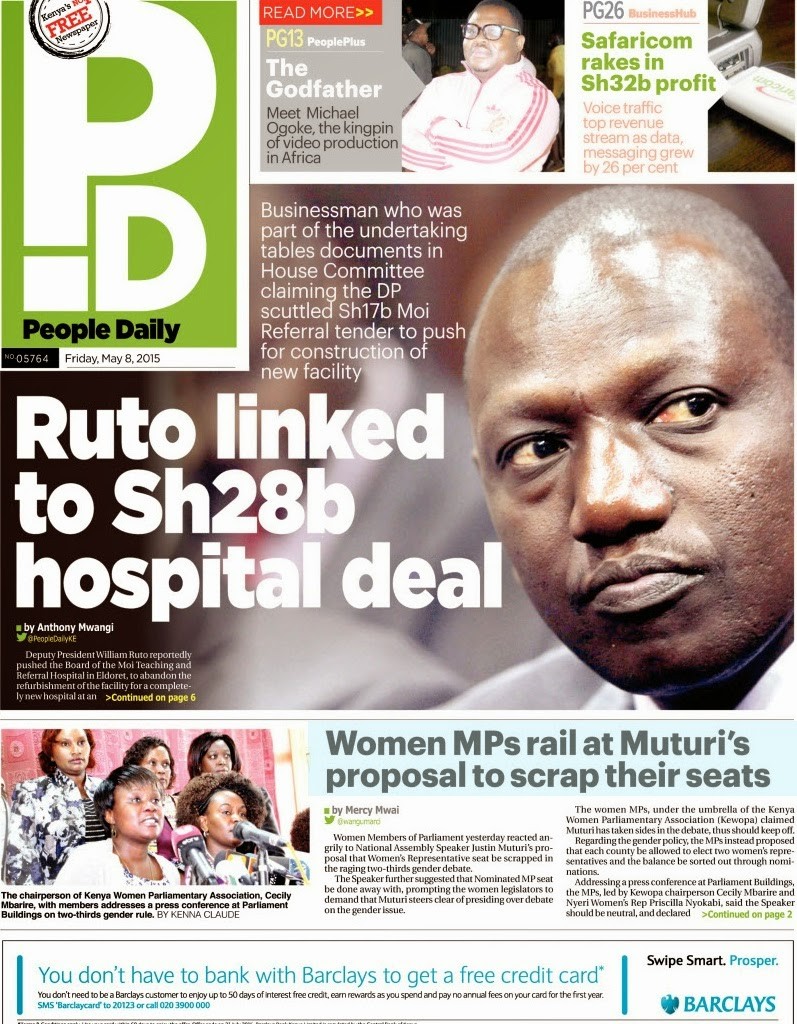 Recently President Uhuru Kenyatta slandered newsprint and the noble art of letters for the second time through widely televised news channels. It was a cheap shot. Implying that Kenyan newspapers would find better use as wrapping paper for meat in butcheries. The context was reaction to a headline story alluding to improprieties by the Deputy President.

Granted, some outlets sell glamorized content that serve little for National acumen, not all content in print is valueless. Of note! However! – When alleged major media investors trash their own products and further state their actual purpose- meat wrapping. We the citizenry ought to pay attention. Folks are tired. A laissez faire attitude has noticeably crept in since the advent of 3G. Most are watching Kenya from a distance while domiciled within it. Nairobians generically express resignation in one condensed phrase. “Hapa ndiyo digital migration imetufikisha”

Politics has been reduced to a brawny game of opportunism. On the podium, its showmanship – we the citizenry – a willing audience. In yester years the Journalists Union would not have passed up the opportunity to furnish a scathing statement. Exercising constitutional right to reprimand and demand a retraction on our collective behalf. These days, it is every man for himself as Joshua Sang reminds us.

Really good journalism draws detractors. In the business of journalism, you are no good if you cannot make a few enemies. It must be noted that the public was not quick to defend the press either. Local press corps are inundated with accusations of incompetence. Kenyan stereotypes of a journalist are one of a dweeby guy with a note pad lurking in the corridors tapping into the freebees with intel on all events with open bars. Furthermore social media has elevated this slothfulness into fashionable reading. The ability to discuss American fads with familiarity is considered chic.

As a result, the public’s faith in mainstream media is shifty, with no allegiance. The newsprint audience is extremely picky. They tend to settle for a panel of consistent media voices and single source their news. Everyone else is relegated to dicey until they pass the test of consistency and longevity. Mainstream press has lost its monopoly over opinion. A new breed of citizens with clout on social media now consider themselves smarter than journalists. A random sample of popular posts of social media reveals a profusion of “experts” and “aficionado’s” who can explain the context of a basic headline story in 140 characters and still find room to lord their uninformed opinion.

In essence, the President’s dismal of newspapers is good for the profession. When a president gets cozy with journos, credibility issues arise. Much like an opposition figure getting invited regularly for ugali and nyama choma at State House, Floyd Mayweather and Manny Pacquiao hugging before the hyped bout or Tom and Jerry cozying up. Traditionally the Government and the 4th estate should maintain a healthy distrust for each other. It is all about monitoring the balance….and very necessary for business.

A village based intellectual who references Sam Kahiga and Terry Hirst (From the Golden age of Kenyan journalism) predicted that once socialites made it into the dailies, serious news commentary would retreat to local bars. Tabloid journalism makes good business sense. It is now! In real time and a new generation is driving the news cycle.

Amateur videos are breaking news by the minute challenging mainstreamed versions. All sides are now on the table in visuals. Teenage YouTube favorites doing hair register views that newspaper circulation chiefs would kill for. It is a different terrain. If it does not break on Facebook or Twitter, it never happened. In this explosive digital reality, the competition eats you up for lunch.

In age of digital media, the print cycle is analogue. Slow. Any newspaper that has not migrated is missing the boat. By the time the stories are pooled, sieved, dressed and presented as fresh news, the cycle has expired.

Consequently, to compete the face of print has to adapt. Print is no longer the first option for news. I meet folks on the street who demand to know why I stopped writing. My reply typically is, “Actually, I write a column in Crazy Monday magazine”. To which the response is, “I rarely read a physical paper these days?”

The days when pioneers Hillary Ngweno, Wahome Mutai and Paul Kalemba ( Maddo) stuck out their necks for story are now folkloric. These days we only stick necks out for social media ratings, gushing over likes, retweets mentions, interactions, impressions and views.

It is therefore easy to overlook several dependable journalists, constantly putting their reputations, bodies and lives on the line for a story. They work against incredible challenges and in hostile environments with no insurance from their employers. When the stories are aired, they are bombarded prejudicially, trolled, sued, abused and physically threatened. It is a life they have chosen, one of service. In pursuit of the story they continue over and over again no matter what the odds.

It is those men and women who keep the faith and keep returning to the blank page that I salute today.