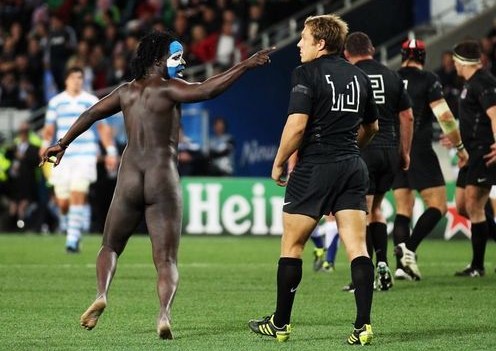 There used to be one soft drink advert they run on television a while back where one of the lead characters gets so agitated by the results of a soccer game they were watching that he stuck his foot through the telly in disgust. Next we know he is leaving our screens on stretcher, his foot still stuck in the telly, muttering his team’s anthem.

It might be a surprise to you but the average guy isn’t too far removed from the seemingly deranged character in the soft drink advert. How come guys care so much about sport? It is a tough one, because sometimes we behave like we are deranged when our favourite team loses, drinking, moaning and becoming depressed for days. My mother used to tell me I was crazy, but as far as I was concerned, this was normal guy behaviour. I mean I could name my child Rudisha Bolt Pala and be considered only mildly eccentric.

What is about football that brings even the most wayward of husbands home the night Man United is playing the final. Why for example can’t he engage in family responsibilities with the same gusto? There is a complex and before you accuse me of being some tea-loving, arm chair critic please! Do note that I am a sports guy as well. Okay, granted I have not been competitive sports in years but I care as much about sport as the next guy. If I were put in the same room with the man of the century, Nelson Mandela and in the corner was a TV set showing a rugby game between two captivating sides, such as the Boks and the All Blacks, I would be frequently distracted from the world’s favourite grandpa, as I gravitate slowly towards the screen to become more engrossed in the rugby game and miss out on Madiba’s precious nuggets of reality.

Obviously sport connects with something deeply rooted in the male psyche.  The conventional wisdom about sport is that it is valuable beyond the experience itself, that it builds masculine character. The great chunks of their lives that men spend as spectators of sports can be partly explained, of course by intrinsic interest. Professional athletes are often incredibly elegant and even high school sports tournament are filled with high drama and can be a delight to watch. But seriously, game after game, sport after sport, season after season, it can’t be that interesting. The same moves are made, passes thrown and caught, championships won and lost. Visual, aesthetic interest alone is not enough to explain the emotional commitment of male fans.

For guys sport provides a kind off state religion, something they can care about and share it in a way that reaffirms the most basic component of their identity. While growing up, singing the school parade grounds every week stirred nothing within- in the end just another school exercise. But in college on Saturdays out on the rugby grounds, waiting for Mean Machine – the Varsity side to take on the ‘enemy’, it would have seemed to me an emotional thrill forsaken, if we had failed to rise to our feet to celebrate the institution in song by singing along to the club anthem that had given to this disparate collection of men, so grand and beautiful a game.

I guess this aspect of male preoccupation with sport, although pathetic, is more or less benign. The darker side of it though is that because the subtler, personal rewards and pleasures of sports are played down, in fact often destroyed by this approach, the pursuit becomes a never ending one; one’s sense of achievement depends on entirely on winning. Absolute team loyalty, unquestioning obedience to authority, respectful fear and hatred for the opposition, disregard of individual injury and suffering all justified in the name of victory- these are the axioms of the sport system.

So I don’t about the rest of you guys, but I think it is about time, I put some perspective into my life. First thing after the Barclays Premier league season, I am going to start paying more attention to things that should matter to me like my work, friends and above all my family.

7 thoughts on “Why Do Men Care So Much About Sport?”