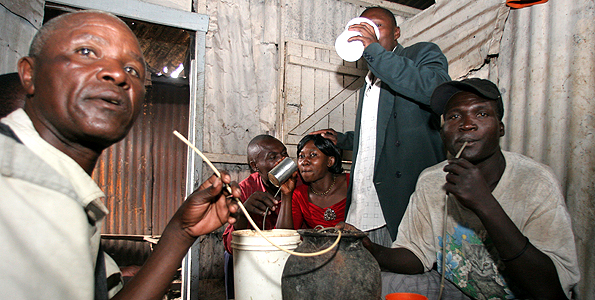 Very recently, scores of men from around country died. The cause of death was alcoholic poisoning. By the end of the week, the body count had built up to 100. They were mostly faceless men, rural dwellers or the urban underclass whose misfortune only caught the national attention for a brief moment. They were forgotten in under a week. The death of 100 women in one blow would have traumatized the country.

The whole incident is somewhat representative of how worthless some men lives have become in the national psyche. The prevailing stereotype is one of a bunch of layabouts, who probably abuse their wives, molest their children and harass everyone else in between. Poor bastards. They had it coming. Every village in this country has its version of a hopeless drunk and a tale of their lost cause. That is the established narrative of lower class alcoholics. We have somehow reduced the complexity of Kenya’s drinking culture to a single story. Drunkards are tolerated and prayed for. That these alcohol ravaged men could be causalities of an intricate industry beyond their comprehension, never arises.

The social experts tried to make sense of the tragedy. These alcohol related deaths were a clear indicator of the masculinity crisis, someone offered.  It was stated that Kenyan men felt intimidated by the strong, independent, smart and well educated women in their lives. Their roles had diminished and the feelings of inadequacies had driven them to drink. Combined with the economic hardship, the desperation to drink turned them into mindless consumers who would drink anything that guaranteed a quick high for cheap.

It is a lot easier to blame the victim than grapple with the problems that put them in this self defeatist position. Why is it difficult to fathom that Kenyan men drink, because they enjoy alcohol. Drinking is an integral part of our cultural functions and a social lubricant. Put a bunch of guys in a room and conversation will be stifled. Throw a round of drinks and you will be amazed how open the men become. Alcohol encourages camaraderie and bonding, all essential components of a man’s life. Alcohol is associated with patriotism and a national beer is a powerful symbol. Lately, a leading corporation mobilized a team of celebrities in a game show to transport a bottle of beer to one of Kenya’s top sportsmen living abroad.  Alcohol in this case, was the unifying character of healthy national values.

I suppose we forget that alcohol is a government controlled drug that is peddled without a warning label. Most of the restrictions around its sale and consumption are designed to protect the profits of the manufacturers and the regulators. Since the populace is pretty much addicted to it, the manufacturers’ and the regulators ought to educate people on how to use their products. It is not enough to preach responsible drinking. Citizens have to be taught to partake alcohol in the same rudimentary way men were taught how to wear a condom using wooden models in AIDS prevention campaigns. “This product induces feelings of euphoria, relaxation and happiness at the rate of a bottle an hour. Anything beyond this measure could result in impaired thinking and vomiting”. Alcoholic rehabilitation is a privilege of the upper class. The rest have to man up and learn to hold their drink or slide down the slippery slope of alcohol addiction and destruction.

OF TINTED WINDOWS AND A TALE OF TWO CITIES 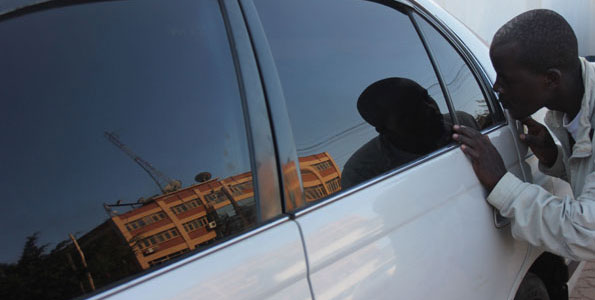 Inspector General of the police David Kimaiyo set #KOT, Kenyans on Twitter off in a tweef. The breaking news report announced an order to impound all vehicles with tinted windows. The reactions were fast and furious. The hashtag  #tintedwindows became a trending topic and Kimaiyo felt the full wrath of the Kenyan middle class who are acutely aware of their rights. People questioned how the invasion of privacy would aid in the fight against terror and the absurdity was punned. The lawyers retrieved the exact clauses in Traffic Act and pointed out evidence of the illegality of the directive. Court injunctions were about to ensue, when word went around that only public service vehicles with tinted windows were to be impounded as part of the war on terror. Suddenly, the directive had some merit. Public service vehicles make easy targets for terror acts. They ought to suffer the conquests of not complying with the law irrespective of the inconvenience to the otherwise law abiding vehicle owners.

Social media has become the new Tahrir square of Kenya’s middle class. Issues that are pertinent to their welfare are tackled passionately. Those that do not directly affect the comfort zone get a fleeting mention, often only good for the puns it can generate. As a result the social conversation, at least in mainstream media is dominated by middle class issues. Many sections of Kenya’s populations have really no voice in the media. They appear as helpless, unidentified victims of the prime time news orgy, profiled by their ethnicity, religion and lower social stations. They suffer the brunt of impulsive government directives and have learnt to cower in silence. The middle and upper classes do not run into the same obstacles of low income earners and the frustrations that separate them from the lower classes are generally invisible to them.