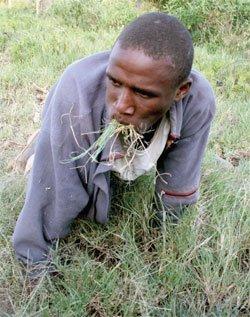 One of the most commonly repeated witness accounts after the Westgate tragedy was how frequently we heard the statement, “we thought it was a normal robbery”. In good old Nairobbery, gunmen shooting up a place in broad day light are normal affairs. We have generally learnt to how to mind our business and keep out of the way of other people’s problems.

In reality, if you haven’t been carjacked, mugged, had your drink spiked, lost a phone or least paid a bribe against your better conscience then you are still yet to earn your stripes as a true Nairobian. Either way, ‘touch wood’ because someone out there is eying your cell phone. Thugs could burst through your local hang and order everyone to lala chini, wallets and cell phones in the air and it is not unusual to get clobbered for presenting a cheap phone.  The good thieves will be kind enough to leave you with your sim card because losing all your sim contacts is an unbearable inconvenience. These are normal occurrences.  Every Nairobian knows about a mulika mwizi. That back up phone you acquire after your smart phone gets snatched as you save up to upgrade back to a status phone.

There are a number of other things that are quite normal in this city besides robbery. Sudden potholes emerging out of a major highway overnight and growing by the day into large craters that would be more suited to fish farming is fairly normal.

Traffic jams are a way of life. Idiots overlapping, refusing to give way at roundabouts and generally being a nuisance on the roads is a feature of the city you get accustomed to. A normal day begins with at least half a dozen matatu drivers side tracking you in traffic.  Tens of people die in road accidents almost daily because the bus was overloaded, speeding, malfunctioning and the driver fell asleep on the wheel and the incident will be filed as yet another normal road tragedy. It is quite normal for a traffic cop to ask for a bribe. It is the language of negotiation and unless you are from out of town, you will understand that it is an issue of convenience because justice takes its sweet time in these parts. Power blackouts are normal. You never know the time nor the hour but when it comes to electricity, sooner rather than later, you come to appreciate the simplicity of a candle lit dinner.

Politicians behaving badly, is a normal occurrence. An occasional scandal here and some abusive language there is the kind of regular content that guarantees a captive audience during the news hour. It is a normal expectation for the head of state to surround himself with cronies from his ethnic backyard. A little flare every five years is just normal election violence that is really no big deal and unless it involves ‘your people’.

On numerous occasions the authorities will lose sleep over the latest national crisis, constitute a committee and if the report never sees the light of day, no need to worry. That is quite normal. Normal is the default mode of coping with the numerous stresses that the city throws at you. The lack of power in the face of these daily challenges brings about a deep sense of resignation and apathy.  But in Nairobi, these feelings are normal. 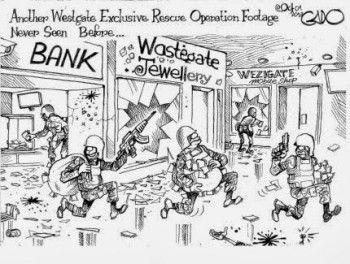 It is becoming quite apparent that our celebrated defense forces were rather hands on during the Westgate siege that saw Al Shabaab affiliated terrorists’ rain havoc on our otherwise peaceful lives. Having never witnessed the military in close combat, the aftermath of their involvement during the four day city mall siege was rather disturbing. Accusations of looting and rampant destruction of property paint a picture of a force that expends energy in all the wrong places. For property owners in swanky mall, it was case of being caught between ruthless terrorists and greedy patriots. A cash box too many disappeared. Shop owners claimed that they stripped bare and they are not accusing the terrorists. The calculated pilfering of a building supposedly under the guard of the country’s elite forces should be very worrying. It is a major symptom of a systemic illness and a rapidly infectious national malady that celebrates greed and violence.

When one steals in an official capacity, it will be described as a redistribution of wealth. It is merely our patriotic duty because no one really bothers a rich thief in this country. It is the petty criminals that suffer the brunt. We generally live by the principle that greed is good and if you want to steal then steal properly. Kenyans look down upon modest thieves. Anyone who gets nailed for stealing loose change would be considered foolish and a candidate for mass lynching. We live by a strange code of honour among thieves and the biggest thieves are admired for their audacity. The likelihood of the looters at Westgate getting away with the crime is high. A scapegoat or two will be arraigned to serve as example but given the long history of officially sanctioned corruption, looters can only be accused of picking the crumbs off the table.

3 thoughts on “Where Absurd Is The New Normal”