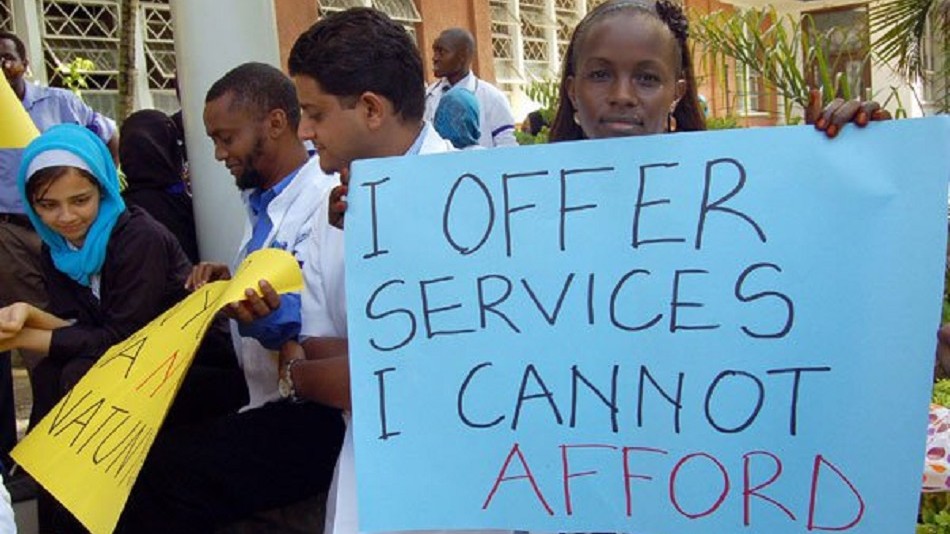 We seldom realize the value of health until we lose it. In a way the nationwide doctor’s strike should have served as an apt metaphor for a sick nation that has taken its health for granted and now has to reckon, late in the day, that a steady daily regimen of panadol tablets cannot keep disease at bay. The doctor’s strike should have shaken the country out this stupor and forced us to ask our leaders some hard questions.

The doctors rallied their numbers to say, “We are sick and tired of getting shafted” and in typical Kenyan fashion, fighting for one’s rights, is the epitome of self-sacrifice, unless you are a politician. Those for whom one fights will first ignore you, then despise you for messing up their day.

A friend would describe a scene, during the #TakeBackKenya demonstration on Jamhuri day. As they hit the streets to protest about runaway corruption, a crowd of people gathered across the street to stare at them as though they were a circus act. One man stepped up and asked, “ Nini inawasumbua” (What is your problem?)

It was not that he did not understand the national catastrophe that is corruption. No, he was speaking out of a learned helplessness. That there was nothing ordinary people could do about it. Better to get on with life, fending for his living than risk getting clubbed by police protesting on behalf of a public beaten down by apathy.

When the police eventually descended, my friend ran across to the next street and it was though he had entered a different world. On Moi Avenue, running battles and tear gas ensued. One street away on Tom Mboya street, Nairobi was bustling with people going about their business totally oblivious of what was going on merely a street away.

The general public has treated the doctor’s strike with the same manner of distance. There is a problem out there but as long one is not affected, directly, the best they can do is mind their own problems. We live in a country with an ingrained sense of individualism. It is every man for himself and God help us all. We wish bad luck away and hope and pray that the tragedy that befalls a neighbour never comes knocking on one’s door.

The fact is that most people are too poor to afford falling sick. My barber told me last weekend as he kneaded by my scalp, that this is simply a bad time to fall ill. If he survived, which he reckoned was a 50-50 gamble, he would probably end up in financial ruin. Private hospitals are out of question. The costs are so prohibitive, he might as well sell his liver.

For ordinary Kenyans, public healthcare has always been a life and death deal. In Kenya’s rural areas, people die of treatable ailments like malaria all the time. When an ailing man starts coughing continuously through-out the night, the cash strapped caregivers, start to plan for a funeral.

Which is deeply ironical, because when it comes to death, funds are easier to raise. No matter how poor one is, they will always be money for the funeral. However, during illness, without insurance, one can only hope for compassionate and financially endowed, siblings or children to foot the bill out of obligation. Fundraisers for hospital expenses are always poorly attended.

The late musician Achieng Abura talked about the frustration of organizing a fundraiser to airlift her son to the UK for specialized treatment. She needed 4 million. In an interview with Business Daily writer Jackson Biko, she talked about the pain of only 10 people showing up for the event. Subsequent fundraisers, where she lined up big musical acts like Suzanna Owiyo and Mak’ Adem performed dismally.

People did not show despite her celebrity and widely acknowledged good natured personality. Two months after that interview, she would die at the Kenyatta National hospital where she was undergoing treatment for depression. The outpouring of grief was immense and in the funeral fundraiser that followed, donations were generous.

This is the recurring story of ordinary Kenyans struggling with illness. Anyone trying to raise money for an ailing family member in hospital will be met by the same stony silence. Yet as soon as the health afflicted individual succumbs to death, the same people who appeared aloof, all throw in a contribution. Somehow, when it comes to death, everyone has the ability to find ‘something small’ to share.

Sickness had become the biggest contribution of personal bankruptcy and we avoid the sick like a contagious plague. Perhaps we have run out of compassion. Maybe because a funeral is a one-time contribution. But illness can recur and people are weary of carrying the emotional and financial burden of nursing another back to health.

This is the very sad consequence of a country with a segregated healthcare system and a privilege that only a small fraction of Kenyans can afford. The nation is sick and people are so afraid of falling ill, they would rather die, because when symptoms persist, Kenyans start planning for a funeral.

2 thoughts on “When Symptoms Persist, Plan For A Funeral”