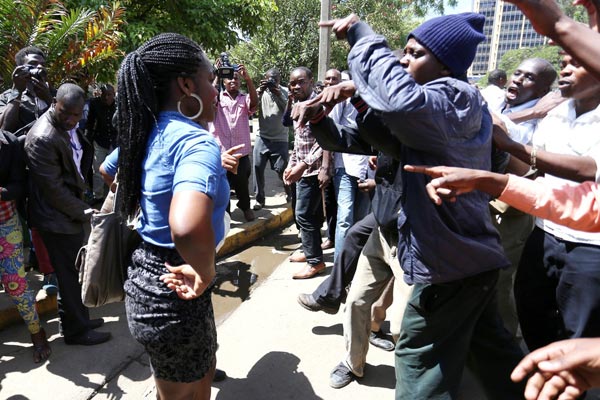 It is hard being a victim in Kenya. People are wired to distrust the ‘victim’ tag and only the victims that shout loudest gets a second glance. Rallying justice for victims is a long shot and an exercise in extreme patience and tenacity. Therefore most Kenyans have learnt to take full responsibility for all the misfortune that they encounter. It is a coping mechanism when no one believes the victims’ side of the story.

Victim shaming is quite commonplace. It seems easier to assume the victim was bad and attracted their misfortune. We prefer to stigmatize the victim than acknowledge the suffering. Women in this country are particularly having it bad and men cannot just keep explaining the victim’s plight away.

A woman gets assaulted and stripped while dressed in jeans, in a public bus park, in broad day light in front of onlookers. The male reaction. “Sorry and I do not advocate women getting assaulted but some women should also learn to dress decently”. The victim was actually decently dressed and the said jeans were not even a tight fit. “Sorry that these touts are ill mannered but some people just like asking for trouble. What was she doing there in the first place?”  A group of concerned women call for a demonstration to protest the act of gender violence on an innocent citizen by a gang of unruly men. “Sorry that some men cannot control themselves but why haven’t they shown solitary with the women who undergo FGM and walked in the streets for them?” The turn out to the street protest is large and the issues get good press coverage. “The press is biased. Why don’t they highlight the plight of the women in Mathare?” The press did last month. “Well, I am not a classist but these are just rich idle moms looking for attention because they cannot find men to marry”. There were also men in the protest, many husbands, who joined in solitary with the issue. “I am not a tribalist but real men from my community would not walk over a skirt issue”. Social commentators say, the root causes point to the broken family unit and absentee fathers. “I am not saying men are not guilty but all these single mothers should also accept that they cannot teach boys how to be men”.

My basic analysis of male responses during #MyDressMyChoice demonstration is that a frightening large number of men in Kenya do not understand the gravity of sexual assault, rape or battery. Sex education should be introduced in school if for nothing else but to teach the meaning of consent and assault.

Masculinity is not a power trip. Mature men who know better, have to start mentoring youth in their spaces. Offering good advice and providing solid examples. These chest thumping gorillas masquerading as real men have to be put in check. To my younger brothers, forget all this real men bravado and start by being a decent guy. Showing compassion will not diminish your manliness. This whole idea that you are justified to adapt bad behaviour because others are behaving badly is rather warped. There is the right way and the wrong way. The right way is lonely but take it anyway. You will be the better for it.

#MYDressMYChoice is not about short skirts or threatened masculinity. It is about dignity and respect for women. Period. Sexual assault is simply unbridled hate and gender prejudice and it must be rejected by all right thinking men. When we hurt our women, we hurt ourselves.

13 thoughts on “Wanted! An Innocent Victim Whose Side Of The Story Can Be Trusted.”