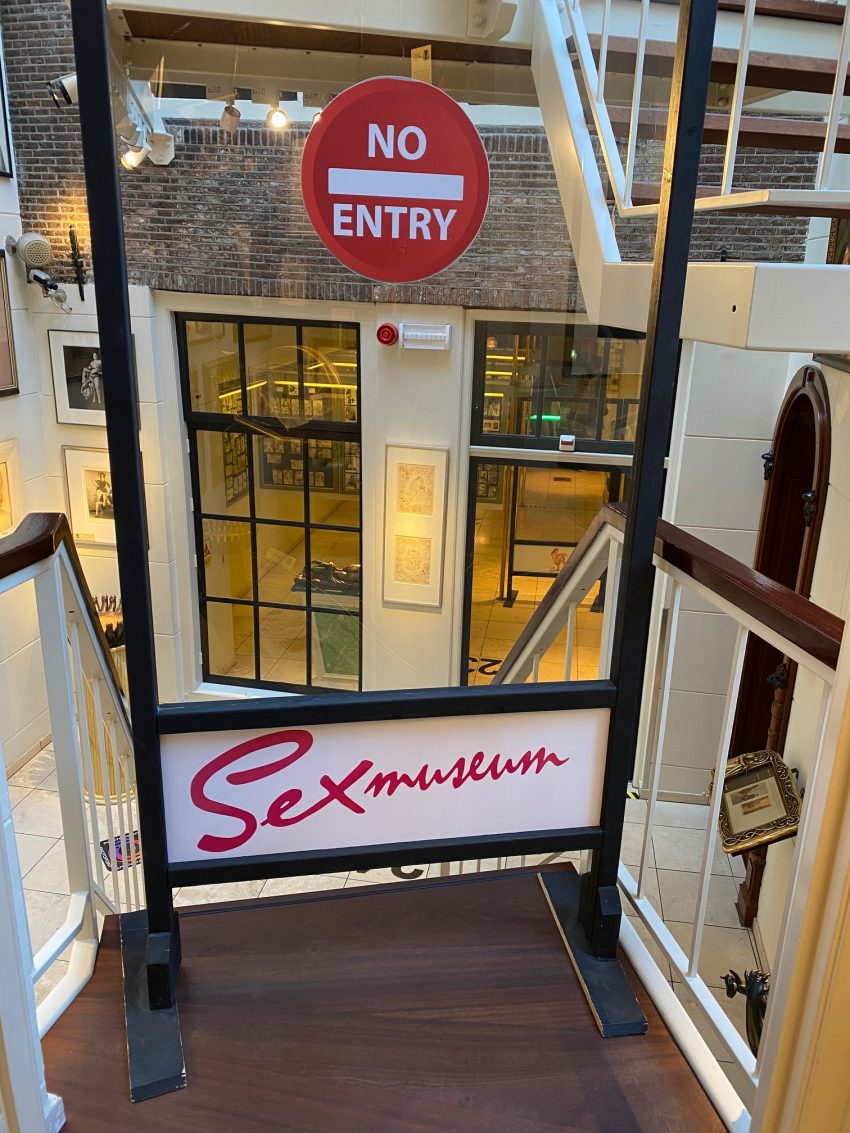 I visited the Sex Museum in Amsterdam.

It is positioned as the Venus temple and the world’s first and oldest sex museum. The museum is hard to miss. It is located on Damrak street, in the heart of Amsterdam about 100 metres from the Dam square, normally filled with tourists and pigeons and a 6 minute walk to the centre of the red light district. The Sex museum pops out like a flasher on a street  that is dominated by the mundane sight of supermarkets, tour operators, eateries souvenir and forex shops.

This is typical Amsterdam where sex work is decriminalised and has earned respectability as legitimate work.

During the regular Corona press conferences to announce new restrictions and regulations, sex workers enjoyed legal recognition. I watched the news with a mix of amazement and amusement as sex workers held their own in the recurring anti-lockdown protests and presented their counter proposals of how to handle their corona hygiene protocols. For most of 2021, one could visit a brothel, while museums and cultural theatres remained closed.

Despite this progressive face, the city of Amsterdam has been debating the uncertain future of a red light district that still draws in hordes of tourists eager to ogle and take selfies in front of the red curtains, where scantily-clad women stand behind the glass like flawless mannequins.

Even before the onset of the COVID-19 pandemic, Amsterdam’s mayor Femke Halsema had threatened drastic steps to curb the flow of European budget tourism by reforming the district to protect the sex workers from rambunctious visitors. Other radical propositions included moving the red light district to a different city and cracking down on cannabis cafes to dissuade tourists who turn into a public nuisance for residents.

Some changes have been made. The window brothels have reduced and other businesses have taken over. The city council has purchased buildings in an effort to slow down the visitors who had before the COVID-19 pandemic overrun the oldest and one of the most beautiful parts of the Dutch capital.

The district is not all sleaze and if you happen to stray past it in the daytime, you find an idyllic Dutch urban neighbourhood.  Known as the De Wallen area, the red light district is a network of interconnected narrow streets that is also a residential area and there is an old church, the Oude Kerk in Dutch, right in the middle of it.

Smoothie bars are found next to sex shops. Strip clubs and condoms shops stand alongside indie art galleries and hairdressers. On the upper floors, you sight residents doing ordinary things like airing duvets out of their windows or tending to potted plants on narrow balconies.

Historically, the proximity to the docks has made the Wallen district home to prostitution for centuries and in an interesting plot twist, the city trying to protect the sex workers and its reputation from the avalanche of low budget tourism. There is the issue of human trafficking and drug running underlining this concern and the city appears to be leaning towards the comforts of its wealthier residents.

The spread of gentrification marches on in Amsterdam and I am sure in the next 10 years, the Red Light District will be barely recognisable.

On this wintry morning, I walked into the Sex museum unsure of what to expect. I stepped on the red carpet leading to the ticket booth to meet the friendly older face of the man behind the glass barrier. He was lean and wore a white shirt and black trousers and could have easily passed for a bus driver. He scanned my ticket and asked for my Corona pass which is a compulsory requirement for access to all public venues in the Netherlands, after which he warmly ushered me in.

I read that this is one of the busiest museums in Amsterdam but I appeared to be the only visitor at midday.

A few steps in and I heard whistling. Out of a narrow brick wall alleyway, a wax figure of a middle aged European male with long sideburns and a bushy moustache mechanically emerged. He wore a floppy hat, a shirt and tie underneath a tan trench coat and before I could register his presence, the coat was flung open, bearing all his naked glory and then he retreated as abruptly as he emerged, back into the dark alleyway.

I had just been flashed by a wax figure.

Phalluses of all sizes call your attention throughout the museum.

The museum houses Amsterdam’s long prostitution tradition, tracing its evolution and influences, from a repressed sexual culture in the middle ages in Europe to the sexual revolution of the 60s. There is a section dedicated to eroticism and the allure of the East.

I hate to admit it but the museum felt like a walk down memory lane, at least for the 20th century part of the collection and this is coming from a kid who grew up sheltered in Nairobi in the 80s. My sexual education, long before I knew better was drawn from these popularised images of Western sexual debauchery.

The one item that got my mind racing was a movie poster from the 70s that I came across, titled the Sex World with the following log line,

“Welcome to the future…where every fantasy can be yours – for the taking”.

I marveled at the power of imagination.

While in my teens, VHS pornographic videos influenced our sexual culture. It is now algorithms that normalise and drive sexual trends. Our very ideas of sex are algorithm generated and fed back to us as manifestation of our deepest desires.  The sexual future of children is getting designed by artificial intelligence and it is sex that will be unattainable and unrealistic.

How on earth does a young person learn to rise above this miseducation towards transformational intimacy and healthy sexual awareness of self that informs relationship with others?

Racial sex archetypes have a long and dark history but young black men still aspire to images of hypersexual and hyper masculine body types as the epitome of desirability.

We have internalised a pursuit of the orgasm and are divorced from our very essence.  The capitalistic sexual model that rules the world is white and male and we have inherited the desires of others.

Thus, throughout adulthood, the sex lives of African men are governed by imitation, constraints, fear and guilt. Dating coaches occupy the vacuum created by the discontent and loss of connection to their true sexual selves. On social media, we read the stories of hurt and witness contests for power.

Our sex lives have to return to a place of wholeness and balance and it starts with an examination of the roots of our individual dysfunction. Sex is pleasure but it is also energy. Its value as a life force has to be rediscovered and rituals found that return us to its sacredness.

Nana Darkoa Sekyiamah, author of, The Sex Lives of African Women (2019), blazes a trail with the curated stories of African women defining new norms and narratives of lived sexual experiences across cultures and geography.

We have been paying attention to the stories of other cultures for too long.

The audacious task ahead is to challenge these practices that we have accepted as universal norms, as we build a new body of knowledge that might save the next generation from skipping down this predetermined pornified path, like lambs to slaughter.