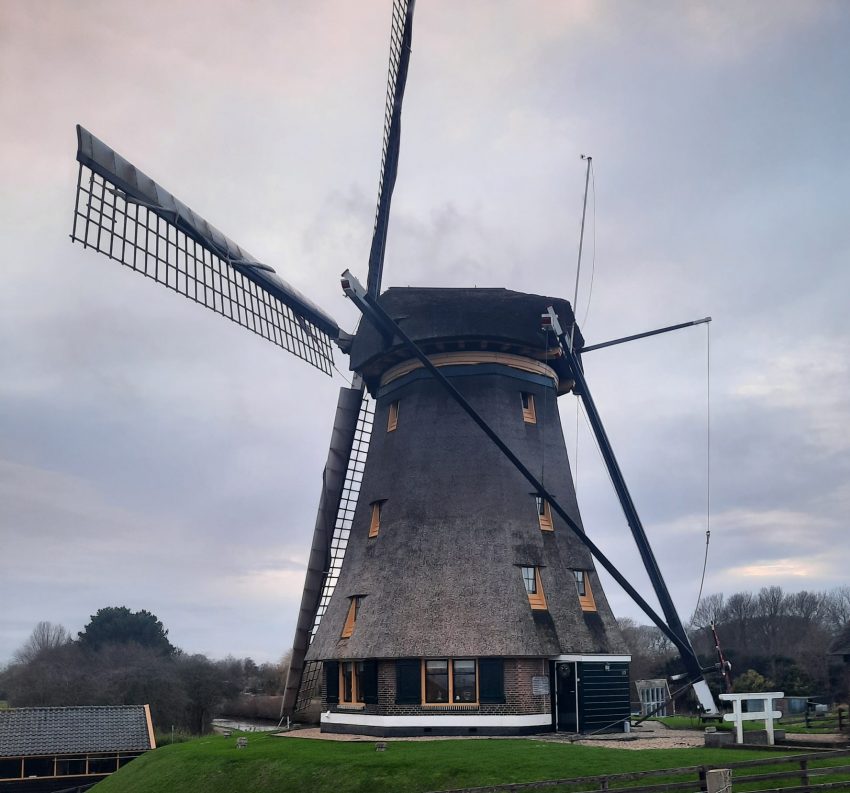 It is the last days of 2021, and instead of thinking of New Year resolutions, I am more concerned about when they will open up this country, so that I can resume doing normal things like having a haircut.

I check the time. My watch glows in the dim light and it reads only quarter to five. The darkness is descending fast on this moderately cold winter evening in late December. I walk towards a wooden canteen, decorated in glittering Christmas lighting, situated at one of the entrances to the Amsterdamse Bos forest. It sits adjacent to a car park, under a cluster of tall bare trees. Across the road, lies a hockey stadium with its flood lights partially illuminating the bright green artificial playing turf.

The Netherlands is a hockey loving country and they are the most successful team in World Cup History of the sport. I hear the banging of hard rubber balls against the woodwork, the clash of hockey sticks and the chatter of the players responding to instructions from a coach. A metal fence shields my view from what strikes me as a parallel universe, where a sense of normal still resides.

I come to this canteen for warm mulled wine, known here as glühwein. Spiced wine, served in a paper cup with spices floating in it, to warm my insides on a cold evening outdoors in the winter. The canteen owner says he is about to close up and I am his last customer.

“We have to close at 5pm, it’s the law! These buggers. They could let us open until 7pm but they don’t care”.

He has his back to me as he talks, stirring the pot, scooping and pouring the contents back in again. The man with a portly frame strikes me as a stickler to routine. He is not happy about the public restrictions and the Dutch lockdown in general. The frustration in his voice is clear. His state of normalcy has been disrupted.

I empathise, nod along, making the most of the few minutes of human interaction with this stranger and then we both wish each other a better New Year as we part. I walk off gingerly, sipping my wine.

I discovered this canteen with a Zimbabwean friend during the first Christmas under lockdown in late 2020. That year, a nation wide lockdown was a shock to the system.

The world came to a grinding halt and froze. The BBC news service estimated that nearly 100 countries worldwide went into full or partial lockdown.

I feel somewhat like a lockdown survivor and I try not to make too light of other people’s realities just because I often feel inconvenienced and restrained like a well fed giraffe in a European zoo. Though the COVID-19 pandemic was universal, its experience is very country-specific.

The first Kenyan lockdown was hard and the police turned rogue in the guise of keeping public order. In the early days, there were more deaths due to police brutality than the actual virus. Those statistics are a distant memory because so much has transpired in 2021 and my mind seems to have blacked out significant events.

I can barely recall the inauguration of Joe Biden as the new American president or the collective sigh of relief that brought the Donald Trump chapter of recklessness to an end, climaxing in the storming of the United States Capitol in Washington D.C. by a pro-Trump mob.

The festive holiday messages from family and friends in different parts of the world show stark contrast. Those in the cold Northern hemisphere share stories of subdued and quiet family gatherings. Those in the sun soaked tropics share videos of exuberant party atmospheres.

I receive pictures and videos of a Christmas street bash in Kisumu, a city that has its back to lake Victoria, showing some promise of establishing a bonafide carnival culture. I feel a tinge of envy and send out a congratulatory message to a friend who works for the County government in Kisumu. She replies with a note of caution.

To be fearful of large gatherings is the new normal. Social distancing is the term, when we really mean, physical distancing. We have learned to instinctively keep our distance, 1.5 meters and I have to remind my child not to shake hands with strangers because that is unhealthy.

I think about the increasingly large and agitated crowds protesting against the lockdown restrictions and public health guidelines in Amsterdam. Many times, they run up against the aggressive police, beating them down with batons, chasing them off the public square on horseback or blasting them back in line with a water cannon.

A Dutch friend says he has never seen a public this angry, not since the squatter riots in Amsterdam in the 80s. The vocal protestors on the receiving end of the police batons do not elicit immediate sympathy from a public that is losing patience for unvaccinated citizens who refuse to follow the rules. On social media, they carry the label of football hooligans, religious fanatics, conspiracy theorists, the uneducated plebs slowing down an end to the lockdown and a return to normal life for the rest of society.

Lockdown used to be a word we would associate with a movie genre, something that involved a prison break, starring a bankable star like  Sylvester Stallone. Lockdown is the anticipated state  of affairs after the discovery of every new COVID variant.

The country’s leadership recently made another grave announcement after the discovery of the Omicron variant.  Business owners who had barely recovered from the previous lockdown, had to shut down again, grudgingly. Public places emptied out and citizens retreated to their homes to obediently isolate themselves. To be outgoing and social is risky behaviour and often constitutes breaking the law.

As a father with two children, one of them born smack in the middle of a pandemic, this kind of living is normal. All my kids have known is a world that is masked and sanitised. Social isolation is their reality.

During some Zoom calls with parenting colleagues, I see their children bouncing off walls or zoned out in front of a screen.  The mentally fatigued parents, working from home, default to self effacing humour to hide the loss of control and tune out the distressed child seeking a parent’s attention.

My little girl has taken to mimicking mask wearing, in the manner of a style model trying different poses. A few times, she has handed me a mask, as if reminding me not to forget this essential accessory as I step out of the house. We have become accustomed to masks, we treat them as a compulsory fashion item, permanently tucked in jacket pockets and stocked up at home, to maintain a steady supply. You spot them, strapped behind our ears and lodged under our noses. When we become forgetful, or feel safe, they slip under the chin.

The streets are littered with used masks. We know they are an essential preventive measure that covers our mouths and noses to prevent us  from spreading a disease but they also expose our fears and vulnerabilities. If you look more keenly, at the faces in the supermarket queue, you can read anxiety in our eyes. With half our faces covered, most of the time, the eyes truly become windows to the soul.

The Dutch have a saying, “Doe normaal” which translates to, “ just be normal”. The phrase is used when someone crosses the invisible line of acceptable Dutch social behaviour, which could mean you are either acting weird or simply too foreign for the sensibilities of the locals.

During the first lockdown, I was surprised to see people in the Netherlands rushing to supermarkets to hoard toilet paper. I wondered if this was a normal reaction, then I read an essay by South African writer Sisonke Msimang, who explained that…

This emphasis on normality is a sign of privilege and it seems in 2021, the endowed West forgot to check its privilege. This was the year that the privileged rich countries, dropped the pretence of a unified global fight against the pandemic with controversy surrounding vaccine apartheid, travel bans and mainstream press articles depicting Africans as designated diseased bodies. It was literally every country for itself and God save the rest.

SARS-CoV-2, the virus that causes COVID-19 has irreversibly affected the social habits of our societies and our future is going to be defined by it, in the same way HIV/AIDS and the Global War on Terrorism reordered our world.

I guess, the great takeaway for me is this…2021 was the year the pandemic was supposed to ease up and we anticipated a return to normal with the promise of vaccination. COVID-19 had other ideas.

In essence, 2021 became the year our normal turned abnormal and the abnormal began to feel normal.

So, we call it the new normal even when there is nothing normal about it.

Happy New Year 2022, to my dear readers, thank you for your time and your words of  encouragement. Looking forward to your company this year.

May you continue to live your best lives.

And don’t forget to subscribe to receive the weekly column.

8 thoughts on “The New Normal”