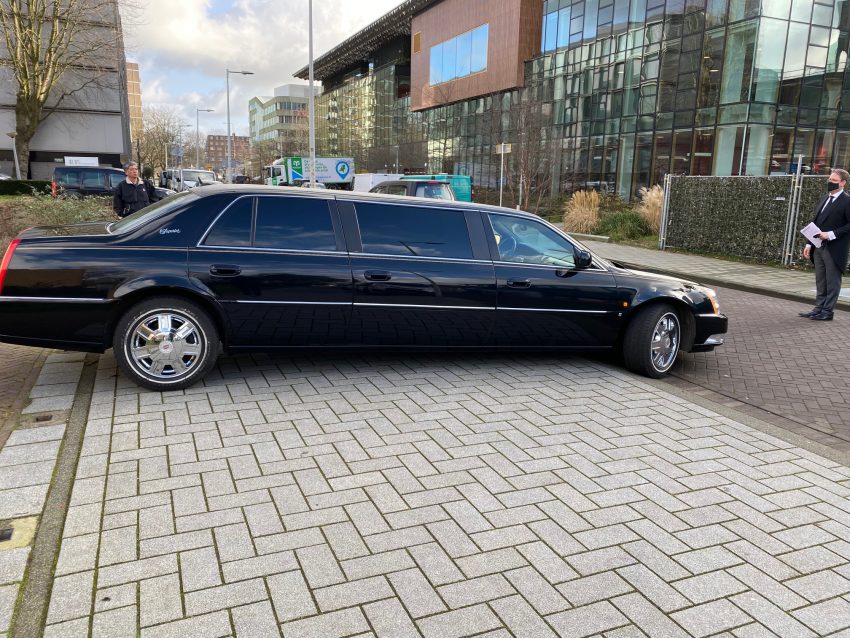 It seems to me that ambulances are always racing across Amsterdam. I have noticed that I no longer turn towards the direction of the blaring sirens of the yellow ambulances with a blue band running across the middle.  Perhaps, I have become like the Amsterdammers, I see around me who have tuned out to all the noises and bustle of a city much like I did in the past, to raucous matatus on Nairobi roads. I worry that I might have changed too soon, too quickly and a recent sighting stirred up these thoughts.

A few days ago, I saw a funeral procession and stopped to stare.

I had gone to pick up my little girl on a playdate in a neighbourhood in Amsterdam South near the Metro station and since I arrived early, I decided to do some sightseeing. On my way back, I heard a church bell tolling in a building that I had not recognised as a church the first time I walked past it. I caught the funeral party leaving the church and sliding the coffin into the back of a long black and elegant hearse.

It was a gut feeling that forced me to stand still and pay my last respects to a stranger on their final journey on earth. I had no idea whom the bells tolled for. Everyone else seemed to be going about their business. The cyclists peddled with urgency and purposefulness of people who have a destination to get to and the pedestrians, with their ears plugged with headphones hardly looked sideways to acknowledge the solemnity of the moment.

There were four men, exquisitely dressed in black coattail suits who bowed uniformly as soon as the coffin was placed in the hearse. I then watched one of the men direct the family members to another black limousine, holding the door open as the family members disappeared into the tinted interior of the limo.

The funeral guests, six in total, I counted, walked into their vehicles and I watched as the tallest of the suited men directed traffic to allow the procession to join the road. After this, the last of the men in the coat tail suits entered the hearse and they drove smoothly out of sight. All through this, the church bell kept tolling.

I would find out later, when I looked it up, that the funeral bell, as it is correctly called, is a European custom that announces the death of a person and serves as a reminder of one’s mortality.

This was only the second time I was spotting a funeral procession in Amsterdam in two years. The first was at the height of the COVID-19 lockdown in 2020. I was staring out of the window at the back of  the house I live in when I spotted a funeral procession snaking slowly on a narrow winding road where bicycles have right of way. At the time, I had thought funeral processions would be a regular occurrence in the Netherlands.

I haven’t attended a funeral in two years and I find that troubling. In Kenya, funerals are a regular affair and a  reality of life but now that I live away from home and with perennial inconvenience of COVID19 travel protocols, I have gotten accustomed to attending funerals remotely on Zoom and watching Facebook live feeds of ceremonies.

Every other month, I run into a death announcement in the numerous Whatsapp groups that I am part of and send a contribution towards the funeral expenses in an act of solidarity. I find that it is important that my name appears in the contributors list so that I am never accused of having forgotten our ways, so soon.

On the annual trip back home, I make time to do the rounds to stand at the graves of the departed because no one ever turns away a mourner who has come to pay their last respects no matter how much time has elapsed since the burial.

But in the Netherlands and even in the midst of the COVID-19 death toll, I have hardly seen any funeral processions and so I am still to be acquainted with the burial customs of the lowlands. Yet, burial sites surround me. I have visited several public cemeteries in the fashion of a tourist, to see how the dead are remembered here.

In the beginning l was unable to recognize these cemeteries as they appeared to be private gardens with rock sculptures and park benches and all I seemed to notice was serenity and the sense of privacy they evoked. For many months, I passed by this particular cemetery that is located on the road to the shopping centre mistaking it for a private garden.

One sunny day, I noticed an open gate and behind stood lush flowering plants, park benches and white chipped stone paths. Two old women, with white hair, the taller one giving a plump elderly woman a hand and holding a bunch of flowers in the other hand, were inching towards a tombstone and suddenly as if a mirage had cleared, I saw the distinct weathered grey of tombstones all over the space.

From then on, l could not stop seeing them and there are well maintained grave yards all over the city lying quietly among the trees. The paths are always paved and the tombstones customised, from grand marble stone engravings to simple understated ones.

The Netherlands is a country about the size of Garissa county in Kenya with a population of 17 million people. Space is premium and in some places graves are rented and can be reused after a 10 to 20 year lease and the remains are cleared after the time expires. There are online cemetery sites where you can rent a grave in one of the listed graveyards. In the church compounds, I noticed the graves were much older, some dating back to the beginning of the 19th Century.

In this country, where graveyards are diligently preserved and are readily accessible as public spaces, the funeral remains a private ceremony.

When I was younger, all that funerals stood for was anguish and financial distress.  The worst traits of a family were aired out like dirty linen and the whole affair was always outrageously expensive.  There is an ugly side to the commercialisation of the death ceremony and I have seen family members descend into pettiness or selfish behaviour.

Some funerals break families and others leave them stronger. Family members reinforce their bonds, true friends reveal themselves and the funeral becomes a measure of the value of the departed lived experience. The closing act of the theatre of our lives, plays out at the funeral.

I think of the funerals l have missed. Not so much for the loss of the departed, as sad as that is but the loss of community and sharing of grief. We parade and prance during weddings. At funerals we are our true selves and allow our vulnerability to show. It is one of the few spaces you will find African men crying openly.

My grieving is now more material. I send monetary donations and I regret not being able to be present for family and friends during a funeral. When we weigh our relationships purely as a transactional arrangement, we build them on shaky ground. As someone who has buried many loved ones, there is nothing more reassuring than being surrounded by a band of friends and relatives whose sole priority is to ease your burden and give you the space to be emotionally wrecked by grief without judgment.

I wonder how this loss of community affects those living overseas, away from the solidarity of the tribe. What does it do to their children’s grasp of reality, when death is never confronted as an inevitable reality of life? How do those children relate to a clan of strangers that emerges after the death to claim the body of ”one of their own” and conduct the funeral?

We are a society that is weary of funerals. They have become an ordeal for the family because they are now modeled after weddings. We are seduced by the efficiency of cremation mainly as a kind gesture to spare the family the logistical expenses and squabbling typical at funerals. Modernity has caught up with us too and we are headed down the quiet road that leads to the private funeral. Relationships are fleeting and the individual comes before family.

Funerals in our cultures are the last surviving social bonding ceremony where one still doesn’t require an invitation to attend. They help us arrive at closure sooner while providing a circle of shoulders to lean on in a time of deep grief. The next generation might not inherit these positive traits that I reminisce about and perhaps think it pragmatic to let go of all the fuss and in the process, as we tend to say in Kenya…

Throw out the baby with the bathwater.

During the Nelson Mandela lecture in Amsterdam this February, the keynote speaker, Kenyan novelist and public intellectual Yvonne Adhiambo Owuor challenged the audience to imagine themselves as protagonists of the future even as we mourn the pain, loss and suffering of our past lives. Reflecting on the  life of Madiba, she noted…

Our rage, pain, sorrow, suffering, trauma and anger are valid, yet somehow, somehow we must carve a way to not only encounter the horror head-on, but to also transform it into strength and meaning for us and our children.

3 thoughts on “The Funeral”