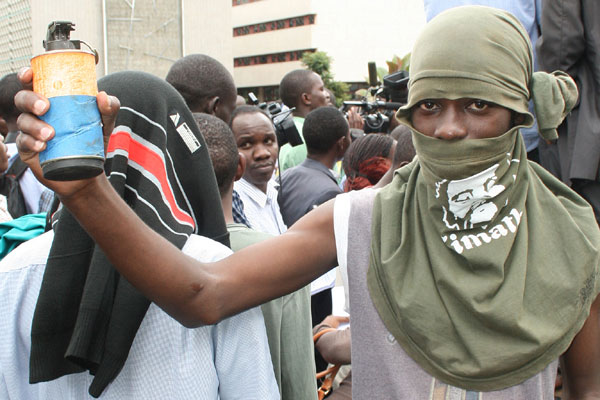 The text messages started flying out early by 8’o clock in the morning. The retweets came fast and Facebook cautions were shared. Avoid the area around the University of Nairobi.  Traffic started building up on the alternative routes. Taxi drivers were taking the long way round. There was going to be a peaceful demonstration that involved university students and it is always best to leave them in peace. As expected an altercation happened between the peaceful demonstrators and the anti-riot police with innocent members of the public caught in the fray. The usual gangster elements exploiting the tyranny of their numbers, went about their business without a care in the world, robbing, stoning and harassing motorists. As they were trailed by journalists, all angling for the best headline shot. Meanwhile, the rest of the city simply adjusted to the inconvenience in that same begrudging manner you would have to a scheduled Kenya Power outage.

That evening, I tuned onto the radio, to get a grasp of what the student grievances over fees entailed. On air was the SONU leader Babu Owino and his sidekick for PR, some character going by name Serikal. I was optimistic, hoping for a reasoned debate around the justification of the right to protest. The radio talk show was a painful experience. An opportunity to articulate the students position was lost and as someone aptly put it, all we heard was ‘comrade this, comrade that’. Being a radical does not equate lack of reason.  Simply talking to provoke in the mistaken belief that it makes one a tough guy is one of those bad habits that is quite prevalent on talk radio.

Like the quality of most things in Kenya, student activism just isn’t what it was. Student leaders of the 70s, 80s and 90s were simply cut from a different piece of cloth and products of their time, ready to die for what they believed in. Students were known for taking a bold stand on national causes. There are several examples of how students have risen to change the course of history.  From Soweto to Serbia, Tahrir to Tiananmen Square protests, students were the vanguard, instigating social change. With a resigned sigh, we lament, “the youth of today”. That level of energy seems to be only good for twerking and swag.

At least we know where the blame squarely lies. We abdicated home schooling because, all the time available was spent earning a living. Government misplaced its priorities. Universities were turned into businesses. Meritocracy was sacrificed in pursuit of the elusive shilling.  Having good grades was not half as important as paying the fees. Lecturers were reduced to groveling over low pay. The quality of instruction plummeted and students got resourceful. The student union positions became self-aggrandizement vehicles. A bridge to the pampered club of the youth leaders and the holding station for the gravy train of elective politics.

The student leadership simply mirror mainstream politicians who we vote in for all the wrong reasons. They understand the power of hype and glib to get you noticed. There is never any accountability needed if you can find someone to blame. Meanwhile, a drained, law abiding and hardworking middle aged mother, on her way home gets pelted with stones as a soft target of misdirected aggression and it is not even considered a criminal act. We simply call it bad luck happening to good people.

FEAR OF THE PUBLIC APOLOGY

The public apology is not a Kenyan male habit. Corrupt individuals will rip off state corporations, clean out the coffers and get caught in the act. You might wrestle out a confession but a public apology will be nearly impossible to extract. That is tantamount to admitting liability and we are all innocent even when proven guilty. Given a chance, we will point out who is to blame. The resistance must stem from our past. The English came, stole land, occupied and exploited it and they never apologized to the original inhabitants they displaced. It took a court case, half a century later filed by Mau Mau veterans to get Britain’s acknowledgement of colonial era torture and land grabbing. Therefore, the reluctance for public officials to seek forgiveness for wrongdoing has precedence.

The same macho standard plays out in relationships. Behind closed doors, men are known to plead leniency for varied transgressions regularly. However, out in the public eye a different staunch is adopted. We are a society that lives by adage, ‘thou shall not wash their dirty linen in public’.  I may have messed up but darling, no need to humiliate.

Therefore, when a personal apology addressed to a wife appeared as a paid advert in one of the local dailies, it caused a sensation. Francis Onyiso probably went along with it thinking, no one reads the classified section.  Sadly, this is the 21st century and he became a news item. A man takes out an ad to apologize to his wife for some hurt he caused and the public demands details! Francis Onyiso is obviously setting a bad precedence. Now, if your wife insists on a public apology for some thoughtless act on your part, it won’t be thought of as malicious. After all, Onyiso did it and he is a public figure?