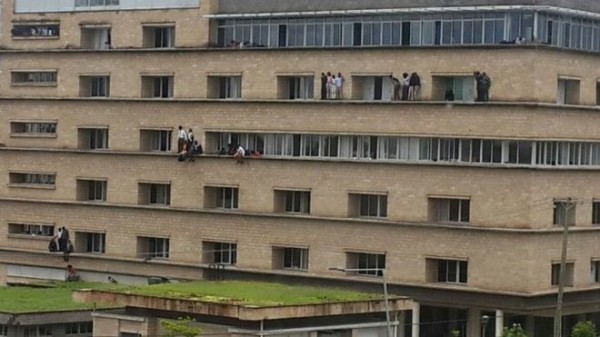 Prank skits on Kenyan TV have become a most annoying trend. They clutter your visual space and the slapstick is rarely funny. These skits initially invaded our mindscape as cheap downtime fillers and oddly Kenyans have become desensitized to the phenomenon. Pranksters left loose among the public can create disturbance in ways likely to increase and incite havoc. It is puzzling how pranking evolved nationally into an adult activity. Most grown folk typically stop pranking by teenage.

Sadly these days, making a fool of innocent people on camera qualifies as a legit TV content. People have forgotten how to crack a good joke and prank shows basically encourage laughter at things mediocre or humiliating. Cool Nairobi city people assailed with this grafted humour are expected to act restrained and tolerant. A measly apology plus the opportunity to play idiot on TV is all that it takes for them to play along and not punch the prankster in the face.

We are deluded by annoying strangers interrupting innocent folk, violating private space and publicly belittling people in broad daylight and trying to pass it off as FUNNY! Most of us prefer to be spontaneous and original with our laughter.

Maybe pranking works for irate Westerners who need major prodding to lighten up. Over here people do not appreciate disturbances from random strangers on any given sunny day. The reality in the so called ‘Developed’ world is that some producer can leave home daily and earn a decent living by scaring the shit out of strangers.

In our Kenyan reality, if you pull a prank carelessly, in the wrong part of town chances are you may lose a limb or your life. In my village, pranksters are quick runners who operate under the cover of darkness for good reason. The general public finds them a nuisance.

Nowadays too many people think their tired jokes are universally funny. This infiltration of ‘Knock! Knock! Who is there!’ level jokes is tedious. Being Kenyan is already an exhausting reality and the last thing anyone needs is an idler looking for a TV filler complicating their day.

These new generation of digital rebels scare easy. The most effective pranks evoke and involve fear. Adorn a creepy mask, black cloak and jump out a bush in Uhuru Park, playing Satan and you would be surprised at the number of adults scampering for their lives. Whatever happened to the sensibility of shags where people faced by the unknown took a second look before panicking? Clearly years of sustained indoctrination has left a marked impression of what evil is supposed to look like. Culturally we collectively learn what to fear from perceived experience much of which is exclusively imaginary.

When the “imaginary” disguised as a drill causes loss of innocent lives, this amounts to taking a game too far! In view of the unstable terrorist climate, this newly learned fear of terrorism has to be countered intelligently.

Recent terror related incidents locally have shown a glaring lack of safety drills. As such, priority should be placed on enforcing clear and real evacuation procedures for regular citizens. Students in particular should be taught to distinguish between a drill and an actual emergency. To avoid stampedes, exits or emergency exit options ought to be taught as mandatory studies.

When an institution of repute such as Strathmore College passes off a prank as a drill using live ammo with tragic consequences, it is wrong. Perpetuating terror based caricatured stereotypes in a learning Institution is careless.

The Strathmore “terror drill” incident, highlights enacted official ignorance of epic proportions. Why would anyone sanction a make-believe terrorist attack in view of our recent trauma? Why continue pushing the panic buttons and heighten animosity among innocent people? When will we learn to understand we are multi ethnic and stop the internal profiling?

The threat of susceptibility is existent and in the face of death, normal people run for their lives. As it is, the country’s youth are traumatized and depressed. The children are crying yet we tell them, “not to worry. It is just a drill”.

The recurring mass episodes of random and unchecked savagery means that people need to be taught how to mentally cope and survive under duress.

If a make-believe fantasy world as seen on TV and the internet defines our daily reality, how will actual terror events affect our collective reality as Kenyans?