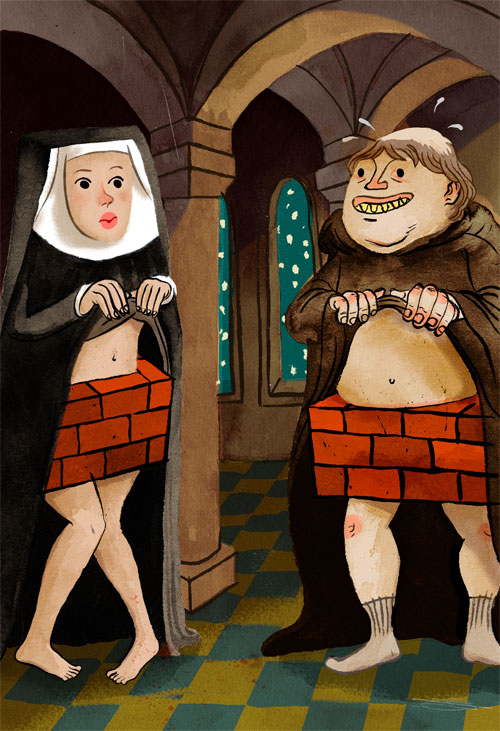 News reports of priests accused of abusing young boys in parishes, notably in the US and Ireland  brewed up such a stink that as some say, ex-Pope Benedict resigned. For years jokes were made about randy priests but for evidence to exist of actual ingrained transgression was tragic.

The church is usually the last moral frontier and when it fails to hold up, it leaves a thoroughly demoralizing situation. The pedophilia scandal is a blow to genuine priests upholding their vows, now tainted by the reinforced stereotype.

It is easy to single out the Catholic Church because of its strong stance against abortion, condoms and homosexuality. Pedophilia apologists will reach for statistics to prove that rampant cases occur in other religious cults, homes, sports institutions and schools. While this is true, it is expected that sexual transgressions among ‘holy fathers’ would be lower compared to the average decadent society.

Celibacy in the church has always been a contentious subject.  We have heard about married clergy coming out to challenge the stance. They never got that far. The argument forwarded is that celibacy is unnatural and therefore doomed for failure. There is some truth to that. When a divinely inspired priest falls so short of goals, what chance does the average Joe aiming for an asexual lifestyle without straying into sexual deviancy or hypocritical denial have?

Sexual diversity exists and not everyone gets off on the same stimulation. It is also a learned skill and unless addition tutorials are added, fumbling becomes the norm. However, religious taboos and morality rules, state of health, society’s nosy neighbours has made sex outside marriage a near treasonable act. The pressure to conform to corrective behaviour has led to a long list of involuntary celibates.

Otherwise normal guys who would like to get some often but due to circumstances beyond their control, fear of disease, work, time, low sex drives, self esteem never get around to it. Some women, typically jaded and faded have always been quick to validate celibacy ( I can do without sex) and usually at the end of the argument, lies an abusive man at fault. Older birds, those post menopausal women routinely shut out urges without much fuss. The action results in the release a legion of dirty old men like bats fleeing a burning building seeking compensation outdoors for lost conjugal rights.

Men on the other hand have never been quite as successful in controlling the rampant sex drive even in the pursuit of spiritual enlightenment. Even in cases where men refrain, it is more out of practicing involuntary celibacy than choice. Is it therefore possible for a single unmarried man to develop a healthy attitude towards celibacy when marriage is not a priority?

First off, it is not easy nor is it for the fainthearted. We cannot even get around the concept of monogamy, so celibacy can a bit of a tall order beyond spiritual motivation. With sex stimulation crawling out of every corner, the fuel for repressive behaviour never runs short.  But despite the derogatory labels of intimacy issues, wimpy or closeted behaviour, they are actually some encouraging advantages to the practice of celibacy.

Celibacy as an alternative sexual lifestyle is about complete self-control that goes beyond taking a long, cold shower. Voluntary abstinence enhances a man’s independence and freedom.

It is a chance to channel latent sexual energy to cerebral forms of creative expression and find a place amongst celebrated ranks of genius like Beethoven and Leonardo Da Vinci.

Think about the long list of hot looking platonic girlfriends one can have. Beautiful women who never get to ask, “Where is this going?” Women who will cherish your individuality and sense of principle after you reply, “I refrain from tactile affection”. The advantages of celibacy guarantee a racket free existence with women.

No awkward moments shopping for condoms. No performance anxiety. No morning after drama. No, compulsory phone calls to reaffirm your commitment. No floppy syndrome. No counting days after a burst condom incident. No creeping around VCT centres. No fear of sexual related injuries and the relief of never having to ask, “ Was it good for you?”

Trying to control sexual expression has being an ongoing challenge since the beginning of organized society. Men won’t commit because they can get sex outside marriage. Women won’t oblige because imposed virginity has a higher premium before marriage. All these unhealthy labels around sexual fulfillment makes a strong case for self policing. The thing is not denial but rather accepting that we cannot be ruled by our cravings.

Celibacy has short-term benefits too as long as the inspiration is not drawn from the false premise of guilt. Temporary abstinence is exercised to great results among competing athletes, military and long distance couples.  Most men are aware of the exhausting after effects of even moderate engagement.  It is important to understand that we live in a world of contrasts and we have to dwell on the positive aspects that we want align our life to as opposed to keep up with the expectations of critics.

To practice abstinence through religious coercion in the face of internal contradictions only leads to repressive behaviour. The point is that celibacy is not bad. No one has ever died from lack of sex though it must be said that it has driven many people crazy.

10 thoughts on “Sorry Darling, I Am Celibate”