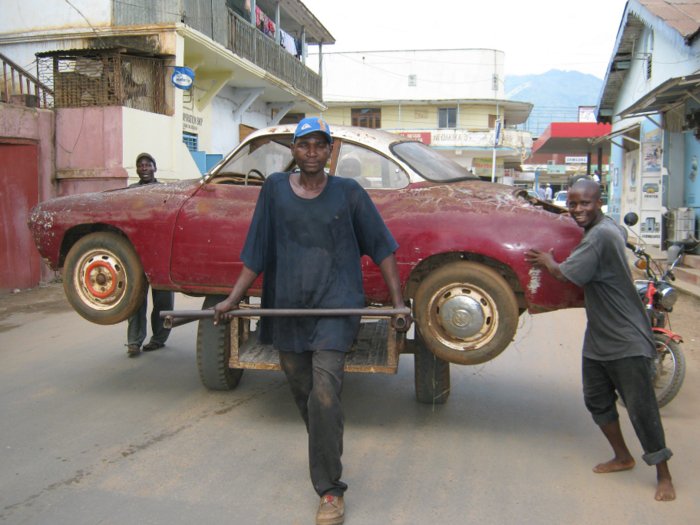 Are there a bunch of guys, who sit around a table playing cards, in a basement, knocking back shots thinking of new ways of fleecing Nairobians? Those same guys who thought jailing drivers for tinted windows was a pretty brilliant idea. If you thought Alcoblow was a pain, then your pressure is just about to shoot up. The Kenya traffic police in collaboration with NTSA (National Transport and Safety Authority) have begun enforcing a 50km/h rule on major roads within the city. Which simply means you will be flagged down and fined for driving at 55km/h in your Porsche Cayenne on a 3 lane highway such as Mombasa Road. The penalty is 10 000 kshs. If you exceed the speed limit by between 21 and 30 km/h the fines jumps to 20 000 kshs. Failure to raise the spot fine, warrants an arrest and free lodging at the nearest police cells. A court appearance will attract a fine of 30 000 kshs or 6 months imprisonment. You can drive as fast as you like on the back roads but please behave when the police are watching.

Most drivers in the city realize that they are sitting ducks. The downhill momentum alone on most highways will tip the speed gauge over 50 even with the gears disengaged. Therefore we know how this will play out. There will be a serious crackdown on errant drivers, which in this case is anyone driving at a modest 60km/h on a transnational highway and the traffic police will be deliberately obtuse as you watch speeding cyclists zoom past in dismay.

The flagging down will be selective because in this city, “you have to know people”. There is a class of individuals above this law. Law bidding citizens will end up causing traffic jams of epic proportions in an attempt to stay within the limit. Most drivers will be caught unawares because they will be no signage to inform one of the new limits. The ever resourceful Kenyans will form a twitter traffic monitoring group with regular updates to inform frustrated motorists of speed traps and hot spots. In a month or so, a standard ‘convenience’ bribe will be established in lieu of an official booking and all will be well again.

For a city that is grounding to halt and choking with vehicle traffic, the 50km/h speed limit is seriously ill conceived. In most parts of the modern world, driving too slow is actually considered dangerous. It is for that reason that minimum speed limits are posted on roads and highways. take the US.  In New York state, the fine for driving too slow is $195 ( 16 000 kshs) which is bigger penalty than a speeding ticket. In California, a driver holding back 5 or more vehicles on a 2-lane road is obligated to pull into designated turnout areas to prevent a jam. In the UK, they crackdown on slow drivers and even have ‘slow speed’ cameras to catch culprits.

If you have been forced to tail a slow driver on a 2-lane highway, one can understand how frustrating slow pokes are. The kind of drivers who rest their foot on the brake pedal, do not respond to flashing headlights and hold back rows of cars as they ride alongside a trailer. Fast drivers, contrary to what most people believe are safer drivers and tend to be more focused on the road. They rarely have cars tailing them and ease traffic congestion. Besides highways were created to cater for varying driving speeds. This new traffic act while masquerading as a road safety measure is merely another smart revenue collection stunt from our ever resourceful traffic police department.

2 thoughts on “Slowing Down The Rat Race.”