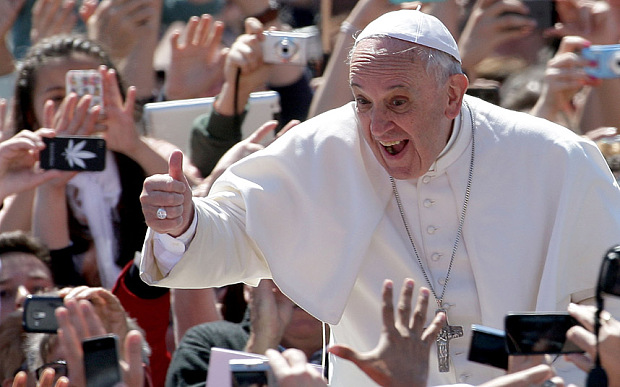 There is an old story. The Pope goes to America. He is met at the airport by a limousine that he longingly admires. Then he says to the driver, “I have always wanted to spin one of these. Can I take the wheel?” The driver is hesitant and tries dissuade the pontiff. It would not be appropriate. But the Pope is persuasive and the driver eventually relents.

The Pope takes the wheel and is instantly impressed by the surge of power. He squeezes the pedal and soon the limo is clocking a 100 mph in a 50 speed zone. A police man clocks them zooming past and gives chase before flagging down the limo down. He walks over to the driver’s side and asks him to lower his window. The sight of the pope startles him and he politely requests a moment. The traffic cop goes back to his car and radios his superior.
“Sir, I think we have a problem.” The Chief, “What sort of problem?” The cop replies, “I pulled over this guy for speeding but it is someone far too important?” The chief was puzzled. “More important than the mayor?” The cop insisted, “No, more important”. And the chief continued, “Well, important like a governor?” The cop shook his head: “Waaaayy more important than that”. The chief was getting vexed, “Like the president?” The cop held his ground, “Much more”. The chief was by now at his wits end. “Who could be more important than the president?” And the cop replied, “I wish I knew the answer but he has the Pope driving him about?”

I remembered this account as Pope Francis wowed America during his recent visit. The Argentine born Pope certainly struck me as the kind of man who would insist of driving himself. His personal story is one of a man who has been humbled by life and his leadership so far has been a demonstration of the power of humility.

The USA is a country known for feverish divergent religious positions but for the few days the Pope was visiting, America displayed its most pious face. The liberal press was practically swooning, filling pages with endless accounts of the Pope’s humility. The pope chose to make an entrance in tiny Fiat over a luxury limo and caught most onlookers by surprise. Hundreds of thousands of admirers lined the streets to catch a glimpse of the disarming smile of the Pope, through an open window in the back of a nondescript Fiat. Several times, the motorcade was stopped and babies were kissed, children comforted and America’s most vulnerable consoled. The pope hobnobbed with the homeless, the disabled and prisoners. His speech in Congress was powerful and poignant and it brought US Congress men to tears. Pope Francis even added his voice to global social injustice and reinforced his stand on environmental advocacy. He spoke out for immigrants, the oppressed classes, attacked consumerism, political grandeur and touched on the challenges within the church. It was a rigorous sermon in realism.

This explains why Pope Francis’ appeal cuts across faiths and age groups. His ability to avoid dogmatic religious proclamations, tone down the pomp of his office and level up with his audience resonates even with atheists. This is a Pope who believes, “It is not necessary to believe in God to be a good person”.

Not only does he practice what he preaches but he is also an astute observer in touch with realities of our time. Talking about young people, he cited practical examples, “In Buenos Aires, mothers say to me, ‘my son is 34 and he’s not getting married, I don’t know what to do.’ So I tell them, “don’t iron his shirts anymore.”

Spiritual leadership of the Pope Francis caliber can pass for fictional. I am reminded of a time in Kenya, when we did not have to look all the way to Rome, to find some sense of spiritual and moral leadership. The uprightness of church leadership as epitomized by the late Bishop Alexander Muge, Henry Okullu, Cardinal Maurice Otunga and the courage of Reverend Timothy Njoya is a lost chapter of Kenyan history.

The contemporary church lacks moral spine. I have lost count of the church wrangles over property or status that have become the norm in the news cycle. The church leadership is populated with charlatans and characters of such unsavory nature, you would want to throw their followers into a psych ward to have their heads examined. Church leadership is drunk with power and dedicated to kissing the boots of the overlords. They live to collect tithe, turn profit and unashamedly peddle guilt. We have arrived at this sorry state because religion became a conduit for power and power is dangerous without humility.

That Pope Francis is coming to Kenya in November is extremely timely. The country is in desperate need of a spiritual reboot. The church was designed to nourish the spiritually famished, speak for the voiceless and provide refuge for the forsaken. It lost its way.

6 thoughts on “Sending An SOS To Pope Francis”