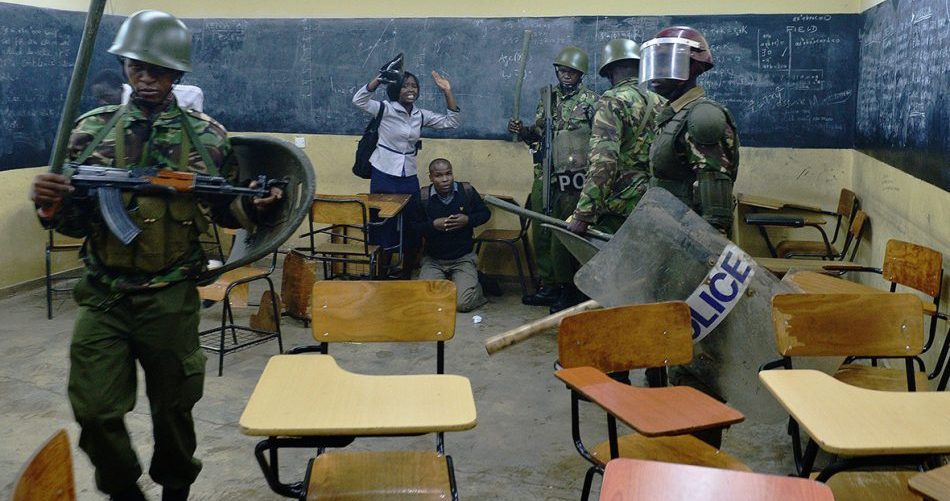 A number witness camera videos popped up online of University of Nairobi students getting “disciplined” by overzealous policemen following a riot to protest the arrest of Member of Parliament for Embakasi East, Babu Owino. Babu was a former University student leader and he still enjoys comrade goodwill. The anti riot police descended on the Nairobi campus on the day of the planned demonstration ready for battle. The students caught in the fracas met the full of wrath of prejudiced police men who have a long standing grudge with public university students.

More accounts have since been relayed of innocent students harassed, beaten and humiliated by policemen in battle gear. Students received a beating they did not deserve and with it a rude introduction to the occupational hazards of student life in a public university.

In a University protest, the real rioters are a slim minority, normally too savvy to be caught flat footed by the police. They engage in strike and hide games and remain one step ahead of pursuing policemen unfamiliar with the ins and outs of the Nairobi campus. The sad consequence of this strategy is that police resort to treating all students equally leading to many innocent bystanders caught unawares. They are mostly new students who heeded their parents advice to “concentrate on their studies” and were busy studying when harm came barreling through their front doors.

I was in the vicinity of the university of Nairobi having lunch when the teargas blasts rung out. In the restaurant, operating at full occupancy over lunch, easy bunter continued uninterrupted. No one seemed particularly disturbed by the commotion happening on University way a few metres away. I was assured by a mature 50 plus waiter that the situation would be contained fairly quickly. He had spent over two decades in the same work station and watched successive generations of students mellow. The generation of students in the 80s and 90s engaged the police in violent street battles at great personal risk to the public caught in between. Even riot police approached main campus with caution. Such scenes are rare today.

The police and the students have been involved in a duel of honor since University riots became a thing. As the story goes, uniformed police men, who lack the academic smarts to qualify for higher education relish a chance to teach uni students a lesson in respect. The students dismiss the police as uniformed thugs sanctioned by a repressive regime with little regard to civilian rights and the stage is set for a beautiful confrontation. The scenes witnessed at the university of Nairobi are a microcosm of the political state of affairs. Famous American gonzo journalist Hunter S. Thompson once said, “We cannot expect people to have respect for law and order until we teach respect to those we have entrusted to enforce those laws”.

In our highly charged political climate, the quest for respect drives the vitriolic rhetoric between the law makers and spins the news cycle. Last week it was Babu Owino with a disparaging remark about the Presidency that sparked protests in Jubilee city strongholds and culminated in his controversial arrest and release a few days later. Jubilee supporters demanded punishment for the brash MP for disrespecting the president. Babu supporters were quick to point out that the President was no paragon of respect and it was a simple case of receiving a dose of his own medicine. Before we had even gotten over the Babu episode, Nairobi Governor, Mike Sonko appeared in a video in an abusive rant in retaliation that was not safe for work. Both men, feeling righteous in anger, demanding respect for their hardline positions.

It is no longer strange that Kenya’s most popular politicians are some of the most fouled mouth. Babu Owino’s gadfly personality has been an asset to his political rise as have been vile language spouted by the likes of Moses Kuria. There is a growing demand for abusive language that stirs up passions in public rallies. Political campaigns are about scoring points and scathing abuse is the short route to national notoriety. Obscene politicians are the social media equivalent of a “nude” controversy sells like quail eggs.

Kenya has evolved into a country where the leaders demand respect but do little or nothing to earn that respect and then go around abusing anyone who points it out.

The respect is long gone in this relationship between leaders and the people they serve and all that remains is a deplorable state of bad manners.

3 thoughts on “Respect Is A Scarce Commodity”