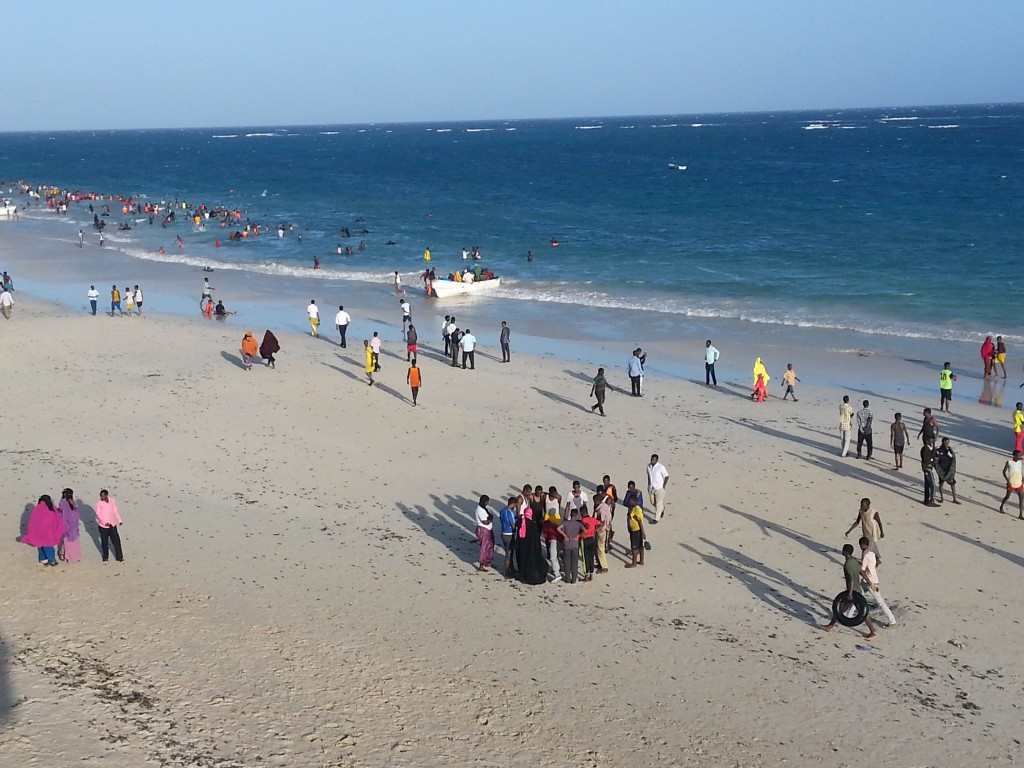 I was in Mogadishu, Somalia courtesy of a work assignment and everyone back in Kenya I told about it responded in predictable fashion. “Oh God! Jesus! Are you safe? Be careful”. Ever since the civil war in the 90s following the toppling of strong man Said Barre, Mogadishu has been synonymous with words such as disaster, war torn, lawless. Despite, the images from the American movie “Black Hawk Down” and every Al Shabaab atrocity I had witnessed on news reports, I remained cautiously optimistic.

We landed at the Aden Adde International, at about 11.30 after an uneventful flight. The airport is located right next to the sea front and it feels like landing on water. The airport lobby had a single overhead fan operating and it was fairly chaotic packed with agents, non-uniformed officials operating randomly and everyone speaks up. Old men wearing faded beige khaki uniforms in dark glasses, protruding bellies barked directions threatening to poke the disorderly with their ceremonial staffs. Past the visa booths, African Union (AU) soldiers, mainly Ugandans offered a sense of reassurance for the simple reason that they all spoke Kiswahili. The women were all covered up in hijabs and I would not see a single thread of female hair throughout my stay. Moments later our transportation arrived, a twin cabin Toyota Hilux. Five men hopped onto the back, all dressed in fatigues and AK 47s slung over their shoulders.

The men were of different heights and girth. Reminded me of an expatriate touch rugby squad in Arusha. The leader wore open sandals, had a scar right across his cheek and I noticed he had an injured eye visible through his shaded glasses. His belt was unfastened, held up by the straps on his combat shirt but weighed down by gun magazines, his belly unrestrained. Welcome to Mogadishu my host would say reassuringly, “Our sakuriti (security) good. They fight Al Shabaab many time.”

We arrive at the hotel to meet an imposing gate front by a thick metal barrier. At the sides were concrete metal barriers. The walls were high, easily 15ft. Not even our military barracks have walls that high. The adjacent wall had bullet holes. The watchmen all carried AKs and as we lowered our windows, they really checked you out. Between the airport and my hotel, I had seen more guns than I could count.

Security presence is a way of life in Mogadishu. Once you get over the presence of guns, the city life was reassuringly familiar though distinctly commercial rather than touristic as most East African coastal towns I know of.

It is easy to dwell on the negative stereotypes that we have come to associate with Somalia. Like in any other African city, if you go looking for them, you will find them. The city functions, if a steady internet connection and cable TV are your priorities. The main roads are well tarmacked and there is solar street lighting. Mostly importantly, it is safe in a most ironic way. 5 days in Mogadishu and I did not hear a single gunshot. No windows had burglar proofing and I never had to lock my hotel room once despite the fact that I left my laptop and valuables while out at work.  As one resident told me when I inquired about the security situation, “It depends on what you mean by security. In Nairobi, I would never leave my doors unlocked. Here we sleep outside peacefully”.

Mogadishu is certainly more than sum total of the stereotypes that trail it and rising while the ignorant mock it. There is an old Somali Proverb, “Get to know me before you reject me”.

If you are trying to quit drinking, I would highly recommend a trip to Mogadishu. The average temperatures in the early months of the year fluctuate between 27 and 30 degrees. That is bleeding hot and the kind of heat that calls for a cooling aid, also known as a cold and sweaty beer. In my part of the world, heat, beach front and cold beers are birds of a feather. But the drinking culture in Mogadishu, as I quickly learnt is Shariah complaint. Under the Somalia religious and civil laws, all kinds of alcohol are forbidden. Handling an illegal beverage will land you in trouble. It easy to dismiss the pronouncement because Somalia is no. 1 on Transparency International World corruption index. However, unlike familiar Nairobi where most laws, are made to be broken and the official line is rarely enforced, alcohol in Mogadishu is a mirage. You think you can find it or find someone who will take you to the source until you try. Not even the Mogadishu duty free at the airport stocks it. You won’t even find a non-alcoholic cider.

My beverage options were limited to coffee, soda, fruit juices and fresh water. Ever the resourceful Kenyan, I attempted to restore my recreation rights with the straight forward, “Where can I get a real drink in these parts to chase down the beautiful sunset after a long day in the hot sun?” I was told that drinking was frowned upon and socially inappropriate. Merely asking for alcohol was akin to asking your host to find you a cocaine dealer. It was a conversation that ended with a prompt decline. The only place where drinking is tolerated is within the heavily guarded UN complex and good luck getting security clearance.

One news report carried a story about two containers of wine seized by Mogadishu Port Authority. In my long writing career, this probably the first time I had seen the words wine and seized in the same sentence. The officials suspected that ‘foreigners and their local accomplices’ were behind the shipment.

The entire consignment was smashed by an earth mover in the sort of spectacle that can only be compared to former president Daniel Moi’s famous anti-poaching gesture, burning 12 tons of ivory back in 1989. It is a lot easier to hold an AK for souvenir snapshot than to go through the clandestine logistical nightmare that it takes to get hold of a cold beer. Don’t drink here.