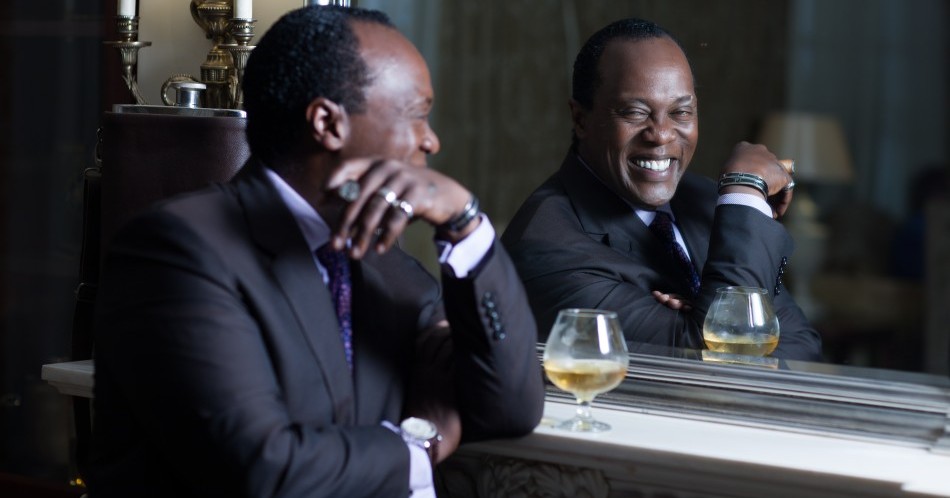 Jeff Koinange is without a doubt, Kenya’s most celebrated journalist. As host of the popular JKL show  on KTN TV his industry remains unmatched and his ability to find connection with all types of people has elevated Jeff to an undisputed position, as a voice of influence in our times.

The “Bench” a moniker for Jeff Koinange’s JKL show hosted by Kenya Television Network has become an institution warranting the title “the voice”. It is where talent is unearthed. It is where issues of contention get aired providing a weekly catharsis for dedicated viewers. The “Bench” helps us by constantly calibrating national events and contextualizing issues, thereby birthing a more informed audience.  The bench will clock 9 years in November 2016 and it has provided a platform to more than 3000 guests. This is what is considered good journalism.

But it what does it take to consistently operate at this high level? Does Jeff have a life outside the bench?

The BENCH was created out of sheer necessity…..or desperation if you will…..Depending on whom you ask. In 2007, K24 was a cash-strapped News Organization which was running on the most basic of budgets. I wanted to do a daily talk-show akin to Larry King Live or Hard-Talk. We didn’t have a studio per-se and renting one was out of the question.

I therefore decided to do something different, think outside the box, and came up with a ‘Park-Bench-type’ interview show. Two cameras, one Cameraman and myself as the host. It seemed comical at first….my lone cameraman, Eric, moving from camera to camera, adjusting the lens for a close up here and pulling back and ‘not missing’ my leaning back and forth or pointing at guests.

ALL KENYAN, ALL THE TIME

Viewers mused, even laughed at the concept. “It will never last”, I heard many say. “You’ll soon run out of guests,” Others opined, “His best days are over. He’ll never recover after CNN.”

Really?, I said. REALLY!!! That was my Challenge and for the first two years of ‘Capital Talk’, I refused to take a vacation.

We shot seven days a week, 365 days a year, two years running. The next three years we shot five days a week, different guests every day under what I called the ‘Theme of the week’. In a word, it was HELL. But it worked. The show caught-on, people talked about it the following day at the water fountain, it soon became a ‘Must-Watch’ Show.

Looking back, I don’t know how we did it, but we silenced every critic and wannabe critic and produced some of the most memorable shows in recent Kenyan History. And to cap it off, we were voted ‘Best Talk Show’ and ‘Best Talk Show Host’ TWICE at the annual Kalasha Film and Television Awards.

The BENCH continues to roll on, albeit now under a new name, ‘Jeff Koinange LIVE’ and a new station, KTN.  More than Two-Thousand Shows later and with that one constant…a BENCH on the set…..

Almost  three thousand Shows since and I’m just getting warmed-up……. 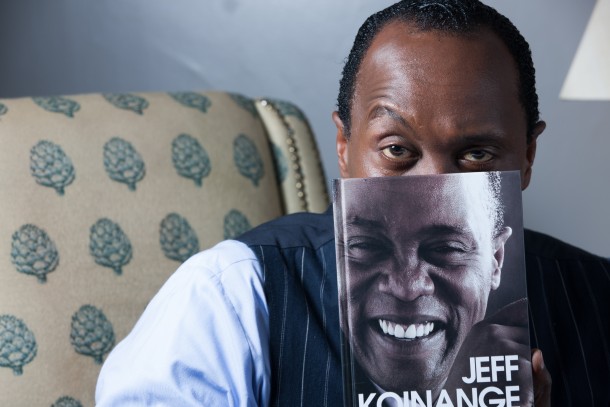 ON PENNING A BOOK:

Writing a book has personally been the second most satisfying accomplishment in my life. I say this because if I DIE today, one-hundred years from now, kids will be reading or hearing about Through My African Eyes.

I had written a Biography about my Grandfather, Senior Chief Koinange-Wa-Mbiyu; Mau Mau’s Misunderstood Leader a decade-and-a-half ago.

However putting my memoirs together and getting them published and reviewed, critiqued and appreciated was the best feeling ever. And I say this because it could have gone horribly wrong. Luckily I had a couple of great editors who had my back from Day-One and by the time we’d spent those countless sleepless nights and arduous days, we knew we had a ‘Winner’.

BUILD SOMETHING THAT OUTLIVES YOU

Ultimately I felt I would be selfish and greedy NOT to have shared my life experiences with those who, let’s face it, would never walk in my shoes (for better or worse). After all, how many Kenyans would say they’ve slept in refugee camps with fleeing displaced civilians, been shot at and almost killed by warring factions in war-torn countries, dined with War Lords and child soldiers in their jungle hide-outs, broken bread with Presidents and wannabe Presidents, and generally had a ‘Front-Row’ seat to History unfolding? Very few, I’d say.

That’s why it took me seven years to write “Through My African Eyes” and it’s been one amazing roller coaster ride. I tell anyone and everyone who will listen that I plan to sell a million copies.

Again they laugh and think it’s a bit of a stretch and that I’m being over-ambitious. They laughed before when I started The BENCH…..Look who’s laughing now!!!!

ON RAISING A MAN:

At his tender age, he is everything I am NOT. He is calm, composed, caring, diplomatic when he has to be, and an all-round gentleman. I have ZERO experience in raising kids…..and more so, I never had a ‘Daddy’ to raise me.

My father died the day I turned two-months old. But I’m learning every day to be a Father and a Daddy and a role model for this next generation of Kenya’s future. I often refer to him as “My Nigga” and he repeats the phrase with the confidence and zeal of a protégé…..as long as his mother is not around. If she happens to be in the room, he can only whisper the words out of respect. My wife often shakes her head in disagreement. But Jamal and I smile can only wink at each other in total and complete solidarity with the deeper sentiment implied.

Jamal knows his father is this ‘Famous’ TV guy. At school every kid knows of Jamal’s Dad. They always come running to me when I got to pick him up from school and say almost to a person, “Hi Jamal’s Dad”. I guess they talk about Jamal’s Dad in their respective homes.

I always remind Jamal that one day he’ll be more famous than his Dad and that he needs to remain humble and human. He doesn’t need reminding. He’s focused and ‘hungry’. He knows he has big shoes to fill especially after reading his Dad’s book and what he’s accomplished in his lifetime.

I love this kid. I wish I had more but I’m happy I have him. It took forever to get him and I can only be grateful and thankful to the Good Lord.

In my tradition, I gave birth to my ‘Father’ and since I never knew him, I can only try to visualize what he would have been like through his grandson.

It’s almost surreal sometimes. Watching this kid with my father’s name and hoping he’ll grow up to one day be a wonderful human being and a Great Kenyan. God has been good to my wife and I….and I THANK Him every day for giving us Jamal.

I’ve been collecting African Art for the past 22 years.

My first piece was done by the late Peter Kobia which I purchased while still a struggling journalist in New York City back in 1994. It’s a family of Elephants in the Tsavo National Park, kicking up dust and doing what Elephant families do. You can even see the ‘dust’ in the painting.

It amazed me how talented some people can be. How does one draw or paint ‘dust’? I decided then and there, that I would collect ONLY African Art which resonates with what I’ve always stood for.

Fortunately for me, my profession has taken me to 47 out of the 54 countries that make up Africa and I have been lucky to be able to find artists in most of these countries and buy a piece of theirs. From Ghana to Gambia…..from Senegal to Somalia……from Nigeria to Niger…….from Ethiopia to Eritrea…..from Congo to Cape Verde…….from Burkina Faso to Botswana…..from South Africa to South Sudan……I can confidently say my collection is unrivaled.

Friends come to my home and proclaim it a ‘Museum’. I just call it my ‘Sanctuary’, my place of peace and solace, my little piece of AFRICA.

In 2016, I turn a half-a-Century. To some, I come across as having accomplished a lifetime worth of achievements. To me, I’m just beginning. I feel I am a long way off from achieving my goals and ambitions. I feel that every day that dawns means I have an entire 24-hours to accomplish something.

I thank the Almighty for giving me the strength and the energy and the ability to go forth and do what I do BEST. Whatever the end-game is, I know that I am definitely on my way and that everything that has happened to me along this AMAZING journey has not been by accident but because it was meant to be and it’s guiding me to bigger and better things.

I always like to quote the ‘Desiderata’, words written more than three-hundred years ago by an writer anonymous, somewhere in the second verse it goes something like this…..

Enjoy your achievements as well as your plans. Keep interested in your own career.
However humble, it is a real possession to the changing fortunes of time.

Exercise caution in your business affairs for the world is full of trickery.
But let this not blind you to what virtue there is.

Many persons strive for high ideals…..and everywhere life is full of heroism.
Be yourself. Especially do not feign affection. Neither be cynical about love.
For in the face of all aridity and disenchantment, it is as perennial as the grass.

Take kindly to the counsel of the years, gracefully surrendering the things of youth.

Nurture, Strength of spirit to shield you in sudden misfortunes.

But do not distress yourself with imaginings. Many fears are born of fatigue and loneliness.

Beyond the lonesome discipline, Be Gentle with yourself.

You can keep up with Jeff …

3 thoughts on “OH My! What A Guy! The Many Facets of Being Jeff Koinange”