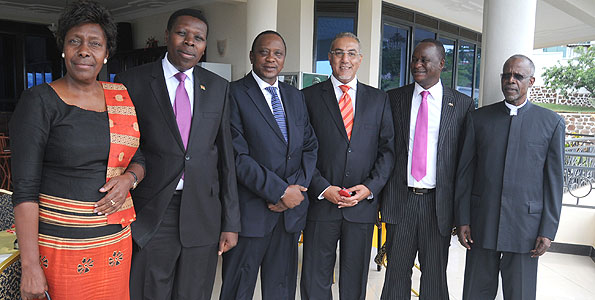 The presidential list of appointees to state parastatals generated a furore from the country’s youth. President Uhuru Kenyatta, the very epitome of youthful leadership appears to hold his elders in high regard. Richard Leakey was called out of retirement again. Of the 302 appointees to reduced number of 79 parastatals, the politicians stuck out on account of either their seniority or national insignificance.

But the uproar was a case of sour grapes. There was no possible way the list would have made everyone happy, the few hitches notwithstanding. Names that passed through without scrutiny. Julius Sunkuli comes to mind. In the end though, all the president’s men intended were appointments that reflected the face of Kenya, with all 47 counties represented. Which is not even feasible as good as it sounds but one must try to live up the constitutional imperatives. The clamour for more youth representation in the list of appointees was reactionary and a sign of growing ageism in our society. The youth have to learn patience.

In politics, the youth have their time and place. Those under 35 who think they can be board members just because they have degrees need to come down to earth. Yes, they are exceptions to the rule. Jaguar brings on hands-on experience as a board member of NACADA. However, parastatal board membership has never been about the hoi polloi. It is a reward system for the ruling class. It takes a lot of horsetrading to get elected and eventually someone has to pay back. There are no free lunches in this business.

Several Kenyans are caught in the illusion of a politically mature state, often drawing parallels to US Congressional politics. Those who engage in sustained and impassioned debates on social media about political accountability, the supremacy of constitution and the rule of democracy miss the point. In Kenyan leadership, as Nairobi senator Mike Sonko aka Sonko Rescue has shown, Keeping It Simple, is what wins elections.

It is really not that complicated. If you want to run an African state you have to be absolutely pragmatic and what is more pragmatic than recycling. We are lucky to have a 21st century, eco-friendly head of state who abides by the three Rs of conservation. Reduce, Reuse, Recycle. Many Kenyans are not past their ABC in recycling basics and are unable to see the inherent benefits of recycling.

It makes good economic and political sense to recycle. Kenya is no better than the USA, which despite its challenges with recycled politicians continues to forge on with probability of another Bush or Clinton as President no longer far-fetched. In politics, it is important to reduce one’s reliance on greenhorns. Enthusiasm, passion and patriotism will be buried by the corruption networks. PLO Lumumba ended his tenure bruised.

Experience is just something one cannot buy. However, it can be recycled. It takes 95% less energy to recycle a politician than it does to create, train and instil party loyalty in a new comer from scratch. The savings far outweigh the waste created by novices with no voter clout, who think their opinions matter.

A used politician can be recycled and brought back to life through a state appointment and look as good as new in as little as 60 days. Eugene Wamalwa’s broad smile is back in circulation. Rookies tend to get caught up in maintaining an image for public expectation. Besides, the cost of manufacturing new political appointees with experience to match is simply prohibitive. Recycling politicians saves much energy and time required to break in and corrupt novices. It would take at least 3 years to turn a perfectly honest Kenyan into a tender-preneur and a private developer. Men and women who can declare, bible in hand, their readiness to fight corruption in line with the dictates of Chapter Six of the Constitution without the slightest hint of irony.

The recycling of politicians comes with beneficial side effects of driving the youth towards entrepreneurship. Once the myth of government hand outs and youth entitlement is crushed, people are left with no recourse but to create jobs for themselves. That is how to establish a working culture among young people.

What is often forgotten by opinionated journalists, is that politics is one of the world’s most thankless occupations. On average, thousands of politicians, suffer from low morale, abuse and abandonment. Many leave their offices, broke, morally bankrupt, aged and diseased. Recycling reduces the cost of rehab for broken politicians, typically a taxpayer’s burden. At a time when the country is engaged in a war against terror, the number of disgruntled political outcasts waiting to be radicalised cannot be underestimated. Behind every warlord, is a disgruntled politician with abandonment issues?

The thing to remember is that a discarded politician can still be relevant 5 years from now! Kalembe Ndile is raw potential ever ready to be unlocked. And there is no limit to the amount of times a politician can be recycled. Musikari Kombo is pushing 70 and still going strong. Kenyan voters’ discard up to 3000 politicians (I suspect) every 5 years in the election fallout and elect a new set that they are barely able to tolerate in under two years. That is wasteful. With recycling, the possibilities are endless.

This is the message I figure the Jubilee government was trying pass to the youth. Rehabilitate, resurface, reclaim, redo. Basically, recycle for all its worth. Go out and make something old, new, once again.