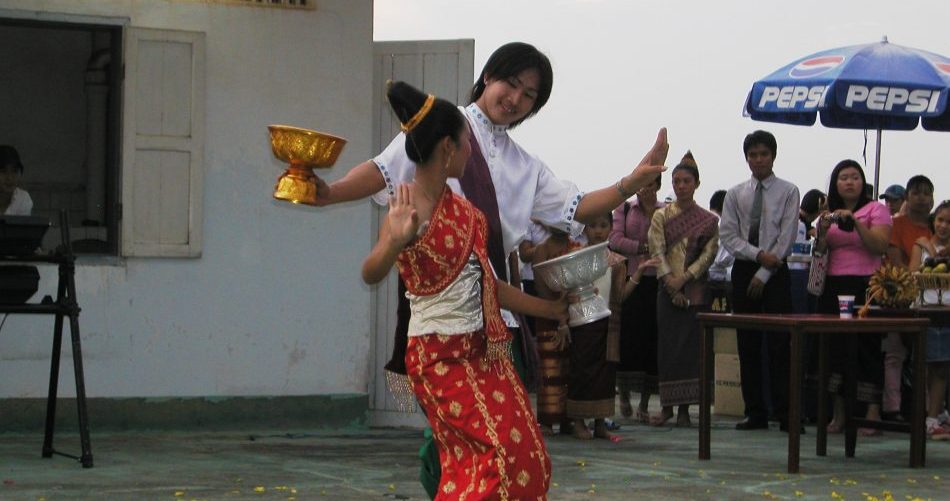 I arrived in Vientiane the Capital city of Laos on bike from the northern Thailand town of Nong Khai. I was on an ambitious “off the beaten track” journey through parts of South East Asia along the Mekong. The Mekong river forms a natural border between the Northern Thailand and Laos.

The customs officer on the Thai side of the border kept me waiting for a long time. It seemed he had never seen a Kenyan passport. Unable to find anything wrong with the validity of the travel document, he resorted to interrogation, flanked by two mean faced colleagues. ‘Mister! which country you from?”aka must be somewhere poor! I found them more amusing than annoying and an hour later I got my departure stamp. If one is Black and not carrying an American passport Thai Immigration who do not know much about Africa assume they are Nigerian (therefore crooks).

I crossed the famous Friendship bridge with trepidation. No one really knows much about Laos. I was entering on a bicycle without a riding team. Only the majesty of the Nam Mekong remained assuring. There was not a sign of traffic it was like wandering into the unknown. On the Laos side of the border they stamped my passport without so much as a second glance. The custom officer said. “You first dam farang(foreigner) come to Lao on bike…you Super –dam”. (Dam means black person in Lao) a nickname that was later to serve me well. He saluted me in with such joy it contrasted so sharply to his green uniform. I liked this country.

Laos is officially known as Lao PDR; People’s Democratic Republic. It is a landlocked country that shares borders with China, Vietnam, Cambodia, Thailand and Myanmar( Burma). All until recently communist countries. A tuk tuk driver on the Thai side of the border had joked that the initials stood for “Please Do Relax”.

Compared to Thailand or Cambodia, Laos was a breath of fresh air. It was relaxed and the human congestion that is a common feature in South East Asian cities was absent. Vientiane moved at the pace of the Mekong River locally known as Nam Mekong.

I was going to camp in the city for a few days.

Dotted everywhere were temples or wats as they are known in the local dialect. Lao is predominantly Buddhist. I hoped to gather some information about the challenges of riding solo through the countryside. There had been reports of terrorist attacks on tourists in the mountains.

After checking into the Syri I Guest house, I went out in search of the Spirit House bar. It was highly recommended by a friend who had worked in Laos. He said it was frequented by “interesting sorts”.

The bar located on the banks of the Mekong offered an unobstructed view of sunsets over the wide river. The crowd, predominately tourists, local expats and local girls were a little too friendly for my liking.

Asian sunsets are an extremely brief affair. I went to the bathrooms and returned in less than fifteen minutes to find the sunset gone, a speck of orange in the horizon. “Is that what they call a sunset?” I muttered to the guy standing next to me. He broke out in laughter “It’s famous here!” he let me know.

Anyway it was after missing the sunset that I met Fritz and Pierre. They were owners of the two Honda Bajas 250cc, in metallic grey with the signature twin lights that I had seen in the parking lot earlier.

Fritz was in great shape for a man in his fifties despite his chain smoking. I later found out that his real name was Nicholas von Sigrif, a German Baron. I had never met a baron before and was a bit taken aback by his ordinariness. He wore an ancient looking signet ring with a crest that authenticated his lineage. It looked impressive. His side kick Pierre was a full head taller and looked more Italian than French.

He reminded me of Dino Zoff the great Italian goalkeeper who captained the team to the World in 1982. Laurent was a 49 year old high profile free lance photographer. He had lived in Laos for 8 years after a stint in the Bahamas . He felt he needed to ‘elp the poor pipol of Lao’.  I nicknamed Pierre Mr. Big lenses because as he got drunk, he repeated after every shot of tequila “ I hev the best and ze biggest lens in ze Laos”.

Nicholas was a bored aristocrat who lived in castle that was built in the 11th Century in South of Germany. He came to Laos five months every year to ride his motorcycle. The Frenchman lived in Vientiane spoke fluent Lao. Between them was a wealth of resource.

They advised me how to tell old rice on sight and most importantly how to say “Cold beer” in Lao.

Nicholas reminded me to be wary of transsexuals. “If she is very cute and has sculpted body but hides her hands. It’s a lady boy”. Transsexuals are known as lady boys in Lao and form a socially sanctioned third sex category. Pierre warned me never to fraternize with the working gals. “Find a tourist at least they speak English”.

It’s a good thing I followed their advice. They gave me skills to navigate of one of the world’s last Communist bastions. This is how I escaped the clutches of a lady –boy, or so I thought.

After a few beers I left my new friends Fritz the Baron and Pierre Mr. Big Lens to have dinner and tour the town. It is safe to walk at night. I had never seen a person from Laos before this trip. I found the faces fascinating and could not decide if they resembled Cambodians, Thais or Chinese. Everywhere I passed I was greeted happily. Sabaidee!!! I kept replying as Big lens had taught me.

Later at dinner at Beau Rivage Mekong ( not as impressive as its name) the woman behind the cash register kept smiling broadly at me every time I looked up from my heavily spiced dish of fried noodle soup. There were bikes everywhere and shabbily dressed backpackers who walked in convoys on streets. As one of these groups approached the restaurant the girl at the cash register suddenly muttered loudly “No. No” and went to stand at the entrance menacingly glaring. “No have baguette for backpacker!!” she told them the backpackers.

As they drew nearer two men who appeared to be customers got up and stood by her. I watched the group pass and the relief on her face. “Where you from?” she asked? I said “Kenya”. ‘Oh!’ She said, “my boyfren’ he go there a lot. He fron’ England”. (Pierre had said working girls could be brazenly frank). She then explained her earlier rudeness, “cheap backpacker they no like to pay and have bad mouth always cheap cheap. They farang (foreigner) we poor country , no good. Me no like.”

When she started talking she did not stop. She then told me her name was Noi and asked if I wanted to go to the temple.

I said, I would rather go dancing. My two new buddies had told me not to miss out on Don Chan Palace the hottest dance spot in town. Turned out she was going there after a quick change of heart and would give me a lift. Her bike was a Suzuki DR-Z400S (a four stroke) a relatively big bike for a smallish woman and it had an electric start.

She rode fast with no helmet on, scented hair all in my face but we got there before I could complain.

As we walked towards the entrance of Don Chan, I got a chance to finally look at Noi, her hands were small and she had no protruding Adam’s apple. I felt safe and she led me through this huge entrance of this glitzy hotel lobby that seemed very empty for its size. The disco was on the fifth floor, she seemed to know everybody and sashayed her way to the bar with me in-tow grinning sheepishly. I got a bottle of Beer Lao and drowned it and looked around. I spotted a guy in rasta colors at the end of the bar who gave me the universal brother ‘nod’ and Noi quickly piped in “He fron Africa, he married”.

On one end of the bar there were stacks of working women all smiling to an assortment of foreigners. Noi kept clinking glasses with me and smiling broadly. She seemed adept at keeping all at bay and just said I was ‘her’ friend visiting Lao. As the music picked up and kicked in we both simultaneously headed for the floor. The moves caught on I really found my body relaxing to the beat as did my shady Tony Nyadundo moves to the delight of Noi who followed my gyrations.

At some pointed, I noticed the Baron standing at the bar, waving as a slow beat came on and Noi snuggled closer tucking her small frame, somehow attaching to my body looking all dreamily up at me. As we danced around the floor I saw a look of panic on the Baron’s face. Snuggled so closely to this woman, he seemed disruptive.

Before the song ended he walked onto the floor, tapped me on the shoulders ignored Noi and led me away from the floor. Mr. Big Lens was seated at one end of the bar flanked by two beauties. Suddenly the Baron thumped me on the head and said “I thought I told you to watch out for the Lady Boys!”

“I did”, I replied then did a double take as I realized I had been duped. The way Noi had handled that big bike in her very high heels was rather masculine. The way she shooed off those backpackers almost daring to start a fight. My mind was on overdrive.

In contrast to the girls in the club she may have been larger but she looked like a very normal woman. The voice was feminine, the hands dainty , no visible Adam’s apple, the breasts looked real, the backside impressive for Asian standards.

I was confused, he-she, she-he, honestly looked more attractive than most of the girls in the club. And I was definitely sober. Noi realizing her ruse was up blended into the crowd. I guess no one argues with the Baron. That was the last I saw of her that night. Good thing I did not ask her to hold my passport. Foreign travelers are known for dumb stunts.

Fritz also known as the Baron and Pierre the playboy Tycoon ended up being a great find in Vientiane. That week they took me all over town and taught me how to look and really look at the girls in Vientiane.

Seeing is not always believing and in SE Asia eyes can lie. I guess, it helps to know a bored baron.

From the travelogue archives: This piece was originally published in the Drum East Africa magazine in the year 2007.