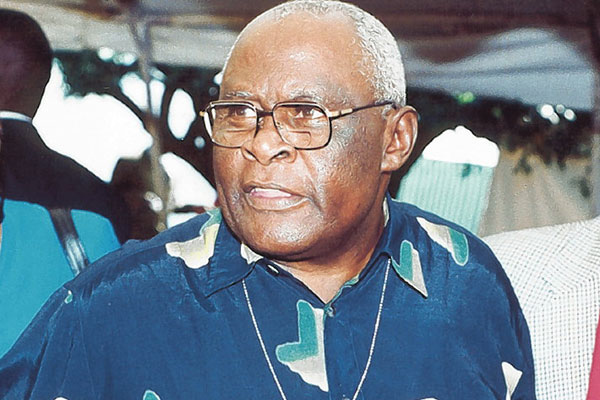 August is Kenya’s black month, notorious for regularly recurring tragedies that claim innocent lives.  Meaningless misfortune befalls citizens throughout the year in these parts but August superstition stands because of two traumatic events that scarred the nation’s psyche; The August 1st, 1982 attempted coup fronted by Kenya’s Air force service men and the 1998 United States embassy bombings in Nairobi, courtesy of Al Qaeda that occurred on August 7.  As fate would give, August 2012 did shore up with a disturbing amount of needless deaths that hogged headlines throughout the month.

I will remember it as the month that claimed ‘the people’s watchman’, nationalist, reformer and fiery politician Martin Shikuku. Throughout his political career, Shikuku was one among few that dared to put his personal comfort on the line and act against injustices of the ruling state. However it was more his pragmatism rather than his politics that I would come to admire of the late Shikuku.

Around 2004, Shikuku was at the centre of a bizarre news story.  Contrary to custom, he had set in motion his funeral plans by digging a grave and purchasing a coffin. As expected, there was hue and cry. It is viewed as bad omen to prepare for death in indigenous African tradition (the term African is used very loosely). This action was akin to courting death and the grim reaper rarely loses a challenge. Shikuku went a step further and acquired four bulls that would cater for the mourners in the likely event of his death.

Contrary to superstition held, he would live for another 8 years before succumbing to prostate cancer in August. One would expect that Martin Shikuku’s explicit wishes would be carried out to the letter but murmurs of disgruntlement were reported. This manner of pre-planning was a break from tradition, perhaps a little abnormal. Some ‘elders’ (the term is used loosely) were not keen to embrace change, in the community’s burial ritual. The dictates gives elders the role of burying the dead in the community and people are largely dissuaded from getting involved in the planning of their own funerals. In all our modernity we keep on dragging these myths from years yonder. Death is still viewed as an accident as opposed to a truth of life.

In my opinion, Shikuku’s foresight is worth emulating. In the clamour for change and transition in keeping with the times, we conveniently forget to include redundant death rituals. Society is changing but it is all in theory especially in practical matters like disposing a corpse after passage of life.  The emotional attachment to dead bodies and scant regard for the living is an irony that confronts one at most funerals. Funerals are social events positioned to impress mourners. Coffins that retail for a quarter a million Kenya shillings are features of classy funerals that provide a stage for opportunists to make capital or settle scores. Life may be lonely but after death concerned relatives materialize from obscurity to demand a say over the suitability of one’s burial site. The dead will have to be patient and wait a couple months for the courts to settle the ensuing dispute. These spots should be designated early to avoid conflict.

By pre-planning your funeral in essence you navigate the triviality of traditions, times, age, religious affiliations, class of how your cadaver is to be disposed. Ideally only your pre-written obituary should be read, precisely your last testament and for all the politicians chasing social capital at funerals, it is time to get a life.

4 thoughts on “Of Shikuku And Funerals”