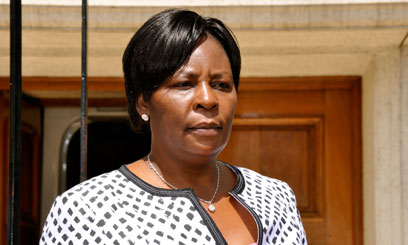 When a tribunal investigating an abuse of office incident involving deputy Chief Justice Nancy Baraza recommended her removal, I marveled at how things have changed. That a lowly security guard, Rebecca Kerubo could bring down Kenya’s highest ranking female judicial officer clearly shows the irony of justice.

This is a country where reputations are enhanced by sex scandals. People win enough admirers to start a church after master minding million dollar scams that loot public funds. Ministers even fraternize with drug barons and the most they get is disapproving looks in public. In the league of official abuse, Nancy Baraza’s scuffle with Kerubo was a misdemeanor the equivalent of a school girl caught trying her first cigarette. Surprisingly, not even her past record could salvage her reputation. Nancy Baraza made her name in FIDA, as part of the formidable federation of women lawyers who gained a reputation for defending women’s rights especially poor abused women who could not afford legal representation. But at the top judiciary echelons you have to be seen to practice what you preach and on that score, the deputy CJ effectively shot herself in the foot.

I suppose after this incident, Nancy Baraza’s famous words, “You should know people” ought to be paraphrased to read, “You should know people are watching”. Rebecca Kerubo’s minor assault case was destined for burial in the gutter press back pages. Unfortunately for her, the Twitter vigilante online marshaled by self declared people’s watchman Robert Alai picked up the story. In a matter of hours it became a trending topic that exploded into a furore for two whole days before mainstream press caught with the events.

Baraza totally underestimated Kerubo’s underdog appeal and she never imagined Kerubo would be incorruptible turning down her peace offering. I empathize with the Deputy CJ. She clearly had no prior experience with watchmen. She was probably never compelled to jot her details down in a tattered hard cover book at the entrance of a public building. She probably never knew that lack of I.D card could deny one entry to most of the city’s offices. Nobody ever told her that in Nairobi when a security guard demands to inspect your boot at the entrance of a supermarket mall it is best not to argue. It does not matter whether you own the building. While you may imagine you have the power, the security guard wields authority.

In a city that is lined by security guards in every corner, most Nairobians have learnt through experience never to make mistake of getting into an argument with security guard or matatu tout even when you believe they are in the wrong.

Security guards are everywhere and are generally amicable, hard working Kenyans holding the short end of the stick accustomed to swallowing daily crap from the upper classes at their work stations. They endure long hours, hostile work conditions, low pay and often the first casualties in the line of fire. They are ridiculed, dismissed on a whim and play a largely thankless role in securing other people’s lives. All through their trials, they are expected to remain courteous and vigilant.  Therefore Kenyans know that when you find a security guard who is not smiling or responding to your jokes, it is best to fall back in line, submit to a body scan and sign the visitor’s book.

15 thoughts on “Of Nancy Baraza And Security Guards”