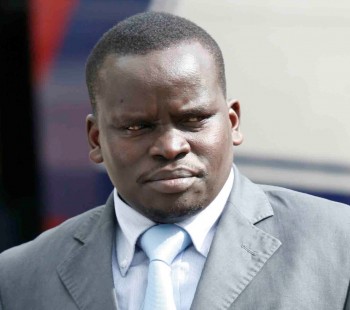 With all the debate generated over the ICC cases at the Hague, one character keeps missing out in the national conversation. He may be seen but he is never heard. Nonetheless, he sticks out like a swollen lip, an inconvenient reminder that the small guy also has some responsibility to bear over the 2007-2008 post- election violence. In case it escaped your attention, Joshua Arap Sang is the forgotten suspect number 3. He would have been absolutely irrelevant if fate hadn’t bandied him with larger than life characters. He is the little guy you wish to ignore but every so often, he makes the front pages, diminutive in size, cast against the confident Deputy President William Ruto. Always subdued, a pained expression permanently scrawled on his face and it is no longer seems to bother anyone that he may be innocent.

For most ordinary men, it is fairly normal to be considered guilty and until you proven innocent. Sang is the little guy, if we are to literally stretch the metaphor, and in a country where only small men with a lot of money to matter.  Sang represents the Kenyan average Joe and the stereotypes that define it.  He is not handsome, not rich, has no family pedigree to speak of, no social status to leverage striped of his job title and sadly, no special powers to move the masses. Sang is what is referred to as common mwananchi. The unidentified crowd, that materializes of out of thin air by the roadside when a beer or petrol tanker overturns, to make quick gains off someone else’s loss.

He may have strong opinions about the state of the nation but he is seemingly powerless to do anything about it. Sometimes, they are called Wanjiku, a term popularized by civic society activists during the writing of the new constitution. It is the elite’s way of defining the class divides between the leadership and the ‘great unwashed’, the hoi polloi.

In most instances, they are invisible unless they appear in an agitated mob because the only way for the common man to be recognized is to agitate and threaten to wreck the peace and private property. It is the most effective way to draw attention to one’s existence.

When the going was good, Sang was probably at the height of his popularity. Today he is that radio presenter who stubbornly refuses to be forgotten. When a big man makes a mistake, everyone rushes in to cover for him and turns into a defense team because in the national psyche, the overlords are beyond reproach.

For the common man though, you learn to bear your own cross. At your greatest hour of need, you will be surprised by how quickly fatigued people get with your misfortunes. If you refuse to respond to medication after the first visit to the hospital, you will probably have to rely on your good deeds from the past. If you did not make your contributions regularly at family or community gathering in times of misfortune, the community reprisal will be harsh. Misery might love company but company is not always reciprocal.

In Sang is the recurring story of the common man in this country, used and discarded as soon as the window of convenience closes. He reminds us to humble ourselves, keep our heads low, be thankful for our little fortunes and go through the motions, accepting and moving on without fuss.

2 thoughts on “Of Joshua Sang And The Forgotten Man.”