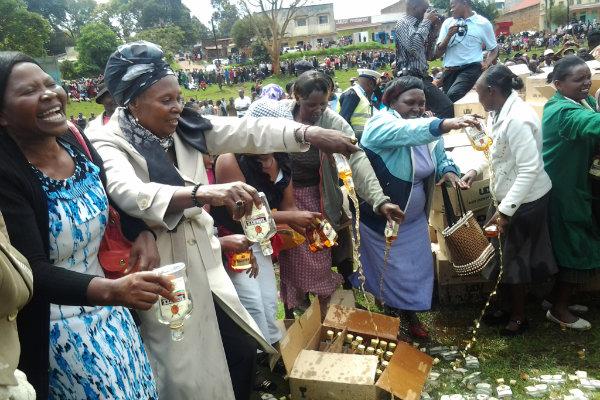 News bulletins have been dominated with clips of gangs of young men and angry women in Central Kenya moving from bars to liquor dens, flushing out drunkards and destroying merchandise. While much focus has been on destruction of private property and the excesses of mob justice, I feel most of the reports have been framed out of context in mainstream media channels. The stories out of Central Kenya, in the wake of the alcoholic menace tend chase the battle of the sexes narrative, pitting the hopeless drunk against the angry woman. In a country where patriarchal structures are fairly intact, a woman clobbering a man, is akin to a man-bites-dog story and makes for captive headline news.

Alcoholism is not fresh news. Drinking alcohol is a national past time and a prevalent social activity. Incidences of poison masquerading and sold as alcohol openly have been around for close to a decade. In the recent past, religious organizations wielded an effective war against alcohol abuse but the church lost significant sway on the congregation and its leadership no longer enjoys the moral authority to speak out against social ills. Government prohibition has failed because corruption is a way of life and those charged with regulating drink are either sleeping with enemy or looking the other way. Kenyans are accustomed to a pattern whereby concerned authorities, in classic knee jerk fashion, employ elaborate public relations stunts when the alcoholic-related tragedies draw national attention, waiting patiently for the news cycle to move on before reverting to business as usual.

This was the trend until the women of Kiambu, Muranga and Nyeri rallied against a vice destroying their rural communities. The politicians who prominently jumped onto the bandwagon in typical Johnny-come-lately fashion were only been opportunistic. One would be hard-pressed to find a more apt example of preaching water and drinking wine.

Apart from John Mututho who has been fighting a one man crusade against alcohol abuse, most politicians hardly prioritized alcoholism as key social concern before the much publicized presidential directive. At the rural and lower income levels, politicians only rear their opportunistic heads to address social issues when their interests (read votes) are endangered.

The women are angry because the system has simply failed its people. No one trusts the chiefs, the police or the justice system. The poison brew merchants operated with impunity until the women consolidated their numbers and hit back. When there is no mean of restorative justice, a thirst for vengeance grows. All it takes is a spark for years of pent up energy to be expended, often in disproportionate amounts in search of retribution. There is an emerging culture in Kenya where violence is tolerated as an effective means of drawing attention to one’s issues. The violence is time and again underpinned by a sense of revenge.

Many Kenyans feel that justice system is compromised. With growing perception of an unequal justice system protecting a category of untouchables, aggrieved communities feel they have earned the moral right to take matters into their own hands. The problem with mob justice is that it knows no bounds and can become disparate. It can also become addictive.

The forgotten victims of official incompetence are majorly young men caught in a vicious web of vested interests of regional politics and capitalism. These men are drinking not because they are poor and jobless. They drink to escape the harsh reality of a weakening social structure and a society that rendered them invisible and disposable. Alcoholism is a symptom of externalized stress, escapism and depression. Yet very few seem to see them as legitimate victims in need of genuine empathy and rehabilitation. These are men emasculated in their homes, belittled among their peers and profiled by the police as social misfits and regularly arrested for misdemeanors. 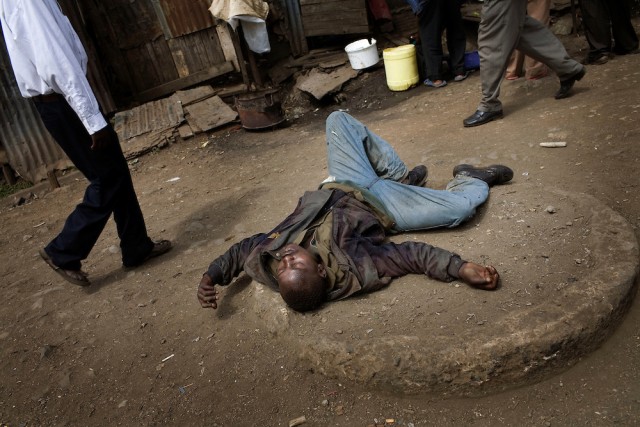 The visceral reaction directed at these alcoholic dens and the poor men caught in the crossfire points to a deeper symptom of emerging militant opposition towards overt patriarchy. There is an ingrained notion among some women that men are flawed and should be taught a lesson they never forget. In the wake of the alcoholism malady, gender violence has become socially sanctioned in some pockets of the country as a means of dealing with domestic problems. While the focus is trained on the victims along the lines of an eye for eye retaliation, we pussy foot around the root causes, corruption and impunity.

The sin of apathy that our society is in danger of committing in the face of this alcoholic tragedy, is to be indifferent to the plight of those men caught in the vicious cycle of alcoholic addiction. The Italians have saying; when your neighbours’ house is on fire, carry water to your own.

1 thought on “Of Hopeless Alcoholics And Angry Women”