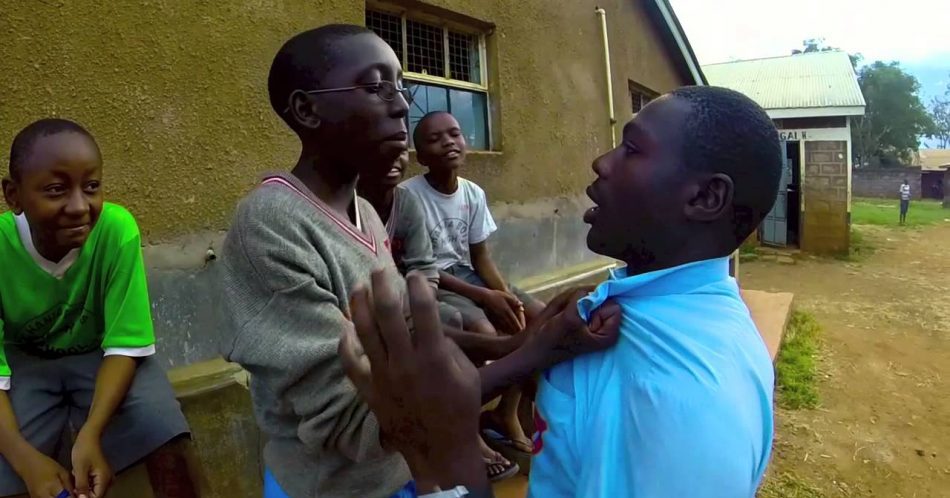 A long time ago, there was a student called “Keep Left”. Three years after Keep Left completed high school, his younger brother joined form one, in a different school. One afternoon, footballers from Keep Left’s former school who were the national champions, arrived for a friendly match. The visiting side was dominant and after the game, the young lad joined the queue to greet the champs and introduced himself. “Do you guys know Keep Left?” The mere mention of the name, caught the captain’s attention and when they realized that he was indeed, Keep Left’s younger brother, the visiting team fawned over him.

Keep Left was a real life character. He made his name as the fist of fury in his school years in the late 70s, a boxing champ and the kind of brother they said could rearrange your dental formula. All the juniors followed the laid down protocol and avoided his right side. That was his good side, the hand that he used to eat or punch anyone who gave him lip.  Even in the mid-80s, almost a decade after he had left the school, his rep only grew bigger. The new arrivals who came swaggering in, desperately tried to live up to Keep Left’s larger-than-life image.

Every high school has its Keep Left. A law unto themselves, operating with impunity and both loathed and celebrated for their notoriety. A former student who in this age of modern terrorism would be of Osama bin Laden proportions.

Therefore when Alliance Boys made the news for a bullying incident, most men who had gone through the boarding school system responded with a sigh!

Many probably looked back at their induction to high school life with a sense of nostalgia. Bullying was a male rite of passage. It was tolerated, sanctioned and even anticipated. This was the little price boys had to pay for a good education. They remained grateful for the bad experiences of high school that prepared them for the realities of the harsh world.

The enduring lesson at the end of a high school education for most boys, is that bullies are part of life and they are good for building character.  Sometimes, our enemies and haters are instrumental in bringing out the best in us.

To understand why bullying continues to thrive, albeit in different forms, one needs to understand the surroundings. High school is where teenagers are separated from their parents and herded to camps to be converted into men and earning an education while at it. When you pack hundreds of testosterone laden young men in an enclosed environment, each will try to establish and reinforce their status.

Schools are governed by a rigid vertical power structure, with the headmaster as the undisputed king, the deputy as the law enforcer assisted by a select group of overlords known as prefects. The pack mentality takes over as boys do what they must do to gain identity, status and privilege as members of a dominant pack. They soon discover that brute force produces quicker results than reasoning. Gaining control over others is how they see power demonstrated. With this experience, they cede their will and individuality to the pack under the leadership of a charismatic alpha male, a Keep Left.

Bullying is thus justified as a means of retaining power, privilege and respect.

In school, masculinity like good grades are both privileges to be earned. A little bit of suffering is considered necessary on the journey towards manning up.

In this competition for dominance and identity, the aggressive boys rise to the top, as the alphas of the group and they are exalted by the school administration for showing leadership qualities. They are allowed to police their own territories and wield power over others in a power hierarchy that gives privileges to those deemed as the leaders of their packs.

Bullies are confused for alpha males but a true alpha knows who he is. He does not need to announce it by exploiting his position to gain status over others.

Endemic bullying in the Kenyan school system is a reflection of a masculinity ideal that is about maintaining status, dominating through coercion, exploiting the vulnerable and applying every one of the 48 laws of power to remain boss.

Who people think you are, is more important than who you are. The big boys worry more about the currency of their reputations, than their character. An upright character in this country is turning out to be a liability for career progress and becoming a thug in a suit is what the hustle constitutes these days.

Building an identity held up by dominance and aggression is building one’s house on shaky ground. Sooner or later, another dominant male will show up to claim your scalp. Instead cultivating a healthy sense of identity and investing in an upright character is a better long term option.

Those we celebrate as alpha males in this society are nothing more than refined bullies. They are dubious high status males, who will do anything, just to gain a rep.