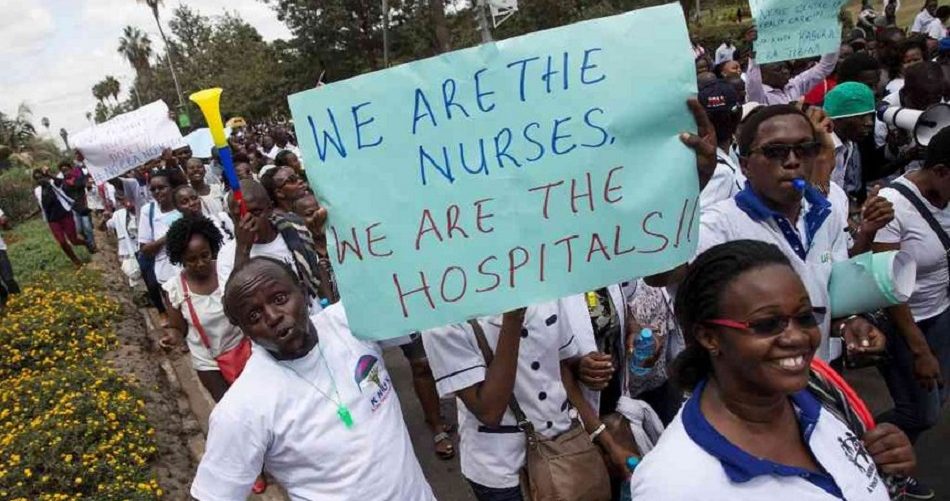 In other news, the countrywide nurses strike crossed the 120 day mark and did not make a bleep on the headlines. With the country in the throes of an election tussle, I suspect the nurses strike will sneak right past the 150 day mark without so much as a trending hashtag. It would take a nuke war in the Korean peninsula to divert the national psyche off the election drama. The nation is binge watching political news and all else can wait, even health care.

Who cares about the caregivers? The truth is that privilege and sheer good luck spares many from the trauma of healthcare in a public hospital, where one can get a real grasp of the ongoing public health crisis. Nairobians talk about the nurse’s strike in the same way we talk about an unexpected jam during the off peak hours on Mombasa road. “Ah, bloody hell!” We treat the news as a mild irritation, something beyond one’s control like a growing mound of garbage in a neighbourhood you do not live in but have to bear the stench on your daily commute to work.

Privilege affords one the attitude of aloofness. This is the hyper normal environment we exist in. Imbibing daily reports of absurdity come with the reward of a reassuring feeling of normalcy. I knew I was in the deep end when I turned on the news after the recent anti IEBC demonstrations and did not come across the report of a single death or casualty. Highly abnormal. I was bothered by this turn of events but my sense of normalcy was restored when I bumped into the story of a man who drove a car at high speed through a group of protestors. I went onto social media and found the clip for my the daily shot of anxiety that I need to get through the night. These days I prefer my news tragic and bleeding. It is not good for my health but I have become like a millennial binge watching the Game of Thrones series. The violence is too compelling to miss out. It leaves one feeling totally gutted and helpless but like a drug addict, I promptly return for a dose of misery as soon as my angst levels drop.

It should be baffling that the crucial health sector would be receiving such scant attention from the public. Yet in keeping with Kenyan peculiarities, the nurses are not enough of a big deal. At least not yet. You wonder why?

The answer is likely to found in the Kenyan public mind. The low perception of nurses is influenced by our education and socialisation. Doctors are placed on a pedestal. Medicine is a noble profession, the first among the big 5 of coveted professional careers. Every bright and ambitious kid in school wants to be either a doctor, a lawyer, an engineer, a pilot or a leader (byword for politician). Having a personal doctor is a mark of high status. On the other hand, to be a nurse is to be content to settle for the crumbs that fell off the medical career table. Ask anyone to name 5 famous doctors and you get back 10 names as a bonus. Ask the same person to name 5 famous nurses and all you get back after deep thought is Florence Nightingale and probably the Night Nurse that Gregory Isaacs sung about in his reggae hit song.

Nurses are fixtures in a hospital, seen but rarely appreciated. Nursing is in the same league as traffic policing. We seldom realise their value until they go missing for a long stretch.

The effects of the nurses strike does not seem to be abating but it still creeps into the news almost as an afterthought. As though the editor throws remembers to include it in the news roll like a side dish of ugali saucer, to help complete the stew of bad news. The consequences of the national nurse’s strike are starting to manifest in all the typical marginalised pockets of our sick nation.

Nurses maintain vaccination and immunization schedules and with them out of commission the medical horrors have started to stalk public health in real ways. Cases of leprosy, that biblical disease have been on the rise in the coast. Diseases such as elephantiasis and polio generally considered extinct in civilized societies have reemerged. Malaria is raining havoc in Baringo and North Eastern. The public health system is in ICU and the government is hovering over it like vultures anticipating its imminent death.

Nursing is the actual backbone of the health care industry. Healthcare without the nurses is akin to running a football league of smart managers without players or a restaurant with excellent chefs and no waiters. Nurses are the wheels that healthcare runs on and our health bus is resting on stone blocks, deteriorating by the day. The nurses have taken on thankless task of pushing public health care reform but the citizens who they fight for have failed to realize that the misery of caregivers is a communicable disease.

Here is a bitter pill to swallow. Nurses are hospitals and we are all diseases waiting to happen.