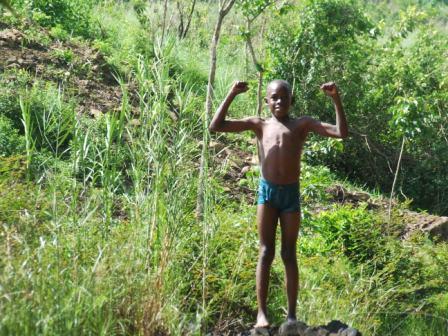 I used to live in the city. I had been there. Done that. Almost became a Champagne capitalist. In between life seemed to crawl from one traffic jam to the next. Stress was the byword for career progress. The cost of living rose and my income was stuck in second gear. I was caught between a frugal existence and the dangling carrot that was the elusive better paying gig.

Stuck in a rut, it took three world-televised events to shift my perspective. The global financial recession; Obama nailing Osama;Family Radio dotcom head honcho Harold Camping, doomsday judgment day message. The end of empire was the recurring TV broadcast. It was the kind of prompting I needed to look beyond the city limits to a rural lifestyle that offered respite. Therefore, I ignored the horrified look of my peers, closed shop, packed the jalopy and drove across country to a little village in Siaya County. Out there, by the banks of the raging river Yala, lay the family farm.

I have always viewed the rustic life as idyllic. No noise, natural smells, fruit from the crop and people did not think it was nuts to slow down. Doing nothing was seen in the positive light of contemplation. No need for gym membership when you have a farm to weed or thickets to clear. I had this really warped notion of living up to the neo eco-man ideal, surrounded by abundance in nature to provide for my material and spiritual needs served with fair amount of eco-friendly drivel.

Perhaps I was driven to this state by those blonde dates who all thought that farming was so cool and manly. Well, as Public Enemy once said, “Don’t Believe the Hype”.

Rural life is not for the faint hearted and there is no room for glamour on a farm. Rain-fed agriculture is simply a gamble with the elements. Waiting for seed to pop from the bare earth is an exercise in patience. I was hardly prepared for the frustration of listening to thunder echoing in adjacent valley as pregnant grey clouds gathered and then drifted out of sight without as much as a drizzle. I stopped poking fun at weathermen and started to pay attention to their forecasts but it did not change a thing. Often, they seemed to be just clueless as I was. It became apparent rather quickly that I was ill prepared for the reality of the farming life.

No one bothered to tell me about a new range of adversaries from the insect kingdom. Vicious buggers like safari ants and their toe-seeking-pincers. The industrious termites that held this stubborn belief, that all the dry wood in world belonged to them. Anyone thinking of venturing into organic farming would be advised to give it deeper thought. There is a whole universe of microscopic invaders that love their veggies fresh that you have to contend with. Each microscopic bug has a separate pesticide product. Most with names that only a chemistry major could pronounce.
You would think the creepy-crawlies are bad, until you encounter monkeys that are quite capable of driving one bananas! Vervet monkeys might look cute scratching their butt in a national park. On a farm, they were a marauding gang out to wreck havoc. They are smart, they know the terrain and they do not scare easily. Apparently monkeys have innate intelligence to discriminate between adult males and females. They are aware that women seldom throw stones and are likely to give them a free pass just when you thought you cornered the thieving primate. As for birds, not all are equal. Small birds, the weavers, bustards, larks, pigeons add to the provincial charm with constant chirping. The birds of prey are different flock altogether. Hawks and eagles do not eat greens. Not when they can have chicken. That means a chick a day keeps the hawk in sight.

Some skeptics are probably thinking, “Maybe aquaculture” the fancy term for raising fish in a pond. I took on tilapia farming, a big fad in most of the country. The advantages seemed obvious. Fish are a constant source of protein, profitable as a product and low maintenance. That was before I realized that birds are practically pests around a fish farm. Expectedly, there was nothing in the manual about airborne pests. Birds can be incredibly worthy adversaries. Armed with aerial supremacy and telescopic vision they are hard to catch in the act. I was out manoeuvred so many times that I came to develop a twitch whenever I saw a grey heron. Herons love their fish raw. And so do yellow billed storks, marabous and wild ducks. When one spots Marabou storks, poised gracefully within range of a fishpond, trust me they are not there for the ambience. Not to mention those creepy monitor lizards that take off on two legs running upright, skimming above the water and leaving one aghast. It is not as though you can take a complaint to the Kenya Wildlife Service. Not when farmers upstream are dealing with a hippo menace. Eventually I have learnt an important maxim. Do not count your fish before a harvest.

Frantic as it may seem, this is all an attempt to slow down and experience life in a fundamentally different way. In the city the only way to hang on was to speed up. In the countryside, the only way to live, is to do it slow and pick the lessons in your stride.

11 thoughts on “Making Of An Eco Man”