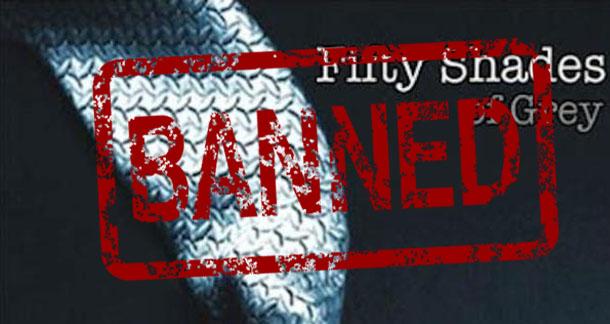 I am a law abiding citizen who stays out of trouble but when government attempts to dictate what I can read or watch, I become reactionary. The Film board will probably cite public good and protecting the young from negative influences as the logical argument for the ban. Which is valid ignoring the irony of free-to-air TV feeding the masses with explicit content in the name of foreign music videos, need I mention; the twerk apocalypse. The internet and decent 3G speeds offers an endless stream of porn that would make “50 Shades of Grey” appear rather tame and if we were really serious about censorship we would have seen some real measures. No surprises there. This is a country that banned raw milk hawkers selling cheaper natural milk and promoted processed milk supposedly in the interest of public hygiene.

I got desensitized to bans early. I grew up with government bans, reserved largely for literature that stimulated thinking beyond the sanctioned national approved status quo of Peace, Love and Unity. In the 70s straight to the 90s, there were a list of banned books that could land you in serious trouble. In those days, police would raid  home libraries looking for seditious and subversive reading material that could send one straight to Kamiti Maximum prison for anti-government activity.

Handling anything written by Karl Marx, especially Das Kapital was akin to subscribing to Communist ideals, an act of treason in the Nyayo era. Before that, most of Ngugi wa Thiong’o’s books were too hot to handle.  I Will Marry When I Want sent a lot people to detention without trial, banned in 1977. Petals of Blood got Ngugi arrested put in detention and “Decolonizing The Mind” only added to his woes. The play Animal Farm George Orwell’s classic, was banned in 1991 for its harsh criticism on the greed of the leaders. The phenomenon of MPigs is still alive and well two decades later. David Mailu’s After 4:30 was banned for its sexual content and its social relevance totally misconstrued. In the last decade, S.A. Mohammed, author of  Kitumbua Kimeingia Mchanga, written in Kiswahili, was deemed sexually explicit and pornographic by a church backed Parents Caucus. Chinua Achebe’s Man of the People also got blacklisted for its ability to ‘excite the students’ imagination and stir their sexual desires’.

Thanks to past trends, banned works of art have always stimulated my curiosity. I am a Newton kind of guy. Millions saw the apple fall from the tree but (Isaac) Newton asked why. Thanks to the Film board’s latest banned movie, I am almost certain that a whole section of Kenyans are now trying to get their hands on “50 Shades of Grey” and the resourceful are not snoozing on opportunity. Piracy is one of the few areas of business where bans are godsend. A banned movie is a windfall and DVD movie hawkers, have probably stocked several copies of the banned movie at the bottom of their boxes doing rounds as we speak.

The long winded point I am trying to make is that, nothing draws us to work of art faster than a ban. Curiosity might have killed the cat but it enlightened the dog.