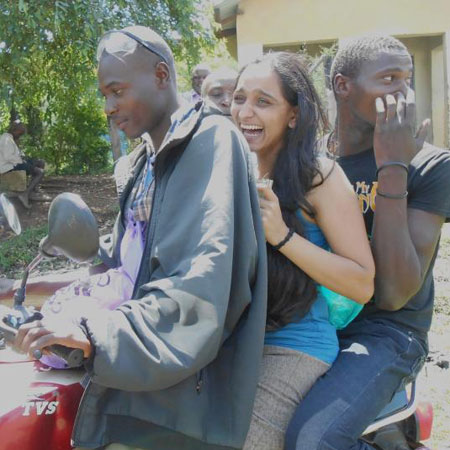 It earned an exclusive tag in the weekly paper. The feature story of an African man ‘black Kenyan’ who fell in love with an Asian (which is the local euphemism for person of Indian or Pakistani extraction) woman. An Indian girl had settled to a village life with a man’s whose highest station in life so far, was as a casual labourer. The focus of the article was not the celebration of human emotion over superficial barriers. Rather, it questioned the audacity of love. Why would the daughter of a wealthy man walk away from the comfort of her charmed life to wade through a humble existence with a man who used to wash her dad’s car? Didn’t the crazy young man understand the consequences of biting the hand that feeds you? How on earth did he get the Indian girl to fall for him?

One hundred years since the first African and South Asian minority interaction in British East Africa, relationships between the two races are still defined by rigid stereotypes. Despite the overwhelming evidence of two cultures heavily influencing and borrowing from each other, bigoted mind sets continue to define social interactions. Black and Indian marriages are not as commonplace because the class, cultural and racial biases that keep us apart are still alive and well.  I personally know several Blasian ( Black and Asian) couples living happy lives but these relationships are not as visible as say African and Caucasian marriages.

Interracial love relationships should not be news in contemporary Kenya where Diwali is celebrated by all nationals but it is because the class distinctions are largely ruled by economics.

Timothy Khamala and Sarika Patel’s love story grabbed headlines mostly because they were young and naïve enough to cross well established class mating lines. We are a society that sticks to very clear lanes that define mating within class and race. Individuals of different races mingle freely but when it comes to mating, class and race becomes a priority especially for women. Doctors may bring home waitresses but only a strong headed female lawyer can announce a future with a mechanic. We are typically drawn to what is familiar and the familiar in most contemporary relationships is class extraction. A young university educated and city bred Indian man will date an African love interest more easily than an ethnic companion from the sub-continent who has never heard of Tupac.  Once we have established our comfort zone in established social classes, love has a better chance of flourishing.

Typically, it is the women who always seek out the exotic fruit and break social taboos. Men tend to be a lot more conservative and restricted by peer influence. When women decide to love, they make bold choices that often shake up rigid social molds. Social advancement and integration has always been led by women. Without the audacity of a woman’s heart, the phenomenon of individuals such as Barrack Obama would never have been possible.

Sarika is a change agent and a woman who deserves a little more credit for challenging stereotypes that rule class and race relations. The oneness of Kenya is a loose construct that rarely holds up to scrutiny.

Sarika is saying that lower class men have something to bring to the table too. That they are sincere and committed lovers who should not be passed up in the search for happiness. She also reminds us that unlike TV, they are no ideal relationships. Couples start out with love when they are young and persevere through struggles together, growing stronger with each new challenge and eventually, find rhythm and prosperity in their lives.