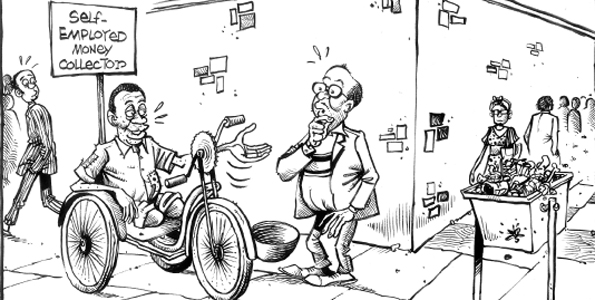 July 22nd marked 9 years since the passing of arguably Kenya’s greatest columnist, humourist and satirist Wahome Mutahi fondly known as Whispers. I grew up reading Whispers column that he sustained from 1982 until his demise in July 2003. Whispers wrote political satire at a time when independent thought in Kenya could get one incarcerated. He paid a huge sacrifice, serving  detention and made a substantial contribution to the quest for intellectual freedom in mainstream press.

I dug out this tribute written in 2003 after Whispers sudden passing. As I struggled to sustain the Mantalk column at the time, I always turned to Whispers for inspiration. He was the gold standard and 9 years on, he still continues to inspire.

It is really difficult trying to eulogize Whipsers, especially after all the glowing tributes that have paid to the legendary columnist. Whispers, for a lot of budding writers like me represented the dawn of a new era. He opened a whole different mode of communication and possibilities previously unknown to Kenyan writers. For the longest time, newspapers were a bit too cliché. It was like editors and journalists were incestuous and caught in between was the reader who was constantly missed. Wahome Mutahi changed a lot of that. He went out of his way to talk directly to us and when we didn’t listen, he broke down the language, rid it all its superfluous trappings and spoke directly to his audience.

He constantly reminded us that the writer’s prime duty was communication and if the English language got in the way as he embarked on this process, “God save it”. All alone, he had reincarnated a process that had always been a part of our very culture, the oral narrative communication.  He painstakingly picked up references that were closest to us and constantly reminded us that we had to own our stories. In school we are taught to read words and emulate speech patterns. Whispers taught us to never let words get in the way of what we were trying to say. The language was simply a medium that would be used to carry home the message. Wahome gave simplicity a whole different meaning. In a sense one would say he made nuclear political intrigues of the Moi era as accessible to the masses down to the most elementary readers. Whispers’ column was a mass movement and every Sunday we picked up the Sunday Nation to laugh and reflect with Wahome. The man understood his role as a public watchdog. It was never about him. Kenya was a repressive society in the 80s and 90s and for 20 years Whispers taught us laugh through some of the toughest periods in this country’s quest for a more open democratic space.

Sustaining a weekly column for that stretch of time is almost impossible. It is the sort of achievement that cannot be measured. That would be playing down his genius in the most unacceptable fashion. Brilliance now that I think about it, resides in the likes of Wahome Mutai. They say each one of us is given the capacity to serve. Each one of is endowed with a genius but very few of us ever use it to the benefit of others. You hear people talking about callings; that voice that beckons one to serve and share with society a slice of that genius. Your genius in many ways defines your calling in this life and what your role is in the greater span of things. Whispers figured out his purpose early in the game. He was going to wake us up to the reality and even when it pretended that we were not listening, or perhaps knew it all, he never abandoned us. He simply kept writing.

It’s a selfless act and the steadfast practitioner of this principle cannot afford to let brilliance get in the way. Wahome had the opportunity to wallow in the trappings that came with the position he occupied. His column would have opened doors to great financial rewards but the man managed to contain material aspirations that consume many in his position and this perhaps is the main reason his legacy will endure.

I never knew Whispers personally but I met him once. The memory of that occurrence is still as vivid as it was then. It was five years ago and I had started writing professionally. He was a replica of the caricature that headed his column, his look very down-to-earth. He had on a black sleeveless jacket, the kind that photo-journalists prefer, black trousers, a white shirt and a look that really failed to impress.  You think of great columnists like Wahome as a different species. In many ways you hope they will relive the fantasies you had about their person in real life, then you meet an icon and the perception changes.

Unlike the façade of warmth and charisma that seems to trail contemporary celebrity figures, Whispers was rather flat. I was almost disappointed. This wasn’t the great Wahome Mutai I knew, because Whispers was no ordinary man in my thinking. But this man crossing University Way headed towards the direction of Uhuru Park was a tad bit too ordinary. The most recognizable name in current Kenyan journalism had just walked across the street like he was a nobody.  You shake your head and the lesson in humility never leaves.

The Whispers column has been retired after 20 years. The sheer magnitude of that act makes his column simply unparalleled.

Two decades years of freedom, of alternativeness, of introspection and humour.

Rest in peace Whispero. We are richer for your presence in our lives.

11 thoughts on “In Memory of Whispers”