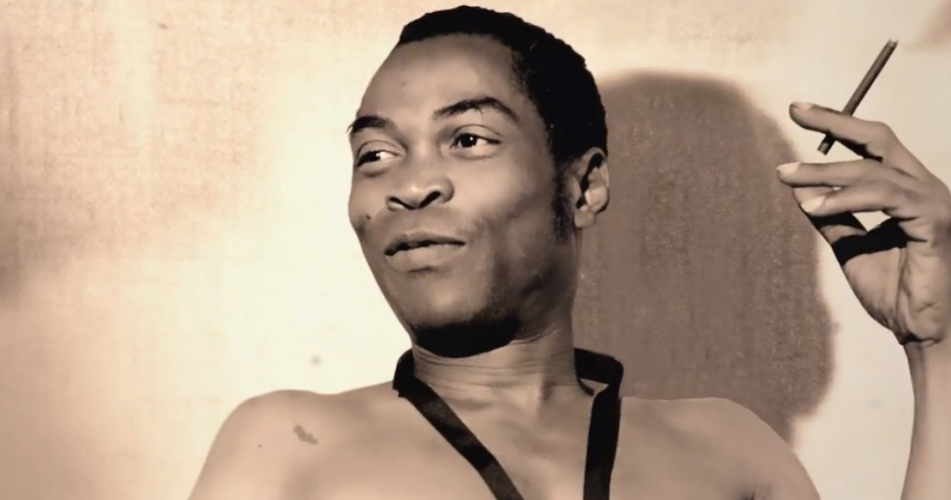 Fela was sweet; perhaps not an adjective that would normally be used to describe this tornado of a man, but Fela was sweet to me. The sweetness that I perceived in him emanated from his love for humanity; particularly for those who had drawn life’s short straw. Hundreds of people depended upon Fela for a living. Many more than he needed to run his Lagos club, The Shrine, or to play in his band.

I saw him as a social engineer, concerned with issues of injustice, corruption, the abuses of power. He was ready to lay his life on the line in defense of such causes, which he did on countless occasions. For his trouble he was beaten with rifle butts, endlessly harassed, imprisoned, vilified by the authorities, despised by bourgeois society (whose sons and daughters were captivated by him) His house was once burned to the ground by a thousand soldiers after they had raped and beaten his followers, thrown his mother and brother from a window, both of whom suffered fractures (his mother was ultimately to die from her injuries) Each time they were to beat him, though, he always bounced back with a vengeance, stronger than ever. It is my view that the only thing that kept him alive and the ultimate source of his strength, was the love the people had for him.

And his music – the rumble of thunder and the crack of lightning – layer upon layer of sublimely interwoven rhythm and melody, tangled in a delicious knot of divine inspiration. Deliberate conspiracies of hot brass woven around the intricately hypnotic consistency of bass and guitar lines, all driven by the dual forces of lavish percussion and Fela’s own passion for the precision of his musical vision. Heaven help any musician who might stray from his given task. Fury would descend upon him until, in mortal terror, he would struggle his way back into the groove.

The icing on the cake of a Fela performance were his singers and dancers; fabulous glittering unreal creatures from another world who would exude waves of sensuality and downright sexiness that you could cut with a knife. All in all, thirty something people on stage, each playing their part in what Fela called the ‘underground spiritual game’?

In the centre of this audio-visual feast for the senses, Fela reigned supreme. He was everywhere at once; playing keyboards, soprano or alto, the occasional drum solo, a sinuous dance from one side of the stage to the other and then it was time to sing, the ever-present spliff held in his elegant fingers. No moon and toon and joon for this articulate firebrand. Only eloquent biting poetic social observation, expressed with a breathtaking clarity and natural authority which placed him firmly in an unsurpassed realm in which he had no equal. Perhaps Pavarotti can break a wine glass at sixty paces, maybe Bono can make girls wet their pants with a flick of his sweat laden hair , but for sheer mastery, panache, style and guts nobody could or can beat this guy. To get a bead on who he was, once he had recorded a song, he would never perform it again on stage, no matter how record company execs may plead.

Recently, however, he had ceased his endless harangue of politicians, big business, organised religion, the military, police etc (once, when running for President of Nigeria, he proclaimed that his first act upon being elected would be to enroll the entire population in the police force. Then, he said, “before a policeman could slap you he would have to think twice because you’re a policeman too?” The authorities ultimately refused to allow him to enter the race. Too bad.)

He now saw politics as distraction saying, “that our only task was to enter into contact with our own spirit, without which we would not survive?” His last years were spent in spiritual contemplation. He never left the house, except twice a week to go to the Shrine and play. He wouldn’t arrive until two in the morning. There would be fifteen hundred people waiting for him and he would finish at dawn.

And now he has gone. Aids they said. As far as I’m concerned it was one beating too many which had weakened his body sufficiently to allow disease to enter. He was a giant of a man, but a man nevertheless. The system can only take so much.

I went to his funeral. A hundred and fifty thousand people or so gathered in Tafawa Balewa Square to pay their last respects. Bands played, people queued endlessly to file past his glass coffin. We then ran with the coffin to a hearse (there were still thirty thousand people queuing up) to make the 20 kilometre journey to the Shrine where Fela’s children were to carry out a private ceremony for family and friends. In a cavalcade of vehicles we rode through Lagos City behind a band in the back of a pick-up truck playing Fela tunes. The road was thronged with tens of thousands of people, until we came to the brow of a hill. I looked down across the valley to the distant horizon. The road was filled with people from one side to the other and as far as the eye could see. A million people or more, and even more came as we passed through each neighborhood. Seven hours to cover 20 kilometres and the band never dropped a note. As we came nearer to Ikeja, we began to worry. What would happen when we reached Pepple Street, a small side street in which The Shrine was situated. How, in fact would we reach The Shrine with a million people in front of us? Night fell as we drew near. We turned in to Pepple Street. There was hardly anyone there. One million or more people had decided that it was not appropriate for them to be there.

The road was filled with people from one side to the other and as far as the eye could see. A million people or more, and even more came as we passed through each neighborhood. Seven hours to cover 20 kilometres and the band never dropped a note. As we came nearer to Ikeja, we began to worry. What would happen when we reached Pepple Street, a small side street in which The Shrine was situated. How, in fact would we reach The Shrine with a million people in front of us? Night fell as we drew near. We turned in to Pepple Street. There was hardly anyone there. One million or more people had decided that it was not appropriate for them to be there.

Fela was my friend for the past fifteen years. Our fourteen year working relationship had grown from that friendship. I regret his passing but celebrate his life. He will live forever through the incredible legacy of more than 50 albums of music which he has left us and through the love and respect of the millions of people who knew him, from near or far.

He was finally laid to rest in front of his house, Kalakuta, in Ikeja on the morning of Tuesday 12 August, 1997. His son, Femi, played a plaintive sax solo. A gentle rain fell; like perfume.

2 thoughts on “In Memory Of Fela”