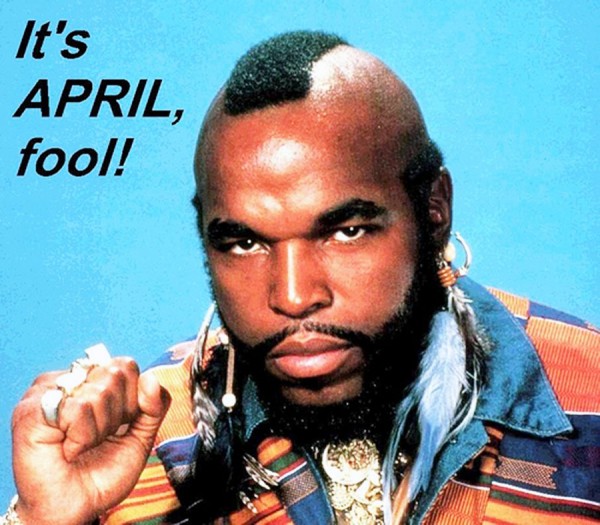 How is April Fools ’ Day still in vogue? It should have died a silent death alongside its peers, Guy Fawke Day, St. Patrick’s Day and Boxing Day that we now just call the 26th.

April Fool Day has been observed in Kenya for as long as I remember. It is not a public holiday but it refuses on pass on quietly. I can relate to scooting about playing harmless (annoying) pranks among friends for good laughs at other people’s expense. It was what mean kids did in school and you would hope that adults would grow out of it.  Planning elaborate pranks for April to amuse the kids can pass for 21st century-contemporary-digital-parenting but adults who go out of their way to scare, annoy or embarrass others in the pursuit of fun are a security risk. People have been killed for less in this country.

Pranks are healthy for fostering rebellion to authority in youngsters but kids should not be encouraged openly. A good prank involves getting away with no consequences. That is equivalent of telling the kids that naughtiness, mischievous and impish behaviour pays off. This is the motivation that drives kids we always suspected were up to no good, to grow up to become swindlers and smooth talking thugs in suits, flashing big titles.

My bourgeois friends will probably insist that practical jokes are good for one’s health and like the rest of the world, we need a calendar event to serve as a reminder to let loose and have a little fun. I get a bit weary of people who use phrases like ‘having fun” or ‘letting loose”. The kind who cannot have fun there was no one around to see them having fun. Or chaps who have to be completely toasted before they can ‘break loose”. We are morphing into a society I barely recognize, one step away from laughing yoga conventions. Then it is a rapid descent down the slippery slope to the National Hugging Day (An American creation celebrated on 21st of January.) and Happy April Fool’s Day festivities.

The only saving grace is that the commercialization of April Fools’ Day has proved tricky unlike Valentines’ day which now in observed in my village church as a Day of Red dresses. Advertising an event for the 1st April remains ill advised. Most people will dismiss it is as a hoax. Kenyan media especially need to give April Fool Day a wide berth.  I understand the tradition of running dubious stories on the 1st day of April for laughs however in a climate where readers think half your stories are dubious, lines can get blurry.

The media world carries its fair share of hoaxes, sensation, spin and pomposity. Advertising legalized it, politicians turned it into high paying career and the consumers got accustomed to suffering fools gladly.

No matter how obviously fake, a Fool’s Day joke is, it will always find a loyal constituent of believers. Some people are just born believers and the more paranormal the news, stronger their belief. To get a Kenyan conspiracy theorist all excited, just sprinkle some ‘illuminati” on it. I remember one headline story years ago about the discovery of a two headed lion in Tsavo. Outrageous as it were, the paper got inundated with calls from ‘curious wananchi’ who concluded that the whole affair had something to with devil worshippers.

The Origin of April Fool Day is hidden in the murky waters of European history and it has many competing stories of origin. There are only two stories that I find half way credible. The most popular one is drawn from 16th Century France. A new Georgian calendar came into usage decreed by Pope Gregory XIII to replace the old Julian calendar. The celebration of the first day of year moved from April 1st to January 1st. Some people flatly refused to change their schedules and continued with the April celebrations and they were called Fools for showing principle.

Another popular version regards the Fall of Grenada in 1492 marking the end of the 780 years of Moors dominion in the Iberia Peninsula which covered modern day Spain and Portugal. The Moors were Black Muslims from North Africa who fell for an elaborate deception plan in their final hour on the April 1st and got overran by the Christian army. The carnage was celebrated as the Fool’s Day.

April Fools only reinforces the fact that most of what is labelled as the truth is a pack of lies. The idea of liberated Africans hanging on to pointless medieval European customs with doggy beginnings is foolish. April Fool’s day, has no real legs to stand on but somehow it grown on us like a well-tended weave. Perhaps due to the familiar undertones of news stories that start out small and nonsensical and end up owning the stage.  Donald Trump began as a joke. Now he has got everyone including my 80 year old aunt in Asembo worried that he would start a world war if he became president.

Other than perpetuating a day of tomfoolery and increasing culture of foolhardiness in public office, the Fool’s day should be replaced with more worthy Kenyan historical event.