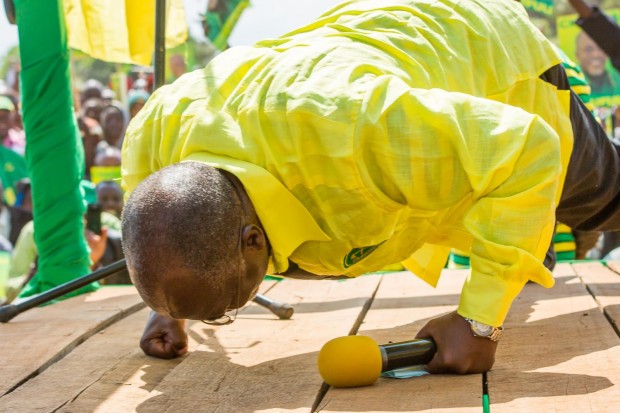 Kenyans have always arrogantly held claim as the torch bearers of East African progress. Our southern neighbour Tanzania was a nation that Kenyans berated for institutionalized lethargy, until, overnight, TZ got magufulified. Hardly a month after his election, the new president John Pombe Magufuli has emerged out of oblivion to global prominence with a simple message, “Hapa ni Kazi Tu”. Kenyans have been left puzzled. How now? Concerned citizens had pondered the question of our self-sanctioned state of underdevelopment for a long time. Analysts to the last man had all claimed that corruption was the ‘cancer’ devastating the country. I submit that corruption is merely the symptom. What really ails our beloved nation is our absolute and total dedication to the art of idleness!

We are a nation of professional idlers. Idleness is a leadership character flaw that permeates the entire populace. A national leader will spend a 5 year term busy at everything else but the work he was elected to do. A public servant given of a 100 day ultimatum to work on a project will go silent to re-emerge on the 102th day with a well bound report, crafted after 5 intense hours on a Sunday night detailing the necessity of a committee of experts to deliberate and correct the defective structures that prevented any conclusive work from getting done. A Kenyan worker will avoid a deadline by finding something else that is more pressing to do because you either have time or a deadline but you cannot have both.

Kenyans are naturally talented in idleness which must not be mistaken for laziness. It is simply not possible to embrace idleness unless one has plenty of work to do. To laze around requires no talent. We are not a nation of bums who loiter about aimlessly, kicking up dust, with our hands thrust deep into our pockets. In fact, to the average outsider, Kenyans appear incredibly busy. Nonetheless, we confuse appearing busy and getting work done as the same thing. Kenyans do not merely waste time because any average person can do that without too much effort. What makes idleness a special endowment is our ability to craft elaborate schemes, which require serious thought and planning to side-step all necessary work. Corruption is merely a convoluted way of evading elected work to take care of other pressing priorities.

When one requests a Kenyan governor to fill a pothole, the easy task would be to send off a lorry with bitumen to seal the hole. But a Kenyan governor would start with a seminar of stakeholders to deliberate on the issue where a joint feasibility study and investor conference would be proposed but only after a bench marking mission that takes his delegation on a round tour through Asia, Europe and America to return with a beautifully bound proposal that reads, “The solution to potholes, is an underground rail system and several investors have expressed interest”.

As a man of letters, I can speak at great length about idleness for it pretty much defines a great part of my ‘contemplation hours’. Doing other menial work to avoid creative work is an acquired skill many an artist typify. If I could write as often as I thought, planned and talked about writing, my career would have surely have panned out differently.

But idling is an incredibly enjoyable and fulfilling pursuit when one has plenty of work to do. Nothing epitomizes idleness better than an overpaid elected official who embarks on a strenuous campaign schedule pleading with voters to give them an opportunity to work for them only to spend the next five years after winning the election avoiding getting any meaningful work. When Pope Francis visited our country, the great debate was not over the Pontiff’s ability to cajole the country’s leadership towards correctness. The burning issue over the Pope’s visit was whether a public holiday would be declared, presenting a perfect opportunity, smack in the middle of a busy week to exercise our god given talent for idleness.

Like smokers who never miss an opportunity “to step out for a quick puff”, Kenyans can be incredibly creative in the art of wasting time. The internet is the idlers’ workshop and there is no great incentive for appearing to be busy than a google search box or a social media notification. In offices all over the country, Facebooking has evolved into such a concerted distraction where gifted idlers congregate to avoid making any effort at real work. The other idling zone is traffic jams, where Kenyans derive absolute pleasure admiring stationary vehicles.

It is plainly obvious that we are a nation of idlers. Instead of taxing our minds with endless debates on how to rid the country of corruption, appearing busy pondering over a problem we have no intention of solving, I would suggest, we stop the fretting, take a deep breath and ask, “What Would Magufuli Do?”

9 thoughts on “How To Magufulify A Nation Of Professional Idlers”