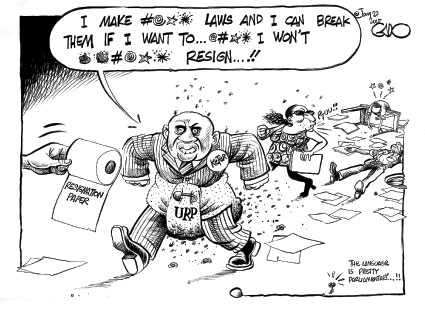 I was trying to get to grips with the land grabbing mafia spreading their tentacles all over the city’s public spaces and hoping to go beyond the tip of the ice berg that was the Langata Road Primary tear gassing episode. The brewing mysterious Singhs saga simply dissipated like a fart in the wind thanks to a well timed diversion. Abruptly, Nandi MP Alfred Keter barrels his way into the headlines, as any Kenyan socialite worth their hips would, with the good old classic rude outburst captured on amateur video. A public spat is the politicians’ equivalent of a socialites’ leaked nude pictures. Keter language was so explicit I was surprised the Youtube clip was aired without a warning. The MP blew a gasket, used colourful language and name dropped to emphasize the depths of the ignorance displayed by his offenders. How could mere police officers stand in the way of the government?  Who are these commoners who do not know people? Not to forget that he was addressing an officer in uniform. The average Kenyan is programmed to speak politely to authority, addressing them respectfully as ‘officer’ even when innocent. However, for a lawmaker on speed dial to Statehouse, laws are made to be broken. It served as a reminder, especially for those under the illusion that all animals in this kingdom are equal because the constitution says so. The highway to a functioning democracy is heavily tolled and lined with blah-blah.

Alfred Keter’s Gilgil weighbridge incident was another illustration of the disdain the political class have for the voting masses.  Even with overwhelming evidence of his abuse of privilege, all he had to do was sustain a position contrary to the truth on national TV because to be obtuse is a lot more honourable than apologizing in public for some very dishonourable statements uttered. Besides, he gets a slap on his wrist because he was genuinely ticked off and the blame for his mood squarely lies with the stubborn weighbridge officials.

A new standard of entitlement has taken root among elected officials lording it over anyone who stands in their way.  The political class operates by a different rule book. The system is skewed to favour the connected and privilege is either inherited or grabbed in this dispensation. In the rule book of power, the relationship between the exploiter and the exploited is tempered with pretense and good manners. When one is sniffing the rarefied air of leadership, skimming the fat off the land, enjoying the perks of privileged positions, it is usually good manners to pretend to care. Big corporates understand this. The products could be bad for the environment but no one raises a finger if you are known to give back to society. When the profit margins are steady, it is only good practice to share the crumbs off the high table. Indulge the masses regularly and people will consider one generous and socially responsible.

The smart politician is one who keeps his trap shut lest he puts his foot in it. Reserve your comments, be calm because the prejudice and contempt might just slip out and in this era of viral videos, one should never overestimate the public’s capacity to tolerate drivel.

The barons of power and privilege are unbecoming in behaviour.  Politicians are morphing into career proxies for lobbyists and their special interests when not banding up to devise new ways to screw tax payers. All this done under the banner of love and service of Kenyans. As long as one evokes, the pledge of loyalty to change lives by fighting corruption and the enemies of development on behalf of Kenyans, any fish story will do.