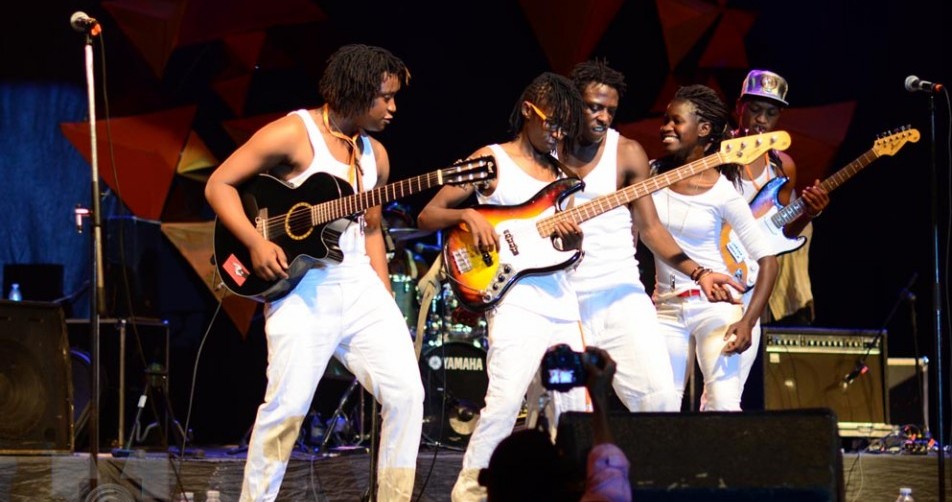 Film director Taye Balogun began a journey tracing the philosophy, history and fight-for-justice of the most conscious band in Kenya yet.

Sarabi’s music appeals to diverse social classes and they continue to draw attention and inspire whole populations living in abject poverty in Kenya.

Sarabi’s story is captured in a documentary aptly called Music Is Our Weapon, a metaphorical journey of this young vibrant band that believe that music is a weapon of CHANGE.

I was fortunate to watch Sarabi, the band at Choices Club in Nairobi in 2014. A friend of mine had invited us to Choices. He said there was a Kenyan band performing that would be worth my while.

It was my first time in Choices. I did not quite feel the place. There were a lot people and the place was stuffy so I decided to go sit away from the action. Where I was seated, there was a screen with a music video showing on mute. I was just watching this group perform and before it suddenly clicked that I was actually watching a live performance downstairs.

I could tell that lead singer, Mandela was literally angry for some reason. The song was obviously quite interesting because a lot of people were dancing to it. I remember that he looked very expressive. So my wife and I went down to watch them live. We went straight to the front of the stage and they got me.

I knew they got me. I never understood a thing because I do not speak Kiswahili but seeing these guys for the first time, not understanding a word or the message in the song did not stop me from feeling their energy. That was it.

It was a Thursday evening. I spent the whole of Friday talking about them. On Saturday, I was scheduled to be part of an exhibition for a project under the African Union theme, “Silence The Guns” with an attendance of delegates from 152 countries at Safari Park hotel in Nairobi. Speaking to the organizer and I asked what exactly he had planned for entertainment.

“Taye! You just saw these guys two days ago and you want them to perform? They are not even famous?”

He gave me some vague answer, “Maybe we could get the Safari Park in-house band”.

I insisted that this was the African Union! We needed a Pan African feel. He asked me who I had in mind and he went through the list from Sauti Sol, Eric Wanaina and I told him No! I am not talking about those guys. Then I told him about Sarabi.

“I saw these guys two days ago and I think you should bring them on board”.

And he said “Taye! You just saw these guys two days ago and you want them to perform? They are not even famous?”

I decided to give him a guarantee and assured him, “If you get them and you do not like them, I will pay you back your money”.

He said, he did not have much money but I negotiated and Sarabi came and performed and everyone went crazy about them. Even Safari Park staff said they nailed it.

The week after I called George who was their former manager and said I wanted to meet them. The rest of the team could not attend but he brought the band leader Mandela to Yaya centre. I wanted to know their story.

He told me about the humble beginnings in Mathare slum, a very emotional story, rising from the ghetto, from broken homes, the number times they had been arrested and how they formed the band.

As a filmmaker, their back story was compelling and I could see that it was a good story. I never revealed to him that I wanted to make their film but in the middle in the conversation, I declared that, “You have a fantastic story and I want the world to hear your story”.

Mandela was also very poetic and  passionate “We just want to change the world, our environment and use this music to give a voice to the voiceless”.

It reminded me of something Fela (Kuti) said in the documentary, Music is the Weapon directed by Stéphane Tchal-Gadjieff and Jean Jacques Flori ( 1982),

“Music in Africa can never be just for entertainment. Music is a tool for change. Music is our only weapon”.

That is how the title of the film came about. Coming from Nigeria, there are a lot of Fela wannabes, who studied his music and are active using the arts in activism but stumbling on Sarabi all the way in East Africa was almost magical. It was a precious find that needed to be shared with the rest of Africa and the world. 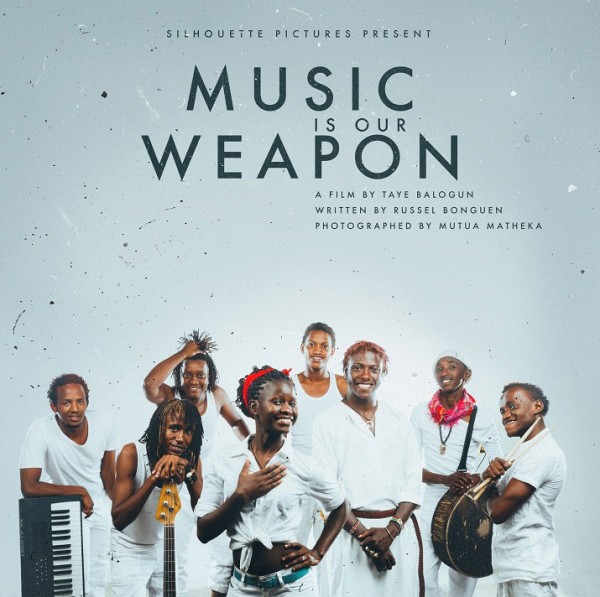 Sarabi is composed of Mandela, the lead singer, Bella, Kidum, Mbao, Adam, John, Tony and Aaron. Their style of music is different. Sarabi are basically activists masquerading as musicians. Aaron told me that the two worst things to be, are, an activist and a musician because you will never stop singing.

Their style is a fusion of many styles blended really well. They have a bit of everything, reggae, metallic rock, afro, RnB. It is music that is universal in its appeal.

I saw Sarabi performing at Roskilde in front of an almost exclusive white audience of 20,000 from Europe shouting and screaming.

MTV Europe listed them as the top 10 people to see at Roskilde festival in Denmark, which one of Europe’s largest musical extravaganzas.

These are the kind of stories we need in Africa at this moment. A true story of Africans arising. From the ghetto to gracing the international stage regardless of the challenges and their experience is genuine and authentic.

It is a story that inspires us to take a leap, challenge our leaders to avail opportunities for the oppressed youth in African slums and change the African narrative of helplessness. All we need is equal opportunities to compete. Mandela once called me said, “I just want to thank you”. I asked, “For what?

And he replied, “For telling our story” and I knew I could not disappoint them.

In 2008, Mandela, the charismatic lead singer of Sarabi band was arrested and jailed for his activism and opinions on justice and governance in Kenya. Mandela would be arrested again on February 13, 2014 when he joined a group of activists and musicians in a protest labeled the “Kenya we do not want”. He was armed with a guitar and his conviction. Music was his weapon.

Sarabi, is a slum rooted band that has emerged as a voice of the people, singing and talking about social malaise and taking up action to empower the slum populations through their songs with powerful lyrics and educational programs. They have undergone numerous struggles in pursuit of these ideals. Many of its members, were raised in broken homes. Street survival was a way of life, with no parents or guardians to fall back on when caught in between ruthless criminals and police brutality. They wanted to start a band but they couldn’t afford buying a guitar for themselves. That is now history.

Nonetheless, Sarabi band members live humble lives, deliberately dressed down almost as an act of defiance against the flamboyance that is pervasive in the music industry.  ‘We don’t need new clothes, we need clean clothes’ says their lead singer – Mandela.

Sarabi is not your average hype band. They sing what is deemed as ‘serious songs’ themed around social consciousness, human dignity, reality, and brotherhood. From very humble beginnings, Sarabi which means ‘The Mirage’ in Kiswahili is now a well known band with its sound traveling beyond Kenya. The band was nominated to perform in the Sauti Za Busara festival in Zanzibar in February 2015 and it marked an important step on their road to international recognition.

The Sarabi sound is blend of Afrofusion, African rock and a kind of pure homegrown reggae rhythm, which makes for unique, heart-tagging melodies that move feet, cure souls and enlighten the fans on relevant social matters. On the stage, performing, their sincerity and openness shines through. One can feel them giving their all, sharing soul and energy leaving the fans completely enthralled after a riveting theatrical performance.

These elements caught film director Taye Balogun’s attention. He began a journey tracing the philosophy, history and fight-for-justice of the most conscious band in Kenya yet. Sarabi’s music appeals to diverse social classes and they continue to draw attention and inspire those whole populations living in abject poverty in Kenya.

Music Is Our Weapon is a metaphorical journey of this young vibrant band that believe that music is a weapon of CHANGE.

Taye Balogun, an African film director born in Nigeria, living in Nairobi and taking African stories to the world.