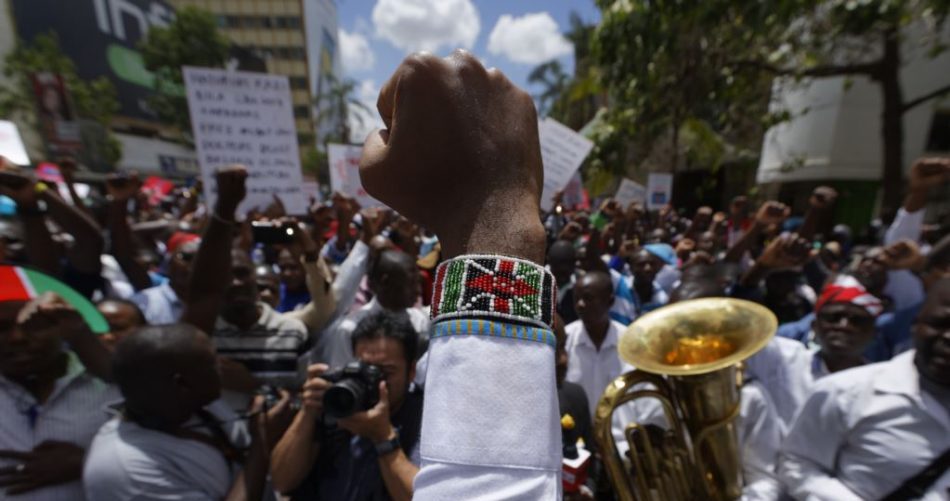 53 years since Kenya’s independence I have little to commemorate and nothing to celebrate. It bothers me the way we are glossing over the past with such aplomb yet in the present we have outgrown our national significance. We are yet to instill a national identity or a sense of national unity among the people living within our borders.

Functioning in a democracy requires more than marking a ballot every five years. It also requires an informed citizenry, knowledgeable about concepts of justice, notions of logic, approaches to problem-solving, ideals in child rearing, gender roles, values, morality and worldviews.

Kenya has sunk into a blind allegiance to a system, which has no recourse to any sort of higher human values.

Currently, time escapes us as we tip toe around the steps required for democracy such as unity, organization and investment of time. We have to change this mindset if we are to be serious about our development agenda. Long term projection and critical thinking are lacking. In the absence of nation building there is a fanatical adherence to borrowed religions that lack race-specific nutrients. Walking through the streets of Nairobi is akin to walking through a casualty ward of the human ego that has been decimated by power struggles and defeats. Our touted independence has resulted into a failure, unable to provide solace to rapacious souls that seek satisfaction.

We have a citizenry so inured in the sad ugliness of their lives that they do not realize their souls are rotting and their spirits are dying. We have evolved into a population that is multiply wounded. As a product of permanent stress the majority have lost their capacity to make decisions and plan for the future due to excess suffering encountered daily.

We continue to equate development to Westernization.

This struggle is an inevitable outcome of our past history of colonial disruption made worse by the inability of the Kenyan state to provide redress or even to seemingly appreciate the malady.

After 53 years our collective culture supports a ‘me-first?’ attitude and this selfishness is partly to blame for the state of the Kenya today. Central to this malaise is the mentalities with which most of us approach life and its challenges. We are to a large extent responsible for the choices we make. The root of indigenous suffering is due to the lack of meaning and identity. This profound loss of meaning and identity manifests in self-destructive behavior and pervasive social dysfunctions.

The unbridled amassing of public wealth by some citizens has reached a point clearly indicating a form of obsessive-compulsive psychiatric disorder.

This disruption to the socio-political system poses a threat for the entire country and is too pronounced to be ignored. Our current mantra touts “political patronage” as the glue of the system and “corruption” as the compensating mechanism for lack of legitimacy.

Many citizens are too willing to wallow in the blame game, to point accusing fingers at everyone but themselves. We continue to equate development to Westernization. For most Kenyans the definition of progress is trading our “Harambee spirit!’ for all things western. Our vision confuses skyscrapers and re-paved roads with development. Western manufactured goods in the markets are seen as progress. The imported cars clogging our tiny lanes are seen as success and most wish Kenya was more like the USA, Europe or the constant comparison of our non-performing Kenyan kitten to the Asian tigers.

How are we going to heal the country’s social wounds if we have not yet reflected on them?

There is no doubt about the technological and material superiority of the West. Its work ethic makes a man an industrious and a socially conscious citizen. Freedom for individual action under competitive circumstances brings out the best in him both for his benefit as well as that of society. The West got a head start with the industrial revolution. Generations of industrial activity and a commercial culture gave it enough time to build up the necessary infrastructure in all its aspects. Western citizens have had time to develop techniques and systems to support their economic structures and organizations.

As Kenyan’s before our aspirations get out of hand, we need to remember that they too had to learn from trial and error within a long gestation period. So in a way it is unavoidable for us to borrow from the West considering our colonial background aided the process. Sadly we also have to admit that the influence of Western style education and the undermining of our indigenous knowledge has given rise to a lot of prejudice and ignorance. It is not acknowledged that this accumulated wisdom could have any place in the management of commercial and industrial organizations.  Maybe it is time to look to the East for more applicable solutions. The prevailing issue is not about per capita incomes getting higher because there can be growth without development. Economic development has not been achieved because of the tribal nature type politics that we have adopted.

As a nation we are experiencing a major disconnect from reality. Much like children who want items but unaware of how items are obtained in the real world. Regrettably, almost all of Kenya’s post-independence reconstruction attempts whether through donors, aid or ideological have ignored focusing on overcoming the crisis of the psychologically depressed masses.

It appears that somehow it is forgotten that our culture can provide its own psychological approach to man, work and society. How are we going to heal the country’s social wounds if we have not yet reflected on them? Revitalizing and restoring values and worldviews based on traditions as well as contemporary realities through re-education is crucial. 53 years ago it was drilled into my generation that we could shape our destiny with a bit of this and a bit of that. The impetus rocketed us into uncharted territories with such ease that even the color bar of those days did not faze us. We were proud and solidly centered home grown Kenyans.

The Kenyan’s concern is not with an inner voyage of discovery of self despite our strong spiritual leanings. The problem is we focus too much on public roles and not on the private self.  Educated Kenyans are becoming uncomfortable outsiders, seeking to develop culture only in the directions that will give them stature of roles. Our relation to history has been reduced to a web of delicate ambiguities leaving us betwixt and between nothing. We have no vision of ourselves as autonomous independent agents and one wonders if we will ever transcend this state of mind and assimilate into the globalization we covert.

The dignity of a nation is created by sacrifice not glorified idleness.

I cannot blame the youth of Kenya for not having love for the country. Without knowing the glory of the country how can they love it? There is no provision in our educational system, which helps mold our children into caring and loving human beings ready to give more than they receive. We need, not merely highly qualified engineers, doctors and executives, they should also be men and women of character. The schools have turned out to be factories where parents and teachers systematically deny childhood and its joy’s to our children making them struggle for success. Of what use is gaining the whole world when a child has lost its soul. A child is a lamp to be lit not a vessel to be filled.

Imparting the right values of life to children of an impressionable age is essential. Our villages are lying empty as all the educated ones want to come to the city. They do not want to roll up their sleeves and do manual work. They no longer see it fit to speak our native languages. Students accept professions with a view to acquire wealth rather than to serve society. If everyone wants to sit in an A/C room, where is the nation? Who is to sweat for it? Wealth is created by sweat. The dignity of a nation is created by sacrifice not glorified idleness. It is squarely upon the shoulders of the younger generation to build their own future. Mental discipline and the proper frame of mind is the only way individual initiative and freedom can be realized. In the 60’s to the 70’s we reconstructed our thinking as a nation and embraced the diversity among us. Diversity adds beauty to society and allows greater functionality.

After 53 years we are living in an epoch of continual change. Newton’s scientific law “for every action there is a reaction which is equal and opposite’ is equally applicable. Change necessarily generates tensions and conflicts. To adjust and creatively meet the phenomenon at all levels and direct activity toward social and personal goals requires concerted action. Techniques and methods, theories and philosophies can never cure Kenyan’s completely of our diseases arising from our personality faults.

At 53 we have to be willing and ready to make slow and steady renunciation of the false and develop the true. Destiny does not work arbitrarily or punitively; there is a perfect sequence of causes, which have brought about the present situation.

I pray that our present government can effectively execute its plan irrespective of the challenges, which may sustain the already existing inequality. May the Harambee! Spirit of yester years live on in our beloved Kenya.

4 thoughts on “Guest Post: A Lament For My Country”