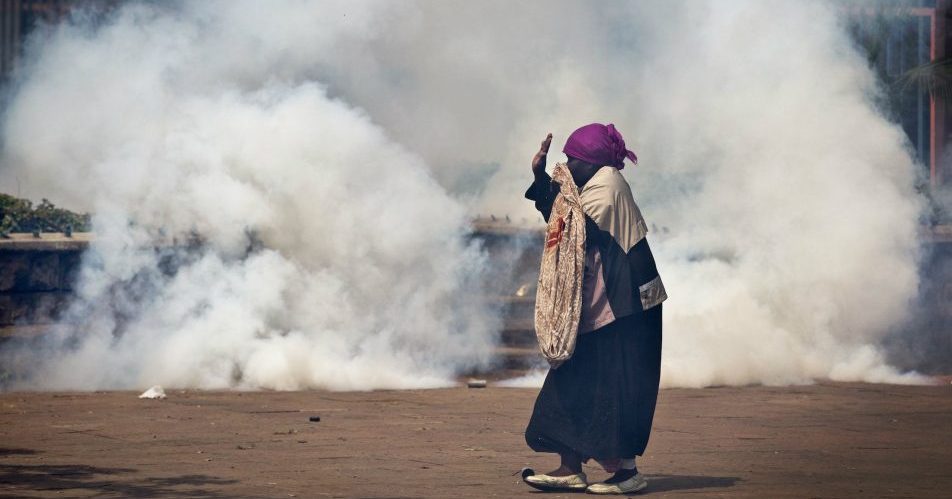 The running battles have been ongoing since 7am in the morning. Hundreds of protestors manage to keep the squads of anti riot police at bay with sling shots, stones and sheer numbers. It is a strange encounter with reckless courage. Hoze sees men jumping in the air to clutch tear gas canisters and “returning them to sender.” Others bare-chested with rocks in their hands daring police to shoot. Hoze learns to distinguish the blanks from live bullets. The live bullet has a distinct whizzing ring, different from the stunning blast of a blank bullet or a tear gas launcher.

At about 1pm, Hoze is exhausted, anxious and terrified.  He has received news of a mate studying at Maseno university who has died instantly after fatal shot. It is turning ugly and the police are resorting to live bullets in panic. To find safe ground he decides to head for the huge rock formations away from the highway and far from centre of chaos. One of his friends has hidden up there for it provides a great vantage point to monitor any approaching threats.  As he crosses the road, a land rover packed with policemen comes to a screeching halt about 50 metres away. A young corporal, shouts pointing in his direction and raising his firearm. Hoze has been spotted and sprints through the thicket with his heart in his mouth.

Gunshots increase in rapid succession. The air is pungent with smell of tear gas. It is a war zone. Hoze gets to the foot of two familiar gigantic rocks.  A large tree has grown seemingly out of rock between the immense formations. At the foot of the tree, covered by bush is a small opening enough for a grown man to crouch through that leads into a rock enclosure.  Hoze sneaks into it and crouches. He feels much safer but he worries about those left behind and scenes of death flash through his mind. Then he hears a distinctly different sound that makes the hairs on his back stand.

Hardly 6 metres away, where both rock formations meet to form a back wall is his worst nightmare possible. A female leopard with two cubs hidden behind its prone body growls, its eyes fierce and front fangs showing.  Hoze remains transfixed and his brain freezes. His instincts tell him to flee but his legs refuse to obey his mind. Outside, the gunshots are still ringing. He cannot take his eyes off the leopard but then he notices something. The leopard makes no attempt to move in his direction. The eyes of cats are murderous but the body language assumes a position of fright and it dawns on him. The leopard was also afraid and stunned by unusual occurrences of the day. It probably never encountered so many humans and continuous gunfire.

In that surreal moment, man and beast are joined together by fear of a threat bigger than themselves.  Hoze cannot understand how he has managed to summon the courage to sit so close to death but he finds himself uncharacteristically calm. As soon as there is a lull in the gun fire, he steps out of the cave into the blazing sun of the early afternoon. Something changes in Hoze. The threats are far from over and he is still fearful but he is also bold in his determination to survive that day.

Life is bound to test us in ways we can never fathom and overwhelm us in a moment however in an instance, a man must make a decision. It is natural to be afraid but still one must act even when their hands shakes and their voices tremble. Courage is that corner stone virtue that defines the character of men. It is a halfway house between fear and recklessness. It is not the absence of fear or the consequences of danger for that would imply insanity. Courage is the heart refusing to be overwhelmed by fear.

On January 30th 2018, an opportunity to display courage under difficulty circumstances was presented. NASA principals Kalonzo Musyoka, Musalia Mudavadi and Moses Wetangula buckled and only Raila Odinga had the courage to stand alone for his political convictions and truth. The simple lesson from that swearing ceremony was that courage and comfort can never be friends.