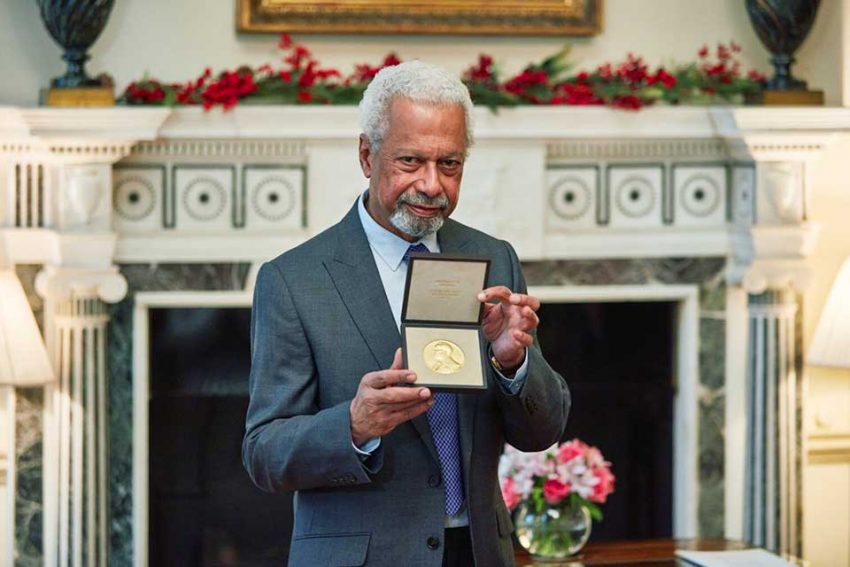 Books come into your life for a reason. My first encounter with By the Sea was seven years ago. I got roped into a biographical research exercise conducted by my sister. We started by reading widely to see how African writers spoke to contemporary times. Among the books recommended for background reading was Abdulrazak Gurnah’s novel By the Sea.

What uniquely characterized it from the other books in the list, was the author’s origin, Zanzibar!

Even as an East African, I was not acquainted with writers from Unguja.

I vividly remember its cover. A picture, a partial shot of a narrow alleyway, the paving eroded and returned to soil, the walls cracked and chipped and long afternoon shadows forming on it. Across the narrow road from the alleyway, the hint of an old door with folding hinges, green paint faded and peeling off. A familiarly comfortable visual.

If someone were to ask, how I became acquainted with Swahili and Islamic culture, I would start with the story of my origins and this book reminded me that I was a product of a cosmopolitan East African heritage. By the Sea, filled in the blanks of a story I already knew.

I had seen scenes reminiscent of that door and alleyway in the old towns of Lamu (Amu Island) and Mombasa along the coast of the Indian Ocean Swahili towns in Kenya. I had also seen the same doors and narrow corridors, 700 kilometers across the country by the shores of Lake Victoria, in Manyatta Arab in Kisumu. They also reminded me of the roadside Indian dukas in Yala township in Western Kenya, along the Busia highway to Uganda.

My grandparents were influenced by this culture. In our rural home, my grandfather owned ornate furniture fashioned in the Swahili style. It was not until being accustomed to the Kenyan coast did I realize the origin of his influences. The wooden trunks with rope handles fastened with a padlock, held treasures and Kiswahili books. My grandfather even included a baraza in his house design, a stone platform in front of the house where guests could sit, informally. When I began visiting the Kenyan coast, I saw barazas everywhere and I began to understand where my grandfather drew his influences from and why he occasionally would resort to cursing in Kiswahili when he was annoyed.

I began reading By the Sea but got distracted and was not able to complete it. I retained a copy of the book, promising that I would one day eventually get to it and the years just flew by.

I would return to By the Sea, while settling in another city by the sea in Europe and I found I resonated with his main character Saleh Omar. When I moved to live and work from Nairobi to Amsterdam, I also felt upended and I carefully selected a number of books that embodied the spirit of home. By the Sea was one of them.

As the COVID pandemic swept through Europe, I started reading it again and the cover transported me back to a different time and place. A place suffused with smells, textures, colour and melting sounds. I thought I might be like those art enthusiasts I see at photography exhibitions, immersing oneself into a world of familiar allegorical symbols.

In my schooling days, I went to the Kenyan coast as a domestic tourist but when I had family living there, I started visiting and staying for long stretches and began to see coastal towns from the perspective of the natives. On Amu island in Lamu district, the old town by the Swahili seas, was the first time I lived in a place where Islam was culturally dominant and found myself adjusting to the rhythms of one of the most influential Islamic centres in East Africa.

I stopped looking at the town as a historical monument, a recently recognized world heritage site but as a coastal settlement that has been continuously inhabited since the 12th Century and the product of an evolving 700 year living history.

One evening, as I was scrolling through my Twitter feed, I saw an announcement about the Nobel Literature Prize. I recognised the name of the winner and started to look through the bookshelf and indeed, I thought with a smile, it was the great griot from Zanzibar, mwalimu Abdulrazak Gurnah.

When I read a good book, some passages linger in my thoughts and become stubborn. They demand attention. I came across many lucid passages in the novel By the Sea. Abdulrazak Gurnah who was born in Zanzibar was a product of a shared history, when the Omani’s reigned in Eastern Africa and exerted their influence inland to our great lakes.

Abdulrazak gives value to the significance of our personal journeys, no matter how small or fringe. Much like the character Latif Mahmud in the novel, I found my own family history intertwined in this East African story, that was previously dictated by the currents of the monsoon winds, only to be disrupted and dispersed during the European colonial encounter and resettled in new lands, a generation later.

In this sense, Abdulrazak’s book, By the Sea, serves as a companion in a new location, where you feel as though you are at the beginning of a new story. Though the book plays out between Zanzibar and a small town by the sea in the UK, I feel the dislocation of the main character Saleh Omar, who arrives at Gatwick airport as an old man seeking asylum, and I begin to wonder why an old person would leave home. I resonate with the character’s dilemma and why he turns to religion to find meaning. Islam as a religion is notably contextual.

I was living in a big city by the North Sea, coming to this part of the world as an older man, who had seen the world and like Saleh Omar, I had arrived jaded and burdened by ambivalent feelings towards a new country.

Abdulrazak reveals the nuances of the African experience in the way his characters talk about other Africans. He challenges the dominant simplistic imagery of African asylum seekers and refugees and shatters labels that are conveniently applied to mask their humanity. He confronts, especially in the midst of Europe’s migrant crisis, the popular portrayals of the asylum seeker and why we immediately think of people of colour.

I am reminded of a recent street exhibition in the city of Maastricht in the Netherlands, a campaign against profiling using a picture of a person of foreign descent and asking the simple question:  expat or migrant? It is a question you never need to ask in the Global South, where development aid is a lucrative industry.

History, past and contemporary, shows the movement of Europeans all over the world for the very same reasons that the people of the Southern hemispheres are presently accused of.

Gurnah speaks to the universal sophistication of the African people but not through the standard frame of Europe. Instead, he outlines the roots of this cosmopolitanism drawing on 1000 years of history. He describes the experience of newness using visuals that are grounded in an East African heritage. Not enough is said about the refinement of African living and of the culture shock of coming to Europe to meet pronounced backwardness that can be jarring, despite the overt symbols of material prosperity.

Many have forgotten that it was the sophistication of East African coastal cultures that drew Europe to its city states during their golden ages, and their contribution to the world before they were attacked, plundered and reduced to mere tourist sites and historical old cities.

Abdulrazak also points out another important distinction of several African migrants emphasizing the challenge of adjustment to trans cultural encounters and how these encounters amplify longing, not helplessness as victims. It is this cosmopolitanism that allows the African to navigate Europe through unlikely avenues, such as food and music.

Abdulrazak’s characters speak of places left behind out of longing. They carry personal items in their travels as functional memorabilia, seen in other lands as strange bits of wood that are only valued as beautiful things to be seized and displayed as trophies.

The passage on the pilfering of Saleh Omar’s incense box, his most prized possession, is a pointer that many Africans leave behind rich lives and come to Europe as an act of desperation. The incense is Saleh Omar’s last memory of the rich life he forfeits, coming from a world where everyday lives are dictated by scents. The sophistication of the connection goes beyond the immigration officials’ pedestrian existence, and shows the clear value distinction just by simply showing what others value. He pinpoints the crass nature and subtleties of supremacy by the immigration official who has no clue of the psychological value of the incense he impounds.

Gurnah challenges the reader to glimpse at how adaptive African immigrants are and that their cultures are not static but constantly evolving as dictated by circumstance. He explores nuances of social life, the mores that govern behaviour and how transgressions are addressed and justice realized.

In the end he leaves us with a map and as his lead character narrates,

‘I speak to maps. And sometimes they say something back to me. This is not as strange as it sounds, nor is it an unheard-of thing. Before maps the world was limitless.’

And with this, the opportunity to map out new worlds that value humanness.

3 thoughts on “Finding My Own Story – By The Sea.”