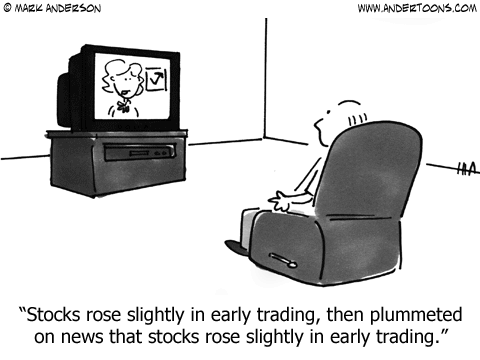 I watch business fairly regularly however if I was ever subjected to a quick quiz afterwards, I probably come across as shockingly ignorant. I barely fathom the analyses pronounced with a finality that makes one feel impoverished and illiterate. Stuff about entities whose abbreviations bombard us daily.  If you were never great at figures and dreaded maths in school, business news always sounds complex.

The only balm to this dilemma has been the very distracting female newscasters. While most male newscasters are fairly conservative, opting for the standard grey suit, some female readers can get quite edgy for news reading. This reminds me of weather girls of the old. Most of men won’t admit it readily, but many are guilty of spending too much staring at the weather girl and hardly any attention to what she says about the state of the sky outside. Weather girls like business news readers tend to strut across the screen greatly increasing viewing options. With fashion rules gone rampant one is assured of a healthy dosage of viewings as cleavages are popping everywhere and hips tightly trussed on our screens. On many occasions, the only question in my mind, “Aren’t those trousers a little too tight?” Luckily sports cuts in and plunks us out of a possible fixation. No wonder we never remember what the business news was about. Yet we remember what the newscaster was wearing.

I think limitation on flesh exposed should be mandated for on air jobs. Female newscaster cannot be overdone.  Putting sensuality on a pedestal I suppose is the only way to get, the rest of us outside the financial industry to watch business news.  We sit through the rambling like obedient students taking a compulsory civic education class. To the outsider, we may appear to be listening keenly but most of the time is it the newscaster dress sense that is under scrutiny.  We treat business news as a form of gibberish we have to endure while waiting for sports.