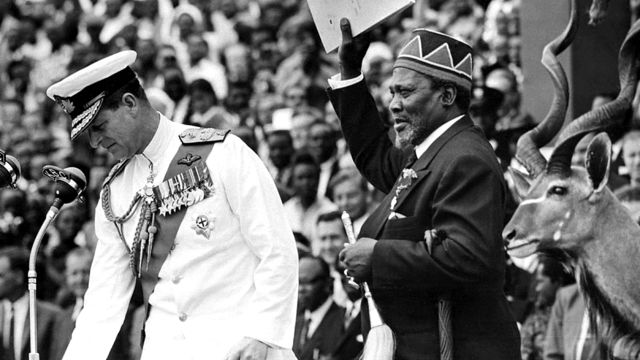 As we settle into Kenya’s golden jubilee year, Oyunga Pala reflects on the journey Kenyans have undertaken since independence and considers how this has set us up for the next 50 years.

My eldest sister is fond of bragging; she was born in British East Africa,long before Kenya became a nation stemming from a generation of Kenyans fondly referred to as Matunda ya Uhuru (The fruits of independence). These were the children born just before or right after independence.

This was the 60s. Kenya had just been liberated from the yokes of imperialist British rule and promise for a great future reigned. Finally the natives could strut in their own land as free Africans. British East Africa was no more and the new nation Kenya was the rising star of East Africa. Our founding President, Jomo Kenyatta was akin to a great liberator he planted in the nations’ mentality, that in the new Kenya with hardwork and unity anything was possible. Harambee, pooling together became a national slogan goading us on the power of self reliance and unity. Under the flag of Kenya, all ethnic groupings were perceived as one.

My siblings went overseas because that is where successful Kenyans sent their kids for specialized studies. Foreign education was not about getting a good paid job. It was about coming back to Kenya with new skills to be applied for the improvement of all Kenyans. There was a general sense of belonging to this group of very superior Africans collectively known as Kenya. In those days the name Kenya evoked respect from many other nationals especially those from African countries. To be from Nairobi was a big deal, the Franco-phone Africans referred to it as the Paris of Africa.

When I came of age twenty years later my Kenyan experience was very different. The incumbent Daniel Arap Moi, the old man we loved for he gave free school milk and liked children, turned out to be a dictator who made people disappear. The police morphed into a dreaded force, reducing vibrant Kenyans to scared citizens who learned to stay out of trouble by being subservient. The important thing was survival in this hostile climate. Those who were lucky escaped abroad, where tolerance and opportunities existed. Home had become a place synonymous with suffering, the ultimate privilege was to get out.

In school, patriotism was systemically enforced by chanting the loyalty pledge. Every morning in the school parade we mandatorily belted out the national anthem, appearing patriotic and proud of our flag. But at home, I heard whispers about how the Moi government had carried on with Kenyatta’s isolation policy of Luo Nyanza. I may have had friends from every ethnic group at school but at home, I faced the reality that as a Luo my chances of success in the new Kenya would be limited because of the opposition stance of my father’s generation. Democracy not yet! It was Not Yet Uhuru for us. Agitation for democracy had cost us and if we learnt to bow down to authority, our lives would be a lot smoother.

By the 90s, economics of the land had changed. Parents could no longer afford to send children abroad. My siblings overseas, had not returned and they showed no signs of coming back. To survive at home, you had to forcefully abide by the new systems. But towards the late 90s, the mood started to change and we sensed a big happening. Kenyans finally united against the tyranny of the Moi regime and life drastically about turned under the united opposition.

The agitation for change brought about a new political status quo and the wave that rode Mwai Kibaki into power. Subdued Kenya reared its head, internet sprouted; suddenly we could compete and had access to new information. Several platforms of expression mushroomed, the future was at hand. Sadly consumerism increased and economic gaps widened. That elusive prosperity promised still did not trickle down and disenchantment rose. We resumed the same old script of the ruling elite versus the rest.

It culminated in the 2007 election blow out, Kenya exploded; political stakes became synonymous with grabbing opportunity. Walking through the heavily cordoned Uhuru park in the midst of the tension, my fear of authority surfaced. As my sister back from a long sojourn abroad, calmly took pictures, identifying with the armed police as fellow suffering Kenyans. The generational difference was evident. She grew up in a Kenya where they were not afraid of authority whereas I had learnt the hard way not to look let alone ask police funny questions.

Despite the clashes Kenyan reliance shone through. We woke up from our tribal stupor. Everyone needed to behave because it was interfering with our way of life. But the hate was intangible leaving a lingering grudge. With Obama’s election in 2008 a ray of the Kenyan sense of destiny briefly shone through. Obama’s grandmother lives in Siaya county where I hail from and the pride of being a Kenyan, the sense of entitlement was full blown. Somehow despite our latent strength, we could not change our political narrative.

The 2013 elections positioned us once again toward the cusp of change.

I am cautiously optimistic. 10 years ago, my dreams for Kenya were simply for infrastructure and a functioning society. Something akin to the Dubai evolution from the sands. Europe is currently depressed; USA is in turmoil despite having a smart Kenyan in charge.  I know now that the future is in Africa. School taught me that my country was an agricultural country. We apparently farmed high valued cash crops and I always imagined how export quality tea or coffee tasted. It took Java house to educate us.

Monuments to consumerism now abound and most have cars clogging tiny lanes. Our habits have changed. We dance to salsa, eat sushi and shop online. The tribalism script still reigns but in reality the real divide is between the classes. The city has evolved into distinctive enclaves worlds apart. The rural areas relegated once more to reserves. Nation building has become one big cosmetic uplift.

After the super highways, we should get back to the business of finding our souls. We crave economically gains and have resources to achieve the quest of prosperity. But I look around and people are not happy. IDPs languish in the camps 6 years later forgotten. The class divide is so large its a chasm unbridgeable. 50 years later this is home. A land of contrasts that meanders and like a river it always comes back on course ebbing and flowing through generations.

This article was originally published in Kenya Yetu- May 2013 edition.