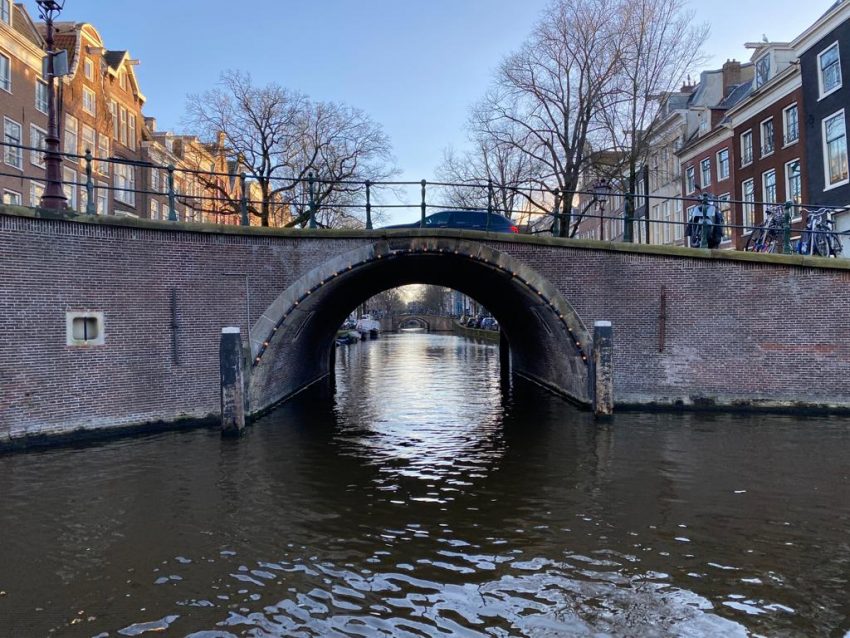 Just so you know…we are supposed to be on a boat.

On this day, a good friend invites me for a boat ride.

Friday at 2.30 pm. We leave the rendezvous point on the West side of the city of Amsterdam. Two black men stride through the streets with urgency, the taller man a step ahead. It is a 15-minute walk to the point where we are to board the boat. I struggle to keep up with the pace but we cannot afford to be the guests that don’t keep time.

There are five of us – the Moroccans, two brothers, one from Casablanca, the tourist, visiting his brother who is a long-time resident in Amsterdam. There is the friend, a proud black man, a poet and an author from Charleston, South Carolina who lived in Amsterdam since the days of the Warsaw Pact. The skipper, a Dutch man, who I shall tell you about later and myself.

They are a bubbly bunch, the Moroccan brothers. They laugh and crack jokes constantly. They start every conversation with, “My friend!” and thus strangers become instant friends after a handshake.

I feel compelled to show African solidarity, so I eagerly share  my general knowledge on Morocco; Rabat, the Atlas mountains, a distant memory of King Hassan II while trying to recall a great Moroccan footballer but none comes to mind fast enough. They do not seem impressed by my efforts and the conversation moves on to Casablanca, the largest city in Morocco that borders the Atlantic ocean.

Have you been? Do you know? You must come.

I really should have asked them to tell me about it? But instead I squander the opportunity by bringing up the famous 1942 movie, Casablanca starring Humphrey Bogart. I hadn’t realized until then, that I was holding on to the romanticized version of their lived reality.

It is a spacious open boat with no cover from the Bulldog brand in Amsterdam. The skipper, a local man, has a name that is easy to remember. Nick. He ushers us in with a set of instructions.

Use the seats. Don’t sit on the edge of the boat or lean over. I notice that there are no life jackets handed out and refrain from asking how deep the waters are because I suspect the Moroccans would find a way to roast me. The skipper speaks with purpose as he shares the planned cruise route and adds, to my relief, that there would be a bathroom break at the Bulldog lounge.

It is a promising Friday. The wintry weather has let up for a moment and we are treated to blue skies with spots of brilliant white puffy clouds and sunlight through the day. You learn not to waste a day of good weather in these cold and wet flatlands. Nonetheless, we are layered up under our winter jackets and cradling our drinks along because it is still chilly on the water.

The skipper unties the thick anchor rope and the boat drifts gently from the paved embarkment to the center of the waterway. A motley crew of multicultural people, as they would politely describe our shades in Amsterdam, go cruising down a river.

Is this the Amstel river?

The captain shakes his head and says we will be on the Amstel soon.

Amstel is not just a famous beer, but a river that inspired a nation. Amsterdam derives its name from the river. It emerged as a small fishing village in the 13th century where a dam was built on the Amstel and named Amstel-dam and that eventually became Amsterdam.

The skipper is not a tall man but he stands tall, as he steers the boat through the first of a series of arch bridges that have a low clearance. I notice that his chin juts upwards periodically as though it helps him see further. The boat has enough space to seat twenty more people but we have it to ourselves and it’s not long before we are influenced by the animated tourist from Casablanca who is live on Instagram.

We are all feeling jolly and the exuberance shows. The music has gotten louder and our voices many decibels higher. We now are waving at total strangers walking on the streets or sitting on the pavement cafes by the canals. Anyone who so much as darts us a glance, receives a hearty greeting. We pass real tourists in a large covered tour boat and they don’t seem happy behind the glass. Our phones are out most of the time, trying to record scene after scene, of a city built on water.

Nick talks in bursts throughout the cruise, identifying historic landmarks from a different era.

A few names are familiar but most just sound like unintelligible Dutch words to my ears and I have difficulty getting my bearings even though I have walked and cycled through many parts of the city that we are cruising past.

Nick includes random background stories about sights we come across.

Do you know why we call this one the Kardashian?

We are cruising past a row of houseboats on the water and one appears to be covered by a low rusty brown roof shaped like a human trunk in a prone position. I am slow to catch the joke. It is a shapely roof.

Nick points again. There is probably a scantily dressed sex worker behind the red lit window but despite the squinting, we are too far away to see anything of it.

He suddenly turns into a poet,  with one hand sweeping across the expanse of waters around us.

There are three ways to see Amsterdam, from the streets, at night and from the water.

Most of the time he is mute, his eyes scanning the environment, allowing his passengers to sink back into the tranquility of a river cruise, the rhythm lulls us into moments of silence where we are able to observe the water streams trailing the boat, noticing the mundane, a single blue Albert Heijn supermarket bag drifting in the water, a majestic white swan dipping its long neck or ducks feeding on what I suspect is stale bread tossed away by someone’s grandmother.

We cruise in straight lines parallel to the streets, mostly squished in between tightly packed blocks of houses and under bridge, after bridge.

I have seen Amsterdam from the street on a bicycle saddle. I have been out in the illuminated city centre for the winter lights festival. The water, surprisingly, was a late port of call.

A boat cruise on the canal ring is a great way to appreciate the ingenuity of the Dutch water management tradition. It is the birthplace of a port city emerging in the late 16th century that responded to the increasing population and housing shortage by finding a way to reclaim land from the water.

The city grew out of a network of canals following semi circle rings with waterways and streets that are interconnected. There are houses built on the reclaimed land from the 17th century still stand in historic glory.

Amsterdam has spruced up well since. The canals were not always clean. Kenyan novelist Yvonne Adhiambo Owuor described the sledge of a struggling river that she encountered during her first trip to Europe.  The waterways used to be once open sewers filled with litter and stench. Tourists would frequently urinate in them. Today, if the police catch you, the penalty is a 140 Euros.

The canal ring district contains some of the grandest and most expensive properties in the city and where the one percenters live. From the water, you get a fuller appreciation of the historical heritage of the city, the narrow buildings, storied houses, with long windows, pitched roofs and elaborate facades. The past and the present stand side by side.

Some houses appear to lean forward and some look crooked as if sinking under their own weight and when I ask Nick about it, he assures me there are. I wait for an explanation but none is forthcoming.

Nick announces that he is approaching the Bulldog lounge and perks up as he shares the story of its founder. The Bulldog holds the claim of Amsterdam’s first coffee shop and also the catalyst of its coffee shop culture, attributed to the resilience of its maverick founder, Henk de Vries. Nick tells the story of an underdog, harassed by the police, profiled by the state, who through tenacity and charisma, built a case for the legitimacy of the Dutch coffee shop culture.

The original coffee shop started in 1974 still stands. I walk into the lounge, past the long bar to the toilets in the back, the unmistakable smell of marijuana wafting through the brown wooden paneled interiors that reek of nostalgia and continues to draw hordes of recreational cannabis users of every nationality.

From there, we continue cruising and Nick once again retreats into silence that is only shattered by the American who starts clapping and pepping up the skipper as we approach a set of bridges. Nick had timed the sunset perfectly or maybe, he was just lucky. Either way, he responds with a somewhat shy, beaming face.

The sun is setting in our path, shimmering on the water, hues of yellow and orange cover the sky sending a stream of light through the arches at the Reguliersgracht canal that connects to Herengracht, Keizersgracht and Prinsengracht.

The American says the point is known as the Seven bridges and indeed when I look through, I see a series of arch bridges stretching out in the distance in perfect symmetry.

As Langston Hughes wrote in the poem the Negro Speaks of Rivers, I have also known rivers, old rivers, long rivers, wide ones too. I have swum uninhibited in the rapids of the Yala river in Kenya, gone white water rafting down the falls on the Nile in Jinja, Uganda and camped on the banks of the expansive Mekong river in Laos as I watched Laotians place floating lanterns gently on the water surface during the festival of lights.

Yet through all my travels, I have never have encountered a river that was completely tamed and colonized.

We have been in the water for two hours and the temperatures have dropped. The gloves are on. There is the typical fidgeting of middle aged men in desperate need of a bathroom. Nick docks and we form a beeline to a bar tucked in the corner of a street.

Inside by the bar counter as we settle in, an elderly Dutch man in glasses with a white chin goatee appears and sits next to me striking up a conversation. Turns out, he is also a published poet and his book is on the glass display behind the counter. He buys us a drink and after some prodding on our part, proceeds to read his poem, first in Dutch and then he painstakingly translates,

The bird digs the earth in search of beetles and worms,

The bird gnaws off the bones that still lay there without a grave,

He reads with a quivering voice and apologises for his fluency in the English language which I find unnecessary. After he finishes reading, he waits as though expecting me to say something clever. I feel the desire for this encounter to be meaningful. After all, I had just travelled down a river with a poet and met another at the end of the trip in a bar.

Instead, I share a simple compliment as the two poets begin to analyse the poem.

I listen as they talk eagerly to one another and in a strange way, I feel my soul has grown deeper, like a river.