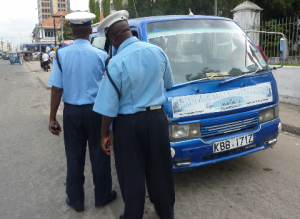 When driving on Kenyan roads, the biggest hazard is not suddenly emerging potholes but traffic police men. Most Kenyan drivers won’t readily admit to bribery charge unless they are matatu drivers but most of us, if asked politely will confess that we made a contribution to the police fund. So it comes as no surprise that the Inspector General Kimaiyo was quoted pleading with the public not to bribe his officers. He was probably reacting to the latest Transparency International Report that placed Kenya in prominent fourth position in a worldwide list of countries where bribery is rampant. Apparently 70 percent of those surveyed in Kenya reported to have given a bribe. If they had bothered to survey Kenyan drivers, the percent would have been closer to 90. It is not something to be proud of but we live in a country that where institutionalized corruption is a way of life.

Kenyan traffic cops are so wired to receiving bribes that even when there is nothing wrong with your vehicle or road manner, they still hover over your window giving you that, “hata ka chai’ look. Those who drive newly manufactured cars hardly ever notice the traffic police because they rarely get flagged down.  But for those who drive cars manufactured before the year 2000, pickup trucks or a Probox, regular incidences of vehicle profiling by traffic police becomes part of the driving experience. It does not matter whether the car has fault or not. Traffic police are masters of vehicle forensics and even when you think your car is road worthy they will find something wrong.

Few people are as resourceful as a traffic police building up a case for a bribe. The general tactic is to make the incidence frustratingly inconveniencing until the stubborn driver finally relents and agrees to ‘talk’. If the car, by some rare miracle happens to be in tip top shape despite the rigorous road side inspection, the adamant cop will still reach for the final straw and demand to see your first aid box. It is hopeless arguing about your rights or memorizing the traffic act. It is must easier to plead ignorance and ask for forgiveness.

Brand new car owners will probably remind me of my constitutional rights but years of regular intimidation by traffic police men threatening to haul my vehicle to a police yard for imagined and minor traffic offenses have left me subservient around traffic police men.

Even since I started driving over a decade ago, I learnt to adopt as a certain submissive demeanour whenever I met traffic police manning road blocks ( read toll stations) across the country. I would always open up with a greeting, “Habari ya Ofisa ( Hello Officer)”. My window would also be wound down, driving license within reach and hazard lights blinking. If you own an old car, you must be used to the routine. You can always tell when a cop is a bad mood and you just happen to be the driver paying for the matatu that got away. Expired vehicle insurance papers and driving licenses are non negotiable. You better hope you have some change or one is in for lot of inconvenience. Using your cellphone while driving is an instant fine. Bald tires and broken taillights allow room for haggling and mostly you can get away with a strong warning for not wearing a safety belt.

The endemic bribery practice in the police force is systemic and if the Inspector general wants to be taken seriously, he ought to start at the top. The cops on the beat are just following the lead set from above.

1 thought on “Bribes Are Business As Usual On Kenyan Roads”