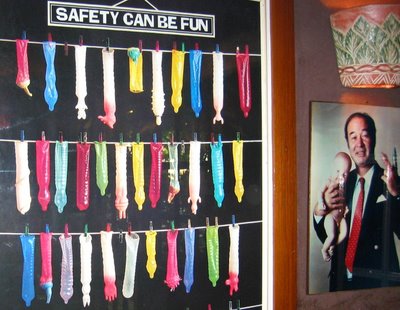 I popped into the supermarket for some early night shopping on a Sunday. I had to stock up on a few basics items; A bottle of rum, lemons, airtime for the cell-phone, toilet paper and some condoms. I did not even bother to use a shopping basket. I picked the items and walked towards the cashier counters where the condoms are usually displayed. But when I got to the express counter, the queue was longer than regular counters.

I scooted across looking for the counter with the shortest line and a condom rack in sight.  I stepped into one. Standing in front of me was a young mother with a playful toddler. As I inched closer, I admired the young mother’s ability to multitask. Talking into a phone, reaching for her smart card, removing items from her cart and keeping an eye out for her baby simultaneously. The child with the flashing squeaky shoes did not pay any attention to me until I grabbed a handful of condoms. In a moment’s notice I was at the centre of his attention. He stretched out his small hand demanding what I held in mine; the pack of condoms.

I made some funny faces to distract him as I moved the hand away from his line of sight. However this tot who was used to getting what he wanted for he decided to follow my hand. Luckily, the mother spanned around in time to distract the persistent child. But the heat was not over.

Right behind me was a woman old enough to be my mother. She was the caricature god fearing old lady with a long dress with floral patterns, a headscarf, flat shoes and thick spectacles. Her body language was icy. I thought I saw what looked like a sneer at the corner of her mouth. I could not help but wonder what was going through her mind. I was next in line at the cashiers. I tried to bunch all my items together, laboring to place the condoms in a way that they did not draw too much attention. The older woman did not say anything but her expression told volumes. The young mother who had just being served shot back a glance at my purchases, then seemed to be in a hurry to leave the supermarket. The cashier made minimal facial contact. The shopping assistant packed the condoms in a secure smaller bag, knotted and placed them at the corner of the larger bag as though contact with other items would lead to contamination. I felt like a debauchee.

I must say the creative brains behind labeling in the condom industry have thoroughly let us down. Branding of johnnies tends to lean towards the cheesy. They come in glossy and luminous coloured packs. The brand names are either tacky or risqué. The picture of glistening body part or love heart prominently displayed at the front of pack makes one think more of sleaze than protection. In addition, I fail to understand why discrete deliveries are not a basic service standard in our conservative environment.

I may hold liberal views in matters of sex. I may resist the notion that religious institutions, the government or the public should not regulate my sex life just as they regulate my power supply. Even so, I am not immune from the omnipresent scrutiny from the moral police in public places where contraceptives are purchased. The dispensers in the night-clubs might as well have ‘quickie supply’ written on them. Which is why, I find a pharmacy proves to be a more socially appropriate setting for rubber sourcing. They open late and that adds a touch of the discretion. One can also duck under the umbrella of the doctor’s recommendation.

I should not have felt uncomfortable but I did. Condoms still languish in the immoral-behaviour-enabler category. Nearly 30 years since the advent of AIDS awareness campaigns, condom purchase ought be routine as buying airtime. It is not case. A packet of cigarettes gets more leverage over a packet of condoms in a public court of disapproval.

The hypocrisy is silly though. People are having sex and a large fraction of that action is adulterous or between unmarried young adults. One would think that it was common knowledge by now that unprotected sex is accompanied by a laundry list of perils. Unwanted pregnancies, embarrassing venereal diseases, lurking herpes and the stigmatic HIV bug. But with the purchase of condoms still weighed down by ignorant perceptions it is no wonder that those valuable sheaths continue to feature in the list of shame and are becoming more of an inconvenience to obtain than a necessity.

It is especially difficult for young women trying to negotiate their sexual right to protection. Which is why the female condom campaign is a rather long shot here. The assumption is that the man who proposes sex should take the trouble of availing the rubbers. But in the instant hook up dating culture, guys rarely think that far in advance. Young women know they should have a back up supply but they seldom stock up. When I asked some friends the reason for this, they said, “It scares the average guy away.” This is not exaggeration. Many women faced with a choice between reputation and protection, chose the former. Therefore when an active male college student reported that his average one night-stand candidate was not exactly hung up on protection, I sighed. The obvious conclusion is that several younger women still associate condom purchase with promiscuity as opposed to protection.

The prevention campaigns work with the naïve notion that if one labels something as wrong and harmful people will avoid it. I have two words for them. Tobacco industry. Abstinence and faithfulness are core values that any society needs but until we get the moralists to stop preaching water while they quaff wine, marketers need to concentrate on making condom purchase a less trying experience especially for women.

3 thoughts on “Condoms – A Guilt Purchase”