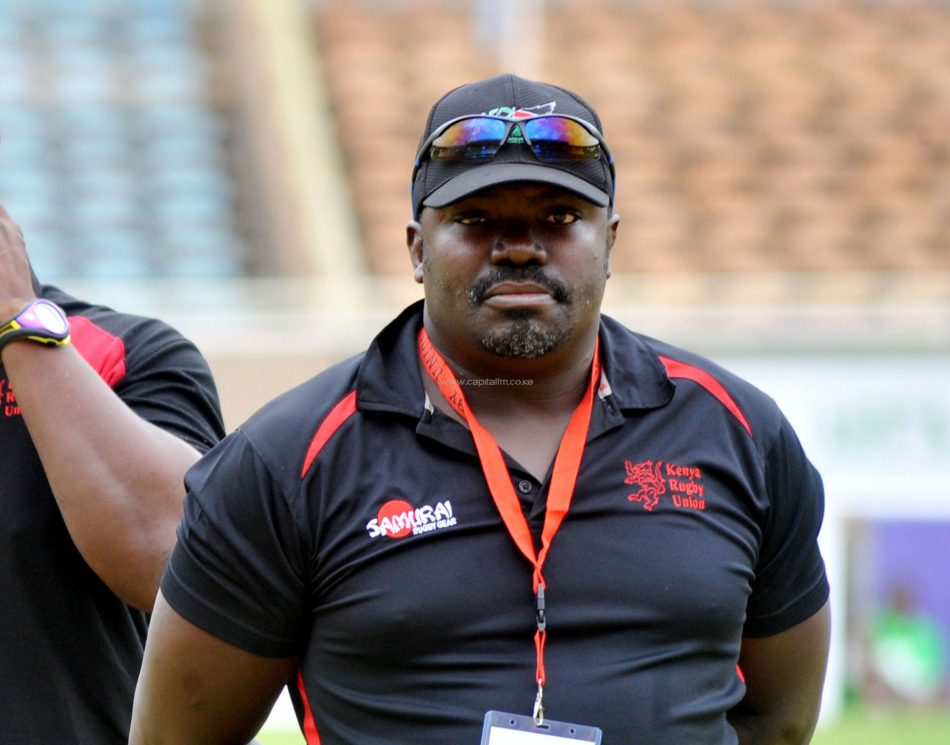 On April 17th 2016, the Kenyan rugby fraternity was ecstatic. It felt good to be Kenyan. We had finally arrived. The impossible had been achieved.  Kenya 7s had won the main Cup at HSBC finals at the Singapore Sevens, against the formidable Fiji, the most successful rugby sevens playing nation in the world.

In the iconic picture, now a part of the annals of great Kenyan sporting moments, is the entire team in dominant red colour of the national flag, their fists raised and joy painted on their faces. In the centre, stands team captain Andrew Amonde holding the trophy high above his head flanked by former captain Humphrey Kayange.

On the extreme right of the picture, standing at the back, partly hidden by the jubilant frame of team physio Lameck Bogonko, is the man responsible for that victory, coach Benjamin Otieno Ayimba better known as Benja.

Head coach of Kenya Sevens and the first and only Kenya Sevens coach to lift the World Sevens Series. The position was typical of Ayimba’s graciousness. Every member of his team would have a spot on the podium, no matter how fringe their contribution may have been.

The road to Singapore was 20 years in the making. Singapore was Benja’s first international assignment in 1996. It was a dismal outing for Kenya. His coach then, Mike Tank Otieno described him as focused, intense, disciplined and a quick study. Those traits would come to epitomise his career both as player and coach.

Benja was a master of iterations and applied the principle of continuous improvement.

Andrew ‘Ndiri’ Ondiek, one of Kenya’s most outstanding No.8s and the man whose position Benja inherited in the national team recalls an incident during a Kenya Cup game. Impala had suffered a bruising loss to a well oiled Mean Machine. Benja who played for Impala sought out the Machine backrow player and asked why it was so difficult to tackle him during the game whilst taking mental notes. By the following season, Impala marshalled by Benja, was handing out regular upsets, on the road to becoming genuine title contenders.

In 2008, assailed by sceptics who believed he would face eminent failure as coach, a sports journalist asked what he would do differently. His response was accountability. He would take responsibility for any loss the team suffered and Kenya suffered some humiliating losses before the grand moment in Singapore. All through the dark episodes, Benja shielded his boys from criticism from the fans and the rugby union administration.

Benjamin Ayimba’s contribution to the advancement of Kenyan rugby and sport is enormous. He gave his life to rugby when fell in love with the game 30 years ago as a student in Maseno high school. At every juncture, he pushed his team forward. Maseno high school had no rugby pedigree before Benja appeared. He left them as national champs who lost a final narrowly to Nakuru High in 1993. Impala Rugby Club, was playing in second division Eric Shirley Shield when Benja arrived and as a 20 year old captain, he brought Impala to the Kenya Cup where they went on to sweep every trophy on offer.

Sevens glory is usually the domain of the backs but Benja was part of the new generation of forwards, with ball handling skills of backline players, extremely agile and mobile, modelling himself after New Zealand and All Black legend, Zinzan Brooke.

Benjamin Ayimba was part of the winning squad at the Safari Sevens in 1997. He was a member of every Kenya Sevens team between 1996 and 2011 and represented Kenya at four consecutive Commonwealth games in 1998, 2002, 2006 and 2010. He was a member of the inaugural team to the Rugby World Cup in 2001 in Argentina where he scored Kenya’s first try against South Korea. He represented Kenya at two more World Cups and was head coach at our high points when Kenya made its first IRB Sevens Series Main Cup Final in Adelaide, Australia in 2009 and earned the third place finish at Rugby World Cup in 2009 in Dubai and eventually a main Cup trophy in 2016 in Singapore. He played 38 times for Kenya leading them 21 times.

Benja surpassed any other player and coach in terms of honours, straddling three generations. He was part of the second wave of sevens rugby that put Kenya on the international map taking over from the pioneering Watembezi generation who morphed into Kenya Sevens during 1986 Hong Kong Sevens.

He was a permanent fixture during Kenya’s return to the international sevens rugby scene. He was a Kenya Shujaa veteran when the new generation comprising the likes of Collin Injera, Humphrey Kayange, Lavin Asego and Andrew Amonde emerged. After his coaching stints, his proteges from Impala and Kenya, Mitch Ocholla and Innocent ‘Namcos’ Simiyu would also make their mark as Kenyan Sevens national coaches.

During my brief spell as an editor of Kenya lifestyle magazine, Adam, Benjamin became one of the only two sports personalities to unanimously make the cover profile. Paul Tergat was the other. The theme of the June issue of 2008 was fatherhood. At the time, we positioned Ayimba as a young father who had made a career out of rugby and transitioned from player to coach in an exemplary manner.

Now in hindsight, I ponder on his role as a big brother and leader to the generation that he played alongside and a father figure to the hundreds who thrived under his tutelage as coach.

Benja should not have died. Not this way, not this young. It is difficult to put in words how devastating this loss is, not just to his immediate family, the rugby and sports fraternity but to the country. We are a nation badly in need of father figures with a measure of integrity. In a country at war with its best, intentionally extinguishing its brightest lights, there are not enough heroes in the public domain to inspire the masses to see beyond the state of despondency and cynical disillusion that has come to define the lives of the young in modern Kenya.

Benjamin Ayimba’s death is a consequence of systemic failure culminating in a dysfunctional health system brought about by our adopted neo-liberal culture of greed. The public performance of the political class, jostling to send their messages of condolences after his death announcement as his hospital bill remained unpaid illustrated the tragedy of national heroism.

Sports professionals for all their glory are subject to the same highly unsafe and exploitative work conditions affecting all workers under the conditions of capitalism.

Why would a beloved Kenyan, who attracts the personal attention of the head of state become saddled with a medical debt running into the millions? It is sobering that the gallant rugby dynamo would succumb to disease that was as commonplace as malaria.

Not even the privilege of the national honour of the Order of the Golden Warrior of Kenya(OGW) and his personal acquaintance with the country’s top leadership could save Benja from this fate. A man who handled his public and personal failures gracefully, would become a victim of state failure.

It is the recurring epilogue of our sports men and women, devoting the best years of their lives, making sacrifices for national honours, for something larger than themselves and from a place of love.

What does one do, when a country does not love you back?

In the wake of his death, at the young age of 44, I have been left reminiscing on his legacy. As streams of tributes are read in the wake of his tragic passing, the focus has been on his successes. It is a stellar career by any measure and one that I would dare say, deserves to be the impetus for the establishment of Kenya’s Rugby Hall of Fame, that is long overdue.

However, Benja’s other enviable quality, was how he handled failure. Both privately and in his public life, Benja was the comeback king and this perhaps is why his death left the fraternity reeling in disbelief. Most people assumed that Benja would pull through, as he always does.

Of the many accounts I have come across, this particular one struck me as an apt depiction of the selflessness that Benjamin Ayimba embodied.

The account was told by former Impala hooker, Willy Ombisi.

During pre-season training, a talented rookie player joined Impala with zeal, displaying dazzling skills and embarrassing some of the senior players. The players were divided into opposing teams of potentials in competition for the first team jersey where a plot was hatched by the Impala veterans playing on the opposing side to introduce the young buck to the truth of club rugby.

In the run of play, Sammy Migz, playing at fly half, received the ball off the back of a scrum. As the opposing fly half rushed at him and he easily evaded the tackle with a sidestep off his right foot into the space, where veteran winger Oscar Osir was approaching for a cover tackle and the young flyhalf repeated the same sidestep off his right foot dodging the winger and landing into what in rugby speak is known as the pseudo-gap putting him the inevitable path of collision with a loose forward. It was precisely where they wanted him.

Lurking on the wings, waiting to demolish this flamboyant run of play was a bone crushing flanker, the late Samson ‘Chum Reru’ Opondo.

Benja, who was playing on the rookie’s side running off his shoulder in support, caught a glimpse of Chum Reru moving at top speed closing the false gap headed straight for an oblivious flyhalf. It was a split second decision. He stretched out his hand, grabbed the edge of the fly half’s jersey, pulling him into his body and cradling him at the precise moment that Chum Reru made contact.

Benja’s body absorbed the impact of the devastating tackle. Both players were left stunned on the ground for a few moments after the collision but the young fly half had just survived a tackle that would have probably put him out for a season and dented his confidence. Benja had put his body on the line for the rookie and this was an act he repeated over and over again in more ways than one.

In arena of sports, games fade away but how those fleeting moments made us feel, stay with us long after our champions are gone.

It is why we mourn Benja deeply but with profound gratitude for the generosity of his spirit, his repeated acts of selflessness and the enrichment he brought to our lives.

5 thoughts on “Benjamin Ayimba: The Making of a Rugby Great”