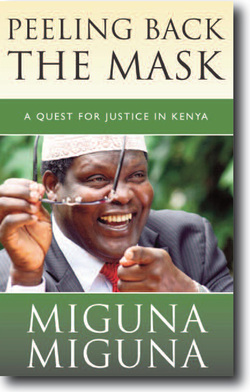 The latest tell-all book on coalition intrigues, “Peeling Back the Mask” by Miguna Miguna, a former aide to the Prime Minister Raila Odinga has the country buzzing with excitement because everyone relishes a good scandal. The Kibaki presidency has provided ample fodder for investigative journalists’ but interestingly nothing out the Moi ‘error’ seems to be rolling out from the publishers. As expected, one look at the price tag, pegged at kshs 3300 and most Kenyans decided there was really no point of buying a personal copy when one could glean extracts off Twitter, Facebook, random blogs and serialized pages. For the PM’s supporters who find Miguna’s abrasive’s nature annoying, the entire text will be dismissed based on a few choice lines. On the other hand, for Raila Odinga’s critics who have a score to settle, Miguna joins the league of John Githongo, uncelebrated whistle blowers putting their reputation and lives on the line to expose the filth of the political elite. In a country like Kenya where gossip is headline news, Miguna’s book ‘Peeling back the Mask” is positioned to become a classic. In Kenyan-speak, a classic, to paraphrase Mark Twain is a book everyone has an opinion about that very few have actually read.

5 thoughts on “Another Classic We Won’t Buy”