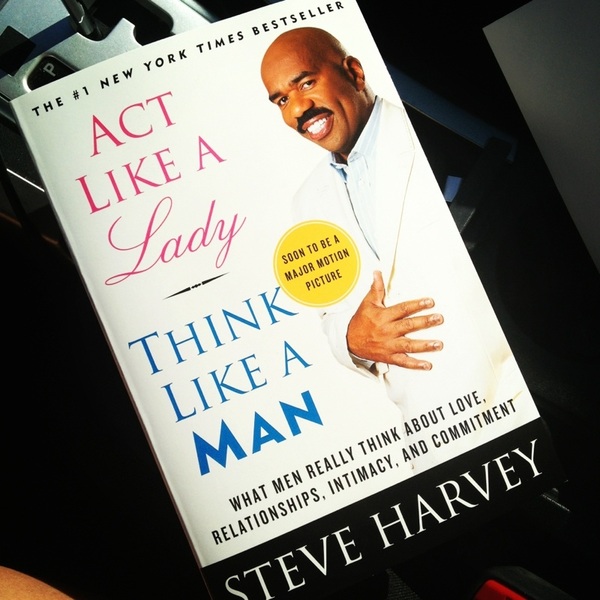 I finally got around to reading American comedian’s Steve Harvey’s best seller, Act like a Lady, Think like Man. In the end, it really boiled down to one simple statement. Men are simple creatures. At this rate, we certainly need to arm men with arsenal to survive the dating minefield. It takes two to tango. Something along the lines of “Act like a Man, Think like a Lady”.

There are a few things most women wish men knew. It is okay to embrace your emotional side. Shedding a few tears every leap year is healthy. It cleans out the pores. Bottling up everything may work for macho movies toughies but the enlightened man knows that sometimes, when stuff gets to you, let the tears flow. Learn to let go, look the other way and forgive. Our partners will never be perfect and everyone will make errors often. Don’t make the mistake of always seeking faults to satiate your ego’s sense of superiority.  People screw up and that is just human nature.

Becoming a stud in bed is great. Lasting round after round is impressive but sometimes women just want the simple stuff. The hugs, the kisses, holding hands, cuddly stuff. Extended foreplay is about the only thing you can never go wrong with and a man who learns to savour moments in bed leaves a more lasting impression. The journey is the destination in this case.

Despite women egging on about independence, most still want a man to assert his worth in the relationship. So step up. Women want men to be men and just because she criticizes and complains does not mean you have succumb to every little demand. It helps to stand your ground, have a mind of your own and articulate what you want. Women respect that.

It is okay to talk about your problems even when you have no idea how to resolve them. By putting the issues out there, it takes the weight off and sometimes it is never really that serious. Paying attention makes a hell lot of a difference. Listen to her. The power of recall comes from being present in the first place. Put some effort into those special moments. It does not have to be expensive. All it has to be is thoughtful, ultimately, women are also simple creatures. They just want to feel loved and appreciated.