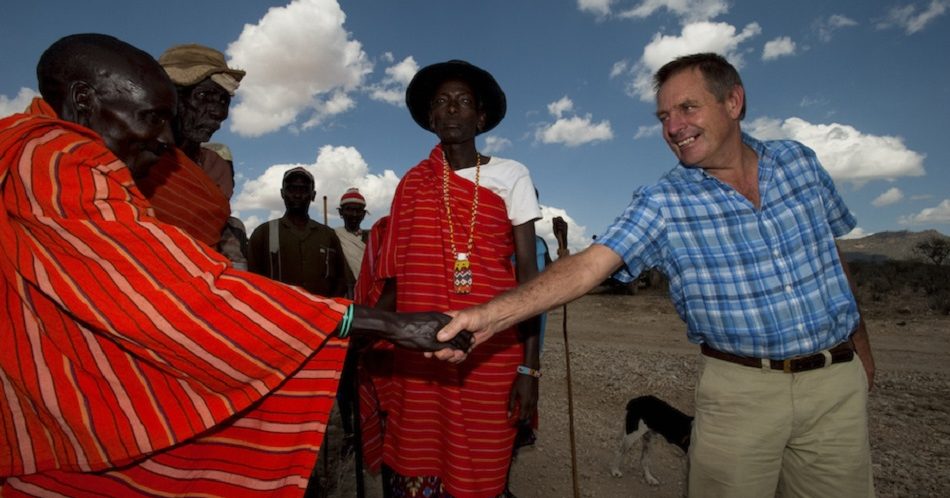 The Impala viewpoint offers a compelling sight and I trained my eyes, trying to spot some wildlife. A few KWS staffers who were gathered all seemed to be taking a good long look into the horizon. One wildlife photographer, captured the sentiment with a nostalgic comment,

“This used to be the place to take the best pictures. Now instead of shooting animals, we will be shooting the SGR”.

There were few chuckles. Mostly at the inevitability of the Chinese built Standard Gauge Railway line changing the ecosystem of the park forever. I sensed a deep sense of failure among some KWS staffers, many voicing their concern in hushed tones, certain the park would not survive the onslaught of ‘development’.

The ceremony was running fashionably late and I bumped into former KWS director Juluis Kipng’etich, who is now the Uchumi CEO in the parking lot.  Juluis Kipng’etich (Kip) was the poster child of Kenyan conservation during his tenure as director at Kenya Wildlife Service from 2005 to 2012 when he resigned to take up a position at Equity Bank.

Kip was credited with transforming KWS from a malfunctioning organisation into a respected corporate brand. During my stint as the editor of the now defunct Adam magazine, we had Kipng’etich on the cover.

There was a vibrancy to Kip in the midst of the lethargy in public service that we had not witnessed previously. But what made him material for a cover story, was the refreshing face of a competent African, getting the conservation accolades for a change.

I was in attendance, when he unveiled a Heroes statue in memory of KWS officers who had died on the frontier. KWS was on the move then. Today, not so much. Kipng’etich was reflective when I asked him about the anniversary celebrations.

When the ceremony eventually started, the KWS director Kitili Mbathi anchored his address around a breakfast in the park special visit made by the Togolese president Faure Gnassingb’e and the special place Nairobi holds as the only city in the world with a national park. The guest of honour Cabinet Secretary for Environment, Prof Judy Wakhungu managed to deliver an optimistic speech without making a single reference to the impending railway line construction.

The audience listened, all too aware of the elephant in the room that everyone was pretending not to see.

I was the guest of Jim Justus Nyamu, the founder of the Elephant Neighbors Centre, who had become the face of a campaign dubbed “Ivory belongs To Elephants”. Nyamu was a former KWS elephant scientist and researcher whose primary job was reduced to counting elephants and tracking their movement. He eventually resigned to start his own organisation, once he realised the limitation of the existing conservation model.

The big beasts that had for centuries, roamed the country on dedicated paths were now in constant conflict with ordinary rural folk. The narrative of protecting elephants for tourist dollars was not persuasive among local people suffering loss of property and lives after encounters with elephants. There was a big disconnection with the reality of public in understanding the value of wildlife conservation but conservation could not left solely in the hands of the ‘experts’.

People had to get involved. 70 per cent of the Kenya’s wildlife lie outside KWS parks and the service is stretched in capacity and resource. Jim was seeking to create a different model around the problem.

“The people who can make a real difference are the communities but no one is talking to them. Especially the children. They are the only ones who still have time to make a difference”.

So he decided to walk and talk to local people urging them to take ownership of their wildlife heritage and have a say. Jim has so far covered over 9000kms in Kenya, 900kms in the US, in addition to an epic 3200km foot journey across East Africa.

When I met him last, in early April 2017, it was at the flag off of his 13th walk (617kms) to Marsabit at the National Museums of Kenya headquarters in Nairobi.  The Museum was the home to the iconic Ahmed of Marsabit, a living monument and the only elephant to be put under protection by a presidential decree. In 1970, President Jomo Kenyatta ordered state security to protect this giant beast against poachers. Ahmed died at age of 65 four years later. A giant fiberglass cast of Ahmed is on display at the National Museums. Jim’s was drawing his inspiration from Ahmed and raising awareness on the dwindling numbers of elephants in the Marsabit eco-system.

The Irish ambassador, Vincent O’Neill was the guest of honour, a lanky man, who set off Jim after reading out an Irish travellers blessing. After walking with the small group of volunteers and supporters, blowing whistles, blaring horns, hogging a lane marshalled by police outriders on BMWs, I bid my farewell to Jim on Thika Road and wished him journey mercies.

Moments before the flag off, I had walked into a bookshop at the Museum in search of a book that had caused a stir in the African conservation world. It was a thought provoking book co-authored by John Mbaria and Dr. Mordecai Ogada titled “The Big Conservation Lie”.

“The Big Conservation Lie” was a book challenging the western paradigms and values that had dominated the management and conservation model since Kenya was declared a British colony. I had heard of John Mbaria by reputation. He was an investigative journalist who had earned his stripes as fury critic of the ‘western’ conservation model and a staunch advocate of a return to an indigenous inspired model.

I had met his co-author Mordecai Ogada, during a panel session at British Institute of Eastern Africa, where he presented a very compelling account of the racial tainted difference between a bush meat hunter and a sports hunter. The man who hunts for his food is ‘bad’ while the other who hunts for trophies is ‘good’. Mordecai Ogada was a carnivore ecologist and a big advocate of community based conservation.

The book is a page turner and revolves around a central argument of historic racial prejudices in the Kenyan conservation industry which alienate indigenous people as important partners in conservation. It goes on an investigative discourse of Kenya’s conservation legacy, showing how the inherited conservation model was intertwined with colonial power structures.

“Many modern wildlife parks were initially hunting grounds and created for recreation for the settler communities”.

The establishment of national parks was a form of land grab that disregarded the local communities’ ancestral claim to the land.

Mbaria and Mordecai confront the conservation crisis head on. They question the unholy alliance of wildlife conservation NGOs and Western funding streams pushing the paradigm that states that resident local communities must earn money from wildlife as motivation for conservation.

Mbaria poignantly asks, “How did wildlife survive for millennia in Kenya rangelands together with people who never earned anything from it?”

Dr.Ogada was frank when I asked him about his motivation for writing the book.

“I think it is when I realized that because of the colour of my skin, I was not likely to ever be acknowledged as a significant contributor to our conservation discourse in Kenya”.

Some of Dr.Ogada’s inspirations were the late Samson Ole Sisina, the KWS officer killed by Tom Cholmondeley and Elizabeth Leitoro who used to work for KWS and busted a poaching ring east of Nairobi National park that used to supply game meat to high end Nairobi restaurants. John Mbaria added that KWS has some of the best scientists that no one outside the industry ever gets to hear about.

Mbaria and Ogada are keen to start a national conversation. “Our mission is not an avenue for accolades but for our survival. It is a national security issue”, stresses John Mbaria.

“The big problem with our conservation model is that it is alien, not inspired by traditional culture”.

The conservation crisis in Kenya is real and it can only get worse in the face what Dr. Ogada describes as the perfect storm of climate change, a policy vacuum, ethnic politics and elitist approach to conservation.

But hopefully, there is a quiet uprising of local Kenyans moving from the back of the bus to their rightful place as leaders in conservation. It seems clear in the minds of all these men I have encountered that Kenyans can no longer be bystanders, outsourcing conservation knowledge.

Article first published in the Standard Media Newspaper on April 30th, 2017. This version has been updated.

7 thoughts on “Why are all the black faces in conservation in the background?”