I have been watching with a mix of shock and dismay as racism in America bubbles to the surface after the Ferguson, Missouri incident with highly publicized extra judicial killings of black people by police and vigilantes that culminated in huge protests nationwide. Many people in Africa can relate deeply to the issues raised and join in solidarity challenging stereotypes about the African heritage. Misplaced context is something Africans encounter every time they read about the happenings on their continent in Western press. The western media established a tradition of bias, reducing complex issues to lazy stereotypes and a single African story. Imagine a turn on the stereotype….

WHAT WOULD HAVE THE NEWS REPORT LOOKED LIKE IF AMERICA  RACE PROTESTS WERE HAPPENING IN AFRICA?

Mr. Obama, the first president from the Bratha minority tribe to elected, had been accused of allowing the police to orchestrate and institutionalize a wave of ethnic driven violence against civilians after hotly contested elections in 2008.  Mr. Obama, one of the richest Bratha in America, has always tried to distance himself from the killings instituted by his police force. Many of the killings committed by his police force, also involve extreme brutality reminiscent of the infamous Rodney King incident in 1992.

The roots of the ethnic animosity go back to 2008, when Obama challenged the status quo as the first candidate for high office from the Bratha tribe. In America’s 200 year history, members of the Bratha tribe have often been treated as underclass citizens by the state. His opponent, John McCain, was a rich, populist opposition leader from the rival Odiero ethnic group who have dominated the country’s politics since independence from the British in 1776. Most analysts said that Mr. Obama had won fairly but that McCain allies vowed to place roadblocks and frustrate his efforts to run the country. The law enforcement agencies in the country are dominated by members of the Odiero tribe.

Ondiegi Otoyo, a prominent African human rights lawyer for the victims, said that “Bratha tribesmen are disproportionately represented among those targeted as criminal suspects and fired upon or struck by police gunfire”. Mr. Otoyo lamented that “tens of thousands of young men from the Bratha tribe are targeted daily for no reason other than that they belonged to the wrong tribe.”

“Men are choked in the streets, people are shot even with their hands in the air. Pregnant women harassed in traffic. Children are losing their fathers to the prison industrial system. The surviving victims of these crimes have received no justice from the US criminal justice system”, Mr. Otoyo asserted.

This comes as no surprise. The United States’ legal system is historically and at present a perpetrator of massive violence and imprisonment against Bratha ethnic group. Human rights activists from Africa are concerned with the injustice and ethnic bias in courtrooms and mechanisms of a tribal power structure. The presence of the first Bratha president and the first Bratha attorney general is not enough to command obedient silence of their grassroots supporters who are saying the killings must stop. This sense of anger spread immediately throughout the country with mass demonstrations organized from coast to coast.

Yet the Obama administration has initiated no concrete programs to improve the plight of Bratha people despite pressure from the African Union for systemic changes particularly for young Bratha men, who remain trapped in low-wage employment, joblessness, poverty and deadly ethnic profiling policies carried out by police and the courts leading to the use of lethal force and mass incarceration.

President Obama’s has been accused by African leaders of not doing enough to stop the killings. The escalating waves of bloodshed has ruined America’s image abroad and several African countries have issued travel advisories warning their citizens against non-essential travel to the US.

America has a long history of ethnic conflict. Much of America’s news media is itself divided along ethnic lines and outside of a handful of responsible news outlets, most are addicted to sensational celebrity affairs and ethnic power struggles that dominate the news cycle. Some are dedicated to portraying Obama as a tribalist out to undermine established Odiero privilege and heritage in the country.

African leaders issued a thinly veiled threat stating that tribalism, selective justice and institutional oppression must be eradicated in America and those who wish to continue receiving aid from Africa must adhere to proper human rights. 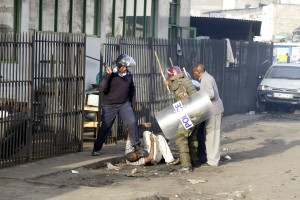