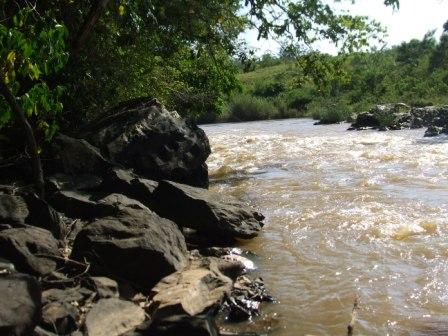 Most people can easily name five favourite destinations they would like to visit. However put out the question of a favourite river and many will draw a blank. Modern living does not offer much opportunity for meaningful interaction with rivers. In the cities they are practically open sewers. In the news, rivers are brought to our attention only after a devastating flood misfortune that results in scores of desperate villagers getting washed out. In school books, rivers are ranked by length, size, economic or historical significance. Alternatively they are romanticized and captured as beautiful snapshots of nature. I have a few those shots as mementos taken after gazing down at rush of water under a bridge or staring at the spectacle of a waterfall.

I developed a fascination for rivers early in life. After years of exploring several l decided l had a favourite river and the attachment has nothing do with some romantic boat cruise. I compare all rivers to the Mighty River Yala. It is not so mighty now, that I have seen the raging waters of the Nile and the sheer breath of the Mekong in South East Asia.  But river Yala embodies many happy memories. It’s a symbolic part of the place I call home. My ancestral roots are located in Sinaga valley of Siaya county in the Western part of Kenya. The river forms the natural boundary between two villages and our family home stretches down to the rugged and steep river bank.

Growing up, I do not recall hearing any intriguing tales of the Yala. No mythical heroines emerged from the waters to impart deep social lessons. There were no annual religious ceremonies that drew pilgrims from far and beyond. There were no gory ones either or a monster of Loch Ness proportions. Crocodile mishaps were unheard of. The closest I heard to scary was a tale my uncle kept telling. He was on his way home from the booze den across the valley one moonlit night. Halfway through the river, three guys in white plunged in after him shouting, ‘don’t leave us here’. We caught the drift and resisted the urge to swim during moonlight.

The headwaters of the Yala River rise from an altitude of 3000m in the Mau forest complex to drain in at about 1000m into Lake Victoria. The basin covers an area of 3280 km. With that much water flowing past, one would imagine thriving business along its banks. Commercial enterprise is glaring absent on our stretch of river. Perhaps the rapids only navigable by kayak act as a deterrent. Most villagers hardly seem to notice its existence. The only fishermen I ever see on its banks are solitary creatures who keep all their catch for themselves.

A good part of my youth was spent getting acquainted with the waters of the Yala. As teenagers it became the closet thing we had to an initiation rite. The ability to swim cross its rapids waters was akin to a rite of passage. We faced the fear of unknown force of nature and quickly learnt our limitations. Few dared and those who accomplished the feat enjoyed a level of respect that was sufficient motivation for the gallant effort. Boys were restricted to the shallow banks where they could splash away merrily. Men swam to the opposite bank. Swimming was all about practical purposes. Men swam when they wanted to cross the river or to wash soap off their bodies. They were really good swimmers whose reputations preceded them. They swam effortlessly and drew admiration.  No one really pulled any stunts. They simply crossed the rivers during the dreaded rainy season and that is how they earned their stripes. Swimming was a skill of necessity typically amounting to an opportunistic act to get to the other side for a party or for the sheer thrill of an adrenaline rush.

Swimming trunks were generally considered vanity objects as the garment did not aid your swimming in any fashion whatsoever. It also meant that when you got to the opposite bank, you would have to wait at least a half hour for the piece of clothing to dry. Advanced swimmers simply tied their clothes on top their heads with a vine and strived to get across without causing a splash. Nudity was accepted around rivers because no one took a bath with their clothes on. There was no voyeurism because nudity did not evoke the allure that it did in urban spaces. Women usually enjoyed first user rights and when a woman or girl got to the bank before you, one had to change sites. The river was a shared resource so exclusive spots were not in existence. Whatever little exclusivity that existed was enjoyed by hardcore swimmers who had ridden over the fear of the unpredictable current.

The only reason our parents even let us anywhere near the waters was because there were no wayward wild animals like hippos. However they were designated swimming spots. Nobody ventured into uncharted waters unless they were some crazy aspiring-survivor-series types. Rivers were viewed locally as a force that could be malevolent or benign all with total disregard for human sentiment. The rules of swimming in a fast flowing river were based on pure common sense, which thankful is still prevalent in the countryside. We learnt through experience that when the waters seemed calm, the lurking danger was the under current. It was erratic, unknown and perfectly camouflaged. One underestimated its power to one’s own peril. The sheer embarrassment of drowning while naked was too much to contemplate. Distinct boulders served as water marks to gauge depth, speed and water volume. Others were clearly acknowledged points of no return. As for stray wild life, we learnt that snakes generally mind their business if you mind yours and crabs hide from humans. Since there were no life guards it was widely understood that safety was a personal responsibility.

Rivers are always in a state of flux and only the uninitiated believe that they can step into the same river twice. But it was not until I encountered ‘sick’ rivers, abused by human activity and festering with waterborne diseases that I came to appreciate the great physical condition of river Yala. A key factor of Yala’s salvation was its remoteness. Its banks were sparsely populated and it did not flow past any densely populated areas.

Even so, in the wake of climate change warnings, I have come to have more concern for its well-being. Water wars are intensifying in the scramble for diminishing natural resources and pollution that is as a result of industrial activity is on the rise. Economic prosperity is the singular aspiration placing rivers purely as natural resources to be harnessed to exhaustion. The whole green fad follows a largely aesthetic oriented approach and has become a new gimmick for making profit off the bandwagon of sustainability and conservation.  Little is preached about the interrelatedness between people and the natural world. Contemporary living disregards the time tested lessons from indigenous societies worldwide who understood intrinsically that the survival of a community across generations was a function of living harmonious with the nature. They developed norms and customs that motivated the respect for the natural world as an act of gratitude.

Even though rivers have a self cleansing system there is a limit to how much abuse they can take. When we kill our rivers, the ripple effect destroys plant and animal life in our lakes, oceans and ultimately ourselves. So, if there is a river that inspires you, do a little more than singing an ode. Make it your duty to keep as pristine as possible so that those who come after you may enjoy the same bountiful gifts of Mother Nature.