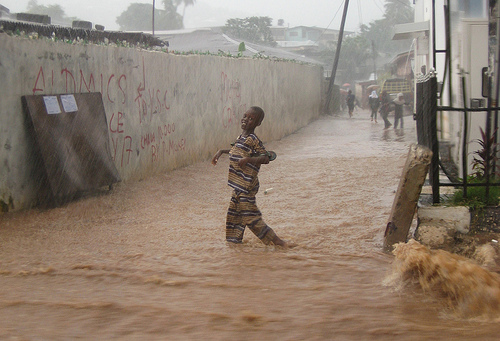 END_OF_DOCUMENT_TOKEN_TO_BE_REPLACED

The grave warnings have been trumpeted for months now. Between Moses Kuria’s ICC fixation shenanigans and the teachers strike, there was always room for a little warning from the authorities, El Nino is Coming. Newspapers have taken to playing up past images of flooded roads while TV broadcasts continue streaming the last minute, drain clearing activities around the city. The most important El Nino prevention tip as we have all learnt, is clearing public drainage of garbage and debris. Sometime this month, the deluge will be upon us and Nairobi does not cope well in wet weather.

In May 2015, a sudden downpour that lasted a few hours brought an entire section of the city to a standstill. Some drivers spent 9 hours trying to cover a 5km stretch. Motorists slept in their cars. School kids were stranded in a bus all night and the general traffic mayhem was epic. Witnesses claim that a little level headedness from drivers would have abated the traffic crisis but on Kenyan roads, no medals are handed out for courtesy. A whiff of rain and all rational thought is swept away as the repressed matatu maniac gene, goes viral. Everyone drives to the nearest traffic jam because there is company in numbers. A jam is a place where Nairobians make their daily contribution to global warming and inevitable climate change by idling engines and letting off steam on social media and radio talk shows.

I am obviously panicking with good reason especially following news that Sonko rescue team was disbanded and with the knowledge that traffic police men do not like to get wet. A deluge may be great for Kidero’s grass but disaster preparedness has got to mean more than clearing drains. Given the very explicit warnings, the ordinary citizen would have loved to see the government take more tangible measures other telling citizens to “exercise caution while driving on flooded roads”.

Interestingly, the government has already declared El Nino a national disaster before it has happened. I have lived through a few elections to know the smell of vested interests pervading the air around me. The buzzwords are  in circulation. When a government typically known for its inefficiencies and negligence starts to utter phrases such as, “We are sensitizing Kenyans, mobilizing resources in anticipation, constituting a multi sectorial force tasked to put in place mitigation measures’, rest assured there is money to be made. Call me a skeptic but victims of the 1997 El Nino disaster are still languishing in camps.

News reports stated that there was a 12 billion shilling emergency kit already allocated for repair of damaged roads and anticipated cost of destruction. I do not think the teachers were happy to receive that piece of news.

This past month, Eugene Wamalwa the Cabinet Secretary for Water and Irrigation led a team of senior government officers to Laikipia, Nyandarua and further afield to inspect 52 dams built by the colonial government that are badly in need of desilting. In Marsabit, they found Bakuli Dam full of sand and logs. The public was urged not to panic because the National Youth Service (NYS) would be deployed and all would end well. Of real importance, the CS urged, was to ensure that Kenyans made good use of the rain water.

Despite the timely advice, it will be difficult for the low level Kenyan hustler to cash in. There is only so many umbrellas you can sell. El Nino does not offer such clear cut opportunities as say devolved county governments. My advice would be to think smart.

Those who live in perennial water logged parts of Nairobi like Imara Daima estate be should collecting money to purchase canoes and rafts. This is a good time to figure out the high ground you will be parking your car. Crowdsourcing apps like Ma3route will be invaluable. Touch base with the snotty friends who drive 4 wheelers because there is no use taking your Madza Demio out for a swim. Anyone with kids living in a house situated next to a river should send them to bed wearing life jackets for good measure. A few floaters in the boot and snorkeling goggles in the boot of your car could be the difference between life and death.

The serikali saidia mentality will not save you. Do not be a sitting duck. You do not need a natural disaster to tell you what you already know.”Some people create their own storms and then get upset when it rains.”