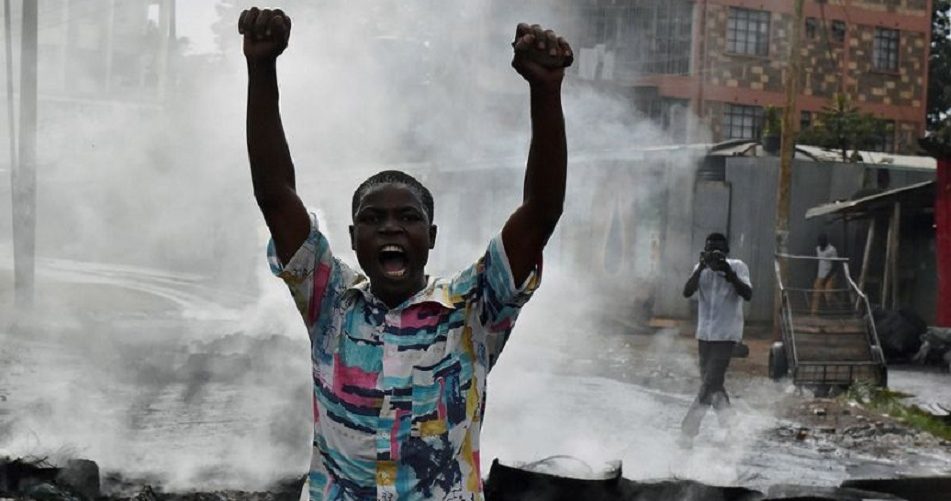 In a corrupt world, parents from socially marginalized neighbourhoods attempt to shield and teach their children from the consequences of delinquency and lawlessness. They teach them how to avoid bad influence and bad company and instill the importance of living an upright life. But even with all these concerns, there comes a time when parents become victims of circumstances beyond their control. When the election season arrives, the most good mothers can do is plead with their boys, to stay indoors. Do not protest and sometimes, that is hardly enough.

In the aftermath of the August 8th election, a day after a police operation on the 12th of August in Mathare’s 4C area, a friend invited me to witness a taste of their reality. My friend JJ is a community mobilizer who works as a first respondent dealing with social justice and human rights issues. We walked from house to house of the victims whose privacy had been breached and violated. Residents who were simply ethnic profiled and subjected to collective punishment over a political contest they really had no stake in.

One particular encounter stood out during this tour. As we approached the Councillor Ochola road that suffered the brunt of police brutality, we found several happy children playing on the open road. JJ stopped by one little girl, scrubbing a sufuria in front of their one roomed house. She had a bandage on her head. JJ summoned her for a closer examination, “A tear gas canister landed on her head” he told me.  8 year old Winfred had been hit by a tear gas canister shot into their house.  She almost lost consciousness and it took the quick wits of a neighbour who splashed her face with water continuously. We both marveled at children’s ability to move on after traumatic experiences.

A group of mothers living in the C area who had worked as peace ambassadors had warned all their boys to keep off the protests. They asked the boys who voted to return home and watch the proceedings on TV. Most had survived the violence of 2007. They all knew the trouble starts after the voting and it was best to stay out of the way until the temperatures receded. The experiences of previous elections had taught the painful lesson of becoming an innocent bystander. The anti riot police had locked down all roads leading to Mathare. There were occasional screams carrying from the distance, blasts gun fire and the heavy footsteps of men in pursuit.  At about 10 am, trouble would find them hiding under their beds behind closed doors.

A troop of agitated and armed police arrived ordering people out of their houses and forcibly entering the doors of those who did not respond. Young men were dragged out their single rooms and set upon viciously with clubs and kicks by men in uniform. They were lined up on the street like sacks of potatoes and rained on with clubs by another set of men. The children and mothers screamed pleading mercy as their boys were lead away to be beaten.  Some mothers were dragged out on to the street, made to lie face down as the young men in police boots trampled over their bodies, mocking their pleas for mercy.  The mothers kept pleading, “What have our boys done? What law have they broken?”

This is the normalized narrative behind election violence and it is repeated story of Mathare, Kibera, Kawangware, Nyalenda, Obunga, Kondele and Bangladesh slums. Every 4 years, poor and marginalized young Kenyan men are profiled and brutalized collectively and by association on the assumption of criminality. No prizes for guessing why young men in Kenya’s slums have a natural mistrust for men in uniform. All they have experienced is abuse, intimidation, cruelty, arrest and death at the hands of the police.

Kenya has to have the uncomfortable conversation about extra judicial killings,  election violence and its traumatic effects on our young generation. We are breeding a generation of angry young men and women on the receiving end of extreme violence. After the experiences of the 2017 elections, good parents in Kenya’s ghettos are telling their boys to learn how to organise and defend themselves for they are tired of becoming innocent victims.

The extreme anger we witness during those street confrontations is telling. We have sentenced an entire class of young men to be treated as disposable bodies, sacrificed every four years as foot soldiers of the overlords to pacify the larger population into a hollow and peaceful resolution of election disputes. The painful lesson of our toxic political climate is this. Hate begets hate. Violence begets violence.

What are we doing to our boys?

2 thoughts on “Of Angry Youth And Our Election Cycle”